We’ve all done it; land so hard we were sure something more than our pride was damaged. You taxi in looking to the picnic table, where all the critics usually sit, to see if anyone noticed how the earth shook when you hit …. landed. Now you’re tying the plane down and want to look her over for possible damage with out drawing too much attention. The important questions should be; exactly what are you looking for and at what point do you call your mechanic?

The subject of our hard landing inspection is a 2005 Cessna 172S that landed about 10 feet above the runway. During the ensuing fall, the right main gear touched first acting as a pivot point for the left main gear which hit next. Last to make impact was the nose gear with the main gear flattened out to the point the belly of the plane almost touched the ground. I typically see the nose gear with impact from the front, but in this case the tail was so low and the impact so strong, the nose wheel was pushed forward about two inches.

The student was able to taxi the plane to the ramp without difficulty. An initial walk around inspection didn’t reveal any obvious damage. The first realization occurred when looking at the plane from a distance and noticing the left wing about 12 inches closer to the ground than the right. The wings and lift struts were not bent but the massive steel tube of the left main gear was. The nose gear was raked forward to the point it looked like something straight out of a custom motor cycle shop. Now it’s time to do some official damage inspection.

The Cessna 172R/172S Service Manual section 5- 50-00 titled Unscheduled Maintenance Checks gives guidelines for hard landing inspections. Paragraph 2 A (1) states “A hard landing is any landing made when the sink rate is more than the permitted sink rate limit.” Unfortunately, the manual is written for mechanics and does not define excessive sink rate. As a pilot, I’m not sure I know what an excessive sink rate is, except of course that it will bend my airplane when I hit the ground.

The main gear struts are the heaviest and most robust single part of the aircraft, short of the engine. To bend a strut past its yield strength requires a landing hard enough to almost allow the belly of the plane to touch the ground, as happened to our subject 2005 172S.

The next most dense structure is the gear box in which the gear struts mount. The gear box is made up of several aluminum forgings riveted and bolted together with high strength fasteners. Usually the gear box survives an impact but the surrounding structure shows signs of deformation. If the impact is severe enough to damage the gear box assembly, the rest of the plane will likely be past concern.

The gear box assembly is a part of a larger assembly consisting of the cabin floor, forward doorposts, aft door posts, and the wing attach carry through spars. These parts create a type of roll cage that has saved many lives. I have a yard full of wrecked single engine Cessnas and other brand low wings. Many of the Cessna’s had impacts that destroyed the entire aircraft except the roll cage area with all aboard surviving. Several of the low wing planes simply slow rolled on their back crushing the cabin top to the bottom of the windows.

The weak link in the undercarriage system is definitely the mounting structure for the nose gear. In normal operation the light weight channels, bulkheads, belly skin and firewall the nose gear attaches to, is sufficient. However, it doesn’t take much extra force to  put wrinkles in the thin stainless steel firewall. A great deal of damage can be done to the firewall and internal support structure with no visible evidence on the outside of the plane. A detailed preflight inspect may not reveal any indication of a problem on the  external skins of the airplane. Take a quick glance at the firewall with the cowling off and any problems will be obvious.

The 182 series mounts the nose gear in a similar fashion as the 172. The original mounting design proved too weak for those pilots moving out of the relatively light 172 into the much more nose heavy 182. A few “wheelbarrow” landings and lateral waves began to show in the mid firewall area. In some cases the pilot may notice a sudden change in the feel of the elevator system. This can happen when the firewall bends changing the relative positions of certain pulleys and pivot points in the system. As a result, Cessna   generated service letter SE71-5 for installation of SK182-44 on 1962 through early  1970 models to add reinforcements to the firewall and center console. These reinforcements were added to the assembly line in 1970.

I think the weakest of all the single engine Cessna nose gear mounts is the fixed gear 177 Cardinal. The 177 also mounts the nose gear to the firewall but has almost no structure behind the firewall for direct support. On the 177, the hard landing stress transfers from nose gear through the firewall to the forward cabin side skins. An easy glance at those side skins tells a lot about how the plane has been handled. I had a customer a couple decades ago, that used a 177 for primary training. We replaced the lower firewall section and side skins four summers in a row.

If you have made one of those high sink rate landings and have the least concern about the integrity of the plane, at least perform a post flight inspection. Better to suck up the pride now than risk the next pilot unknowingly taking off in a bent airplane. Look at the firewall, the forward belly, the belly skins near the main gear, and the wing skins for any unusual waves or bends. Of course, to recognize unusual waves or bends requires that you are very familiar with what the plane looks like without the unusual. Whatever the nose gear is mounted to on your airplane, it is primary structure. If you find it bent or waved, your next call is to your mechanic. Some deflection in a structure might be acceptable, but that is a call that should be made by someone with the experience to know. 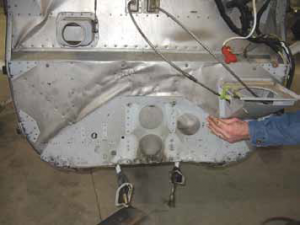 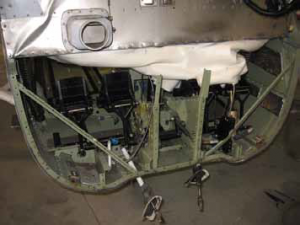 Lower firewall removed to see some of the damage inside. Also note the little pinched area on the upper firewall on the lower right side (left side of the photo). 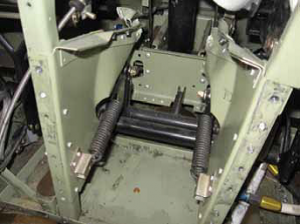 Damage to the center console area where the rudder pedal
torque tubes go through. 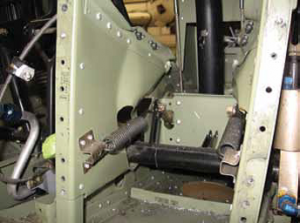 A close view of the center console damage. A lot of systems
depend on this structure for alignment. 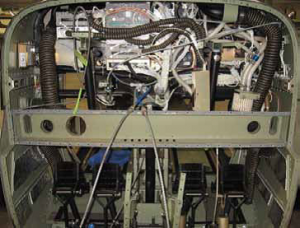 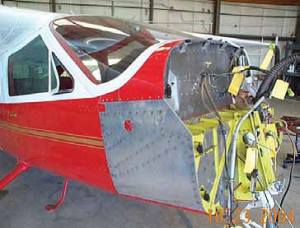 Cardinal with new firewall, side skins, and nose gear supports.

All of our strutted wing Cessnas come from the factory with a certain amount of waves and deflections in the wing skins. Your best hard landing inspection is the one you do before the hard landing. As mentioned about the nose gear mount, you need to be familiar with how the wing looks when it is good so you can better judge if it has endured some kind of extra stress. They are most likely to show problems at or just outboard of lift strut attachment on the forward spar. You may also see some diagonal waves in the outboard panels aft of the spar on top or bottom of the wing.

Don’t be bashful if you have any concern about the structure of your airplane. Once the aluminum is deformed from its intended shape its structural integrity is a total unknown. The stress to go from a bent structure to a failed structure is a stress you don’t want to explore.