Improperly installed or detached saddle pads are a serious and common cause of Cessna 210 main gear not successfully engaging the down locks. A partially detached pad can fold over which doubles the effective thickness and prevents the gear leg from getting far enough into the saddle. The gear down light won’t illuminate because the lock can’t engage the pin on the leg. When checked in the shop with the plane on jacks, the pad may find its proper position, and the problem won’t present itself. A few flights later it may happen again. Intermittent problems are troublesome and costly.

I’ve seen some interesting attempts to replace the saddle pads on the 210 main gear saddle shells, and even created a couple of my own. These can be properly replaced in the field, and Textron will provide the part number of the pad as well as the adhesive. They do not provide a specific procedure for replacing the pad, but it seems to fall within the FAA allowances for a certificated mechanic’s work scope. The procedure needed is as simple as following the adhesive manufacturer’s instructions for proper adhesion which is generally printed right on the side of the container.

Most of the unsuccessful saddle pad replacements that we’ve seen relate to use of inappropriate adhesive. There aren’t many adhesives that will bond the two different materials and stand up to the uneven compression and shear loads presented when the gear leg is in place. We’ve seen a few attempts at substitute pad material as well. These seem to fare much better than the alternate adhesives. Few of these substitutes seem to last very long.

The most interesting field replacement attempt we found is the one shown in the attached photo. Someone installed an unknown substitute material that is much harder than the original, actually hard enough to use rivets to attach it to the shield. It is also much thicker than the original which changed the rigging of the main gear down locks. The unapproved modification included drilling holes in the shell which rendered these assemblies unusable as cores for exchange.

One can purchase the shell assembly from Textron at a very high price. A more economical option is to find one of the few companies that will supply approved exchange shell assemblies. Field replacement is also doable if the shell is properly prepped, the correct adhesive is used, the correct pad is used, and the parts are vacuum bagged together while the adhesive fully cures.

A final step to ensure the longevity of the shell assembly is to properly position the saddle assembly relative to the gear leg. The gear leg should contact the center of the saddle with about a 70% contact area. The leg shouldn’t rub on either side of the pad as the leg enters into position in the saddle. When installed correctly, the original pads last for many years. 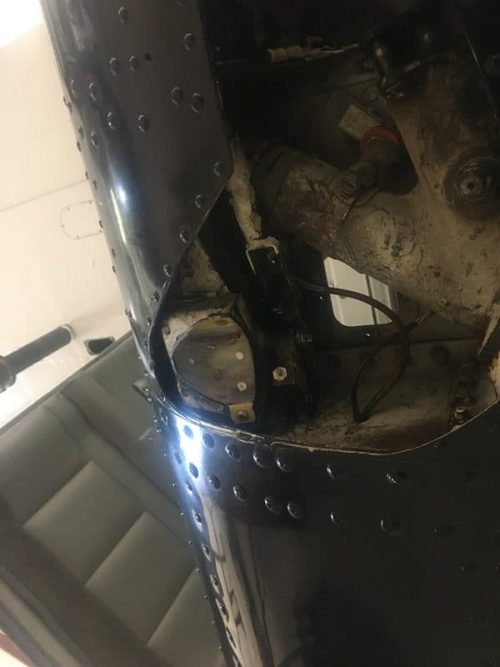