Flight by reference to traditional instruments requires at least two gyros; an attitude gyro and a directional gyro. These gyros need a power source for rotation which is traditionally an engine driven air pump. Air pumps are a major step above the venturi system they replace. Generally speaking, the pneumatic system is very reliable but there are several areas where a little neglected maintenance can force use of all that dreaded partial panel training you paid for.

There are two primary versions of aircraft pneumatic gyro systems both having almost identical components. As Cessna owners, we tend to think of our instrument system as a vacuum system while other brand airframe manufactures may install the components in reverse order giving a pressure system. Both have a pump, regulator, filter(s), gyros, and a gauge.

The pneumatic pump is commonly, and mistakenly, called a vacuum pump. Actually, the pump doesn’t know or care whether it’s installed to vacuum air out of the gyros or pressure air into them. Fortunately, gyros don’t know or care either as long as a sufficient volume of air moves with sufficient velocity across their impellers.

Don’t get the other instruments’ air system confused with the gyro system. The altimeter, airspeed indicator, and vertical speed indicator have an independent system which only senses ambient air pressure. The two systems are not connected in any way. (Don’t laugh, the pilot sitting next to you probably doesn’t know this.)

In a vacuum system, dirty air enters the main filter for cleaning then moves to the gyros. Most gyros have a filter built into their air inlet port for added protection. Debris is an absolute killer to the bearings and intricate parts inside the gyros. Then the air flow spins the gyros rotor and exits to the system regulator. 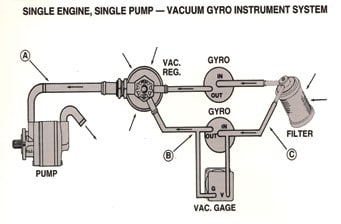 Following the air flow arrows from right to left: air is sucked into the main filter then divided to the two gyros’ inlet ports, where it gets filtered again. Then out through the regulator where more air is allowed in for pump unloading. Finally, into the pump then exhausted overboard.

The instrument air, along with some extra ambient air allowed in by the regulator, continues through the pump then is dumped overboard. The pump is capable of about twice the vacuum needed by the system at sea level so a regulator is installed to maintain a consistent supply for the gyros. As with any air pump, including turbochargers and the like, their longevity depends largely on system designs allowing minimum restriction to free air flow. The regulator allows a variable amount of air into the system after the gyros to maintain minimum load on the pump and proper flow through the gyros. 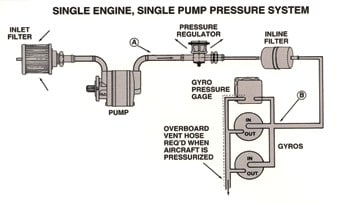 Follow the air flow arrows beginning on the left: air sucked into the pump filter then out to the pump. From the pump to the regulator where excess air is bled overboard. Next to the main instrument filter then to the gyros’ inlet ports, where it gets a final filtering. The gyros are spun and the air is blown overboard

Last in the vacuum system is the pneumatic pump. The types of pumps vary from dry to wet, vane to piston, and even the venturi. No mater which is installed, its air moving capacity must be capable of providing consistent energy for gyro operation in the thick air at sea level to the thin air at the aircraft’s service ceiling.

All of these components are plumbed together using hoses. The hoses are rarely even considered since they pretty much just sit there. As we’ll see later, their condition is very important to the longevity of the system and particularly the pump.

The pneumatic driven gyro system is one of the more straight forward systems in your plane. The regulators very rarely fail and the gyros’ reliability is fairly high but the pump  is a wear item with a high, but somewhat predictable failure rate. The pumps’ failure is so certain, every aircraft manufactures’ recommended inspection system includes replacement based on operation time.

Rapco is one of a hand full of companies still producing pneumatic pumps. A document written by Mike Lotzer is posted on the Rapco website listing the life expectancy of their pumps as installed on various engines.  Times range from 500 hours on six cylinder  TCM engines to 180 hours on four cylinder Lycomings. Pump life span in a properly maintained system is primarily a function of pump rotation speed and operation time. Basically, the vanes can spin around just so many times before they wear down locking the pump.

Pumps often fail due to debris inside causing friction which eventually stops the rotation. A nylon shaft between the pump rotator and the spline shaft in the engine acts as a fuseable link which fails when the pump gets about 2 revolutions behind the engine. The debris may be contaminates that made it past the filters, particles from deteriorating hoses, or dust created by the normal wear of the vanes. Rapco also published a service bulletin, SB RAS007, addressing rubber contaminates in pumps. With only 0.001″ to 0.003″ clearance between rotor and housing, a small amount of trash can easily take a pump out. 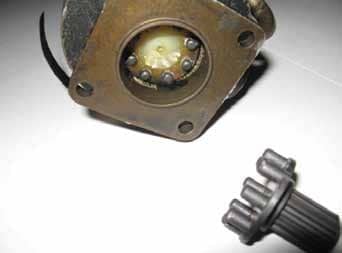 The splined shaft was originally connected to this pump via a white nylon linking shaft which you can see the remains of on the pump side.

The plumbing used to connect all the components is usually made with rubber which deteriorates, just like the tires. At some point in time these hoses WILL begin to come apart on the inside with the loose particles going directly to the pump. Most aircraft manufactures and hose producers agree on a hose life limit in the 8 to 10 year range. The majority of 1976 and newer Legacy Cessna coming through my shop for the first time still have the original hoses and an owner that wonders why his/her air pumps aren’t lasting very long.

When installing a replacement pump, all of the system hoses must be cleaned out. As a pump fails the airflow sending dust overboard from the pump suddenly stops. This dust just begins to float anywhere it wants to go and it usually wants to go upstream. A newly installed pump will suck this debris in with the first turn of the propeller. If the pump survives the first run it will certainly not last nearly as long as it should. Just an added note; the pump manufactures will deny warranty claims for any pump with the obvious signs of outside debris damage.

When a pump fails and the nylon shaft twists in two, the indication to the pilot is an immediate zero Hg reading on the suction gauge as the gyros begin to spool down. There is no question about what to do; cover the gyros with Post it Notes and focus on your partial panel procedures. As intimidating as partial panel flight is, it pales in comparison to flying partial panel when you don’t know part of the panel isn’t working. 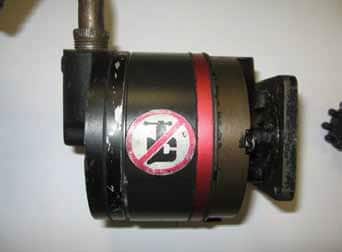 This decal originally warned against putting the pump in a vice, but years of operational experience has shown it to be a great temperature indicator. If the decal has a brownish color, the pump has been way too hot.

The gauge on the instrument panel only measures system pressure so you don’t actually know if air is moving through the gyros. Each gyros’ small filter screen built into its air inlet port can become obstructed if any debris gets past the primary system filter. As these individual instrument filters become restricted the regulator opens more to ensure the pump is not overly loaded. Eventually, all of the air needed by the pump may come through the regulator with none moving through the gyros. Unless you happen to have a gyro with an internal warning flag, there will be no indication of gyro system failure until the extreme precession becomes blatantly obvious to the pilot.

It can take as little as 50 operating hours with a mis-installed primary filter to allow enough carpet fuzz to cover both gyro inlet screens. An attitude gyro spooling up slower than usual is the only advance warning for this situation. In flight the slow turning gyros will display much greater precession and “lazy” operation. Either indication is difficult to recognize in flight and potentially far more dangerous than a total failure of the pump. 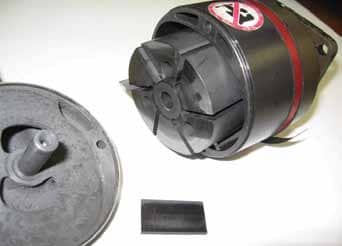 Pulling the unit apart shows the slotted rotor partially removed and one of the vanes laying on the table.

All the parts back in place except one vane. In case you’re wondering, turning the pump backwards does no harm. This pump has been spun backwards by hand for years with no damage yet.

The required preventive maintenance and flight precautions should seem obvious and relatively inexpensive after reading some typical failure modes of the pneumatic system. For emphasis to help keep the sunny side up: Ensure the pneumatic system is sealed against any foreign material passing the main filter, change the hoses at least every 10 years, and watch for changes in gyro behavior. Most importantly, make sure you are current and comfortable with partial panel flight operations. Even a well maintained system will eventually fail, so be prepared.