I received a call from an owner of a 1966 150F who said his mechanic had discovered rivet problems in the right wing main spar during annual inspection. The issues were so serious and wide spread there was potential the wing would be condemned. A devastating call to be sure, but one I am accustomed to receiving.

It was determined the wing had been in this condition for many years. The airplane has been with the current owner for at least three years and no knowledge of wing rivet replacement. The paint on the rivets is the same as the rest of the plane  with no sign of being disturbed. The condition of the paint job indicates it is at least 10 years old. The current mechanic was not comfortable attempting repairs associated with the wing spar. Since the plane had been flying this way for at least a decade and none of the problem rivets showed signs of movement, the mechanic signed off the plane as safe to fly under a Special Flight Permit for the one way trip to our shop for inspection.

The first thing we noticed was the oversize CherryMax rivets in the main spar where the leading edge skin overlaps the top aft skin. Several rivet heads weren’t fully seated as evidenced by our ability to get a finger nail under the edge of the head. Once in the hangar, the wing tip and few wing access plates were removed to view the inside. The 150 has very few access panels under the wing so inspection of the entire spar requires an intentional desire to see it. Now we can see what really concerned the mechanic.

At the inboard portion of the wing the rivets don’t protrude through the material of the spar cap. At first glance one would think there wasn’t a rivet in the hole at all. As we look further outboard we notice the rivets begin to show a bit. The spar cap thins as it goes towards the tip and the rivets in the last few feet look OK (relatively speaking). I’ve seen places where a short CherryMax was incorrectly installed but I’ve never seen 50 or more in the same part. This wing has our full attention. 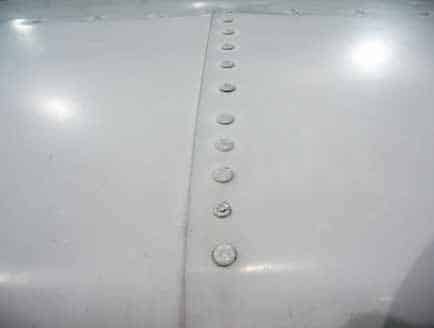 Just a few of the rivet heads not sitting down properly on the skin. Set “proud” as they say in Australia.

FAA and Approved vs. Acceptable

The decisions on airworthiness and repair schemes comes down to three basic questions: 1) have the original rivet hole sizes exceeded manufacturer limits, 2) do the oversized holes still have acceptable edge distance, and 3) are CherryMax type rivets allowed in these locations? The answers may seem obvious at first but we’ll consult the appropriate data before throwing away a wing. We’ll start with what the FAA requires, of course.

My first question is whether this repair meets the requirements for a major repair. A major repair requires FAA approved data and completion of an FAA Form 337. If it’s only a minor repair we only need to document accepted data and enter it in standard maintenance log book entry. Approved data might come in the form of an Airworthiness Directive, an STC, a repair order from an FAA Designated Engineering Representative (DER), or approved structural repair manual.

FAR 43 Appendix A paragraph (b) (1) defines major repairs and we’ll check one statement at a time. Does installing proper rivets in the wing spar involve any of the following: strengthening (no), reinforcing (no), or splicing (no) of primary structural members? Does it involve the replacement of primary structural members? No. Since it doesn’t qualify as a major repair due to the type of repair then we don’t need to continue through the list of qualifying repaired items. We now have confidence we are only dealing with a minor repair but we still need at least acceptable data to properly perform and document the repair in the log book.

Acceptable data would be industry accepted standard practices as found in the aircraft manufacturers service manual, FAA Advisory Circular 43.13-1B change 1, and other published aircraft maintenance information that has wide spread industry acceptance. The manufacturer’s maintenance manual is my first choice for accepted data because if we find what we need there we don’t have to go any farther.

The 150F maintenance manual is included with all the 100 series airplanes from 1963 through 1968 so the information we find there applies to all the 100 series planes of that vintage. Section 19 of the manual is for Structural Repair but unfortunately has no guidance on riveting or oversize rivet holes. It is industry accepted to use acceptable maintenance data in manuals from newer versions of the same or similar model aircraft if the data is directly applicable so we’ll look there next. 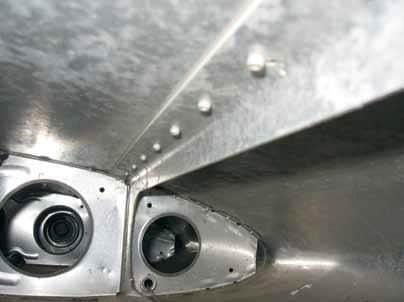 The outboard end of the spar with the tails of the blind rivets protruding correctly. Also note, installation of solid rivets here is very easy with access through the rib with the wing tip removed. 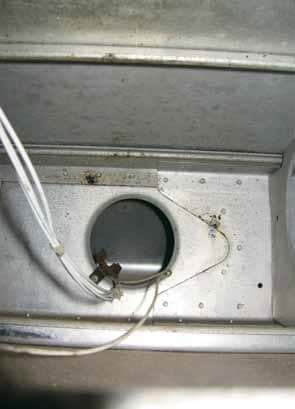 Notice some of the rivet tails just showing in the top of the wing spar flange but none showing on the bottom.

The service information for the Cessna 152 is the next closest model and has almost identical construction. In the 152 Service manual we find Section 17 paragraph 17-65 for fasteners but nothing of help directly related to our oversized rivet  holes. Paragraph 65A does have a statement in the last sentence that allows blind rivets (like CherryMax) of equal strength to replace the original solid rivets if there is no access to one side of the structure. There is also no statement limiting what type of structure these blind rivets may be used. Paragraph 17-65C a. allows for rivets of one size larger to be used if the original holes are damaged. It still requires rivets of equal strength. This is just what we are looking for.

We have all the proper data we need to make the repair but we still have about 6 feet of the spar that isn’t reachable from existing access openings. If we had the wing removed and mounted in a jig fixture, we’d drill the top outboard rear skin and lift it for very easy riveting of the spar rivets. We could make a case for installing proper size CherryMax in the inaccessible hole but wholesale use of these fasteners just irritates us sheet metal types. A couple of well placed new access  panels in the bottom of the wing would allow us to install almost 100% solid rivets as were installed at the factory. They’d be nice for future wing interior inspects too.

Early service manuals don’t have any guidance on installing extra holes in the wings so we’ll have to look elsewhere again. As it turns out, Cessna generated and Structural Repair Manual for the restart 172 series and chapter 57-00-00 paragraph 3 has all the information we need. It shows a doubler p/n S1443-1 and a cover p/n S225-4F can be installed on the bottom of the wing with a few limitations. Adding an inspection hole is an alteration to the airplane’s basic design so we’ll need to consult the FAA for approval.

First stop is back to FAR 43 Appendix A, but this time we’ll look at paragraph (a) (1) for definition of major alteration. Wouldn’t you know an alteration to the wing is #1 on the list? Life suddenly became more complicated as far as the paperwork goes. The repair of replacing the spar rivets is minor but the alteration to complete that repair is major. It could be argued this alteration does not involve primary structure and is therefore a minor alteration and one might win the argument. Unfortunately, that isn’t how the regulation reads so we’ll pursue an FAA Form 337 with some type of approved data.

The sources for approved data for a major alteration are the same as a major repair. In this case we either need documentation from an FAA DER or we could pursue a field approval. If this were a restart Cessna 172 we could use the  information found in the Structural Repair Manual as approved data and be done with it. The construction of the much newer 172 is almost identical to the older 150 and the newer approved repair will fit perfectly as designed in the structural manual. This is a prime candidate for a field approval by a knowledgeable FAA maintenance inspector at our local FAA Flight Standards District Office.

The FAA field approval process is a whole article in itself, but for our purposes it’s a means of getting this alteration approved without a DER. The FAA maintenance inspector can approve an alteration based on provided data, even if that data is only accepted and not approved. Our data is approved we just need the FAA to field approve its use on a different model airplane with almost identical design. A call to the FSDO yields a verbal agreement followed by very detailed written request with a 337 Form complete with all our data. It is returned with an FAA signature to which I add mine and we’re done. No worries. 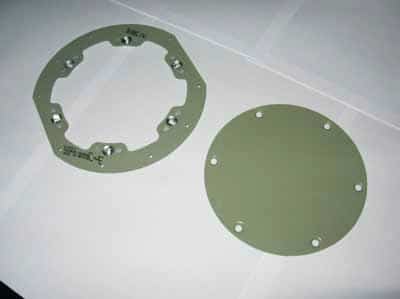 The new access panel support ring and the new cover panel to go with it.

With the difficult work completed we can start the repairs and alterations. It will take about a day to create holes in the bottom of the wing, dress the edges and make an even fit around the flush mounted access panels. The riveting of the wing spar will be done before the access panel reinforcement rings are installed to take advantage of the larger hole. Much DNA has been unwillingly deposited on edges of small access panels over the years so the larger the access holes the better.

Riveting the spar from end to end will take two mechanics just over a day. It isn’t so many rivets but even with the access holes the work is difficult and slow. The smart mechanic calls use of the rivet gun because the poor guy/gal with the  bucking bar has to do the worst of it. Holding a tungsten bar overhead, often with only 2 fingers, all day is a pain. Not to mention the arm needs to bend backwards at the elbow and the wrist should twist at least 90 degrees. A snake with fingers would be perfect.

This whole process must actually happen twice. Only every other rivet gets drilled out the first time. The remaining rivets are sufficient to hold the wings’ structure in alignment while the first set of rivets are replaced. Then the remaining  original rivets are removed and the second batch of new rivets is set in place.

Life would be so much easier if the first mechanic had at least installed correct length rivets. It’s obvious he never looked at the inside of the wing. I suspect it was a one man shop with little or no sheet metal experience. Installing standard solid rivets requires a helper and a certain skill set. Absent those two ingredients he/she chose the easy way out and just “popped” in a hundred or so blind rivets. “Blind” being the operative word in terms of inspection of ones work. As simple as blind rivet installation is; a certain level of competence, knowledge, workmanship and ethics is required.