Fitting a new door on a hand made airframe is always full of interesting challenges. Words like drilling, filing, bending, cussing (or at least thinking about it), de-burring, chamfering, repeat, always have some part in the process. This applies whether fitting a gear door, baggage door, or cabin door. There are many reasons for the level of difficulty involved and why every door & frame combination presents a different set of problems.I’ve fit used doors on used airplanes before with the understanding that it won’t be a particularly good fit. Installing factory new doors on an almost new 182T requires a much higher level of precision and carries an expectation of a higher quality fit.

The design for the cabin door opening is almost unchanged since the beginning of production of the legacy planes through the current production restarts. On the assembly line the opening in the cabin is undersized so there is enough material for some trimming to fit the door if needed.

During production, the door is set in place and skin material is removed from the door and some from the cabin until a continuous equal gap exists all the way around the door. There’s no specific formula or pattern so once a door and airframe are cut, they are a uniquely matched set. Most of my experience with cabin door replacement is fitting a serviceable door from a salvage yard to an older airplane. The door could be made to fit and operate, but the gaps around the edges would vary from 1/16″ to 1/4″. Usable, but not as aesthetically pleasing as one would like.

The first obvious step is to remove the original door. The old hinges are removed with the door because the new comes with new units. Unfortunately, they are not pre-installed on the new door. The hinges are a key issue as the new door has no markings or alignment guides of any kind for their installation. The door must be fit and trimmed then the hinges properly installed to maintain the doors position. This is a “one shot effort” and there are no “do over’s.” 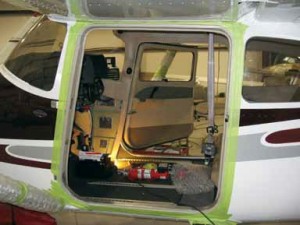 The pilot’s door removed and masking tape around the opening for marking purposes. Some bubble wrap around the lift strut “just in case.”

A few small special tools are needed to help ensure the door is someplace close to the correct position. A small block approximately 0.400″ thick can be used as a support spacer between the door and the cabin frame at the bottom of the door. Some other shimming tools will be helpful as well. We fabricated some using a couple of paint stir sticks taped together. The wooden sticks won’t mar the paint and are easy
to obtain.

During the fitting process, the new door is placed in position and removed again many times. The trim and fit is a fairly intimidating process because an over cut ruins a $5,000 + door, so a very gradual approach is called for. To allow for temporary cutting and alignment marks, a strip of 2″ wide tape is placed on the exterior cabin skins all the way around the door opening. This will also protect the aircraft paint from being damaged by the repeated placement of the door. I suggest covering the wheel fairing and wing strut as a precaution against paint rash as well. 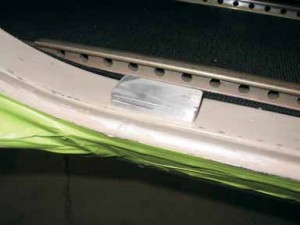 A 0.400″ thick spacer in place on the door seal to help the initial placement of the door.

Since the cabin opening has already been trimmed at the factory, all of our cuts are made on the door skin. The door is set in the cabin opening with the 0.400″ spacer placed on the bottom frame towards the front just before the upward curve the vertical door post. The fore and aft position is set so there is just enough room for the door alignment guides near the top of the forward edge of the door to clear it’s counterpart mounted on the cabin frame. This may leave a fairly large gap at the aft side of the door but the latch system can be adjusted for that later. The main latch bolt should be fairly close to the
center of the retaining bar on the aft cabin door post and the door latch release pin should just about center on the black striker plate.

The door is held in this position while a tracing is made around the door skin (definitely a 2 person job) onto the masking tape previously applied to the cabin opening perimeter. A few radial marks are made on the door and cabin as well, to ensure installation in the same location on subsequent installations. The door is removed so measurements can be taken from the tracing to the edge of the cabin skin. These measurements are then transferred to the door skin so we’ll know how much to trim. In a perfect world, the door skin will overlap the old door opening all the way around. 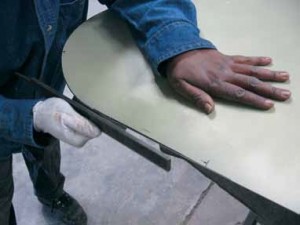 Hand filing with a vixen file. Always file to a mark. If the mark is filed away all reference is lost and excess material will be removed.

The leading edge of the door is trimmed to fit first with about a 1/16th” gap to the cabin skin. The upper and lower front corners are trimmed next. At this point the front of the door should fit inside the cabin opening. The hinges are bolted to the cabin and swung into contact with the door while in the closed position. With the door held in this position (another 2 person job) the new hinges can be drilled to fit and secure the new door.

The hinges are pre-drilled and countersunk from the factory.Be certain to check the depth of the countersink as they are often over cut. If the rivet is below the surface of the hinge the rivet set won’t make contact with the rivet and the security of the mount will be compromised. Once in position, one hole at a time is drilled and clecoed until all are completed. A Cleco is a temporary fastener used until the rivets are installed. 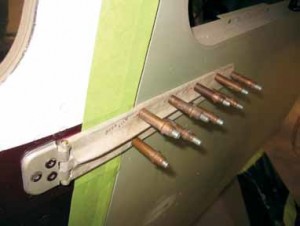 The door is now locked in position so it can be opened and closed with assurance it will land in the same place each time. The trimming process continues until the door can be closed with the same 1/16th” gap all the way around. If the new door’s outer skin was not quite large enough to cover the cabin opening there may be some areas where the gap is larger than the 1/16th”. In those areas there would have been no trimming of the new door as all the material would be needed to give as small a gap as possible.

The forward half of the lower door hinge at the pivot pin radius is not rounded on the inboard side. This “corner” may rub on the new door skin when the door is swung open. This may be resolved by dressing the “corner” of the hinge pin area or notching the door skin. I prefer a slight trimming of the hinge. The hinge rivets can now be installed as the majority of the door trimming is complete.

The cabin frame striker plate assembly must almost touch the door frame as the door closes. This is accomplished by adding shims of aluminum stock under the striker plate mount. These shims are fabricated in the field and installed as thick as needed for the desired effect.

After all the trimming, fitting, and de-burring are done the door comes off again for painting. The door is installed again for installation of the seal. Painting and proper seal installation is fodder for a future article and beyond the scope of today’s discussion.

I suspect you’ll probably never need to know any of this. I thought it valuable to understand the level of craftsmanship and tenacity required to make a door fit properly. In the end, it’s all arts and crafts kind of stuff. The T.L.A.R. System is absolutely the best approach. (T.L.A.R. ? That Looks About Right). Precision is important but not the kind achieved with rulers or micrometers. Installing the door just to function is easy enough but the real work is getting it to look right. A ruler is just going to muck it up. 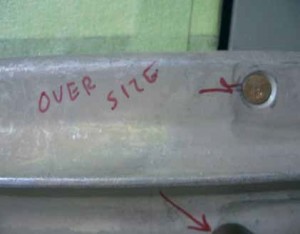 A rejected hinge due to rivet hole countersunk too deep