As I’m writing this article, we are just over two weeks into a flurry of communications with the FAA, CASA (Civil Aviation Safety Authority – Australia’s version of the FAA), and Transport Canada concerning some Cessna 210 wings that were found to have cracks in the lower spar caps. There is good information to show the Cessna cantilever wings are stronger than the strutted models. The cantilever wings show very well in the safety reports, and maintenance issues are minimal. There are the well known problems with the smoking rivets and forging attachment Huck pins but nothing catastrophic, until now.

It has come to Cessna’s and the FAA’s attention that there are reports of lower spar cracks in the Cessna 210 cantilever winged fleet. At the moment there are five confirmed reports from Australia and one from Canada. There is a sixth possible in Australia, but details weren’t available at this writing. There are no reports of any spar problems in the US fleet.

The 210 and 177 wings both have a primary I beam type spar. To see it without all the skins and ribs attached, it looks pretty much like any old run of the mill “I” beam. In this case though, the I beam is built up from several parts: the top cap, web and lower cap. Each piece, on its own, doesn’t have much strength or stability. Put them together, and the strength is amazing.

The spar web is the thin aluminum sheet that connects the upper spar cap to the lower spar cap. This web is only 0.032” thick, which is about the same as ten sheets of printer paper. It separates the upper cap from the lower by about eight inches and gives an attachment surface for most of the wing ribs. I’m sure the engineers in the audience could explain all the physics that allow such a flimsy piece of sheet aluminum to transform these parts into a major structural  heavyweight, but I enjoy believing it’s just magic.

The 210 and 177 spar caps are single piece aluminum extrusions that taper as they extend all the way to the wing tip. Their cross sectional shape changes the farther toward the wing tip you get. There is a consistent vertical part that attaches to the web, and an aft flange that create a support for the leading edge skin and aft skin to rivet to. The aft flange is only about 0.090” thick. The forward flange starts out at the inboard end as about 1/2” thick and dwindles away as it gets closer to the outboard end. There are no rivets or fasteners in the forward flange. The upper and lower spar caps are about the same design. 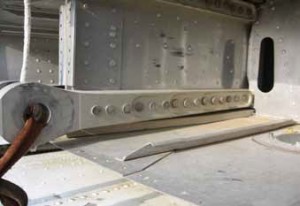 The lower spar cap as seen from the front side. The inboard wing butt rib is removed for easier viewing. The spar cap flange is that 1/2″ thick length of aluminum just below the wing attachment forging 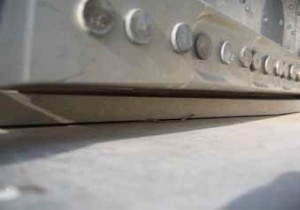 A closer view of the front side of the lower spar cap.

There are large forgings attached to the upper and lower spar caps at the inboard end of the wing that transfer all the flight loads to the cabin wing spar carry through. There is a forging on the front and rear side of each spar cap and is connected with 15 Huck pins that are each 5/16” in diameter. It is the spar cap in the area of these forgings that is the subject of the bulletin. These same forgings are partly to blame for making it more difficult to see and inspect the spar caps.

The flight and ground loads on the wings cause them to twist, bend up, bend down, bend aft, and various combinations of all those at different times. The most obvious to most of us is the upward bend caused by just the dynamic lift on the wing. It’s easy to imagine all the pressure under the wing pushing it upwards and that force transferring to the wing to cabin attach pins. The highest tension load is nearest the wing root on the lower spar cap. In this very simplified example the upper spar cap is in a compression load, and the lower is in tension. The tension tends to generate the type of stress needed to create cracks near rivet holes.

The lower spar cap as seen from the aft side of the spar. Again, the inboard wing butt rib is removed for easier viewing. The aft flange is that thin layer with all the rivet tails showing just below the wing attachment forging. One way to judge the concentration of stress in typical airframe structures is to note the size and frequency of the fasteners. With the possible exception of the landing gear box, there isn’t another place on the 210 or 177 where there are so many fasteners  installed so close together. The inboard portion of the wing uses #5 (5/32” diameter) rivets spaced only 3/4” apart plus the 30 “Huck pins” mounted in the attachment forgings that are 5/16” in diameter and mounted less than an inch apart, which are serious indicators of a high stress area. 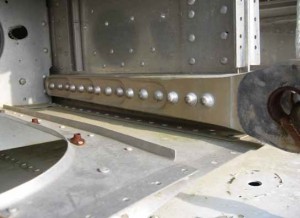 The lower spar cap as seen from the aft side of the spar. Again, the inboard wing butt rib is removed for easier viewing. The aft flange is that thin layer with all the rivet tails showing just below the wing attachment forging.

This same area has been the subject of several of my articles for smoking rivets and smoking wing pins. One was edited to create CPA Tech Note 210-T02 to detail a repair option for the smoking rivets that attach the wing skins to the spar caps. The takeaway here is that this area already has high stress indicators, and this latest spar cap attention is within the realm of expectations.

The urgency of the issue is that these airplanes were designed before the modern structural redundancy requirements of Part 23 were put in place. Now-a-days structures must be designed such that multiple layers can be inspected and a failure of one piece won’t cause failure of the entire structure.

A crack in the lower spar cap could turn catastrophic very quickly. The main issue is that cracks in aluminum are very unpredictable. A short crack may be stable for a long time, then suddenly decide to expand all the way across the part without any advance notice. Then again, a crack might appear and expand across the part all in one instance. Without sufficient data, we can’t assume the nature of these spar cap cracks. 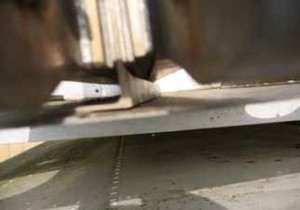 The engineers that designed the Cessna cantilever wings did a phenomenal job as evidenced by the safety history on these legacy planes. As with any man made structure, there are limits and it appears we may be looking at one in the lower spar cap.

Cessna recently issued “mandatory” service bulletin SEL-57-01 and quickly revised it to correct for several serial number omissions, add some illustration, and other miscellaneous changes. Having a fairly intimate knowledge of these spar assemblies, it appears to me, as though the writers of the bulletin were working in a hurry using drawings without actually look at a 210  wing prior to publishing the document. With assistance from CPA , the first revision corrected several problems but not all. SEL-57-01 rev 1 can be read at: www.cessna.org/ atis/1508/sel_57_01r1pdf.

One open issue is the lack of instructions on how and with what the inspection area should be cleaned. Paragraph 2. C. calls for cleaning the area in reference to the applicable parts of the service manual. Unfortunately, there are no instructions in the 200 series service manual on how to clean the inside of a 210 wing to facilitate a detailed inspection. 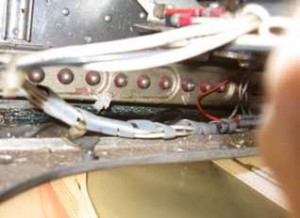 This is what one might see inside a left wing with all the flap system installed. Some serious cleaning is needed and the flashlight/mirror inspection will be difficult at best.

Another issue is that paragraph 2. D. has a note that calls for eddy current inspection if a possible crack exists but can’t be confirmed visually. Once you’ve performed a visual inspection on the front side of the spar cap, you’ll quickly see that access is a major problem. The note refers to service manual section 2A-13-01 which gives very generic application of eddy current testing but nothing specific to this spar cap. This vague reference will leave each inspector on his/her own devices to determine how extensive the eddy current inspection should be and what criteria should be applied.

In its current form, the bulletin calls for visual  inspection of the most inboard section of the lower spar cap on the fore and aft sides. The initial inspection is required by the time the plane has acquired 5000 flight hours. After that, the inspection is repeated at each 100 hours or 12 months, whichever occurs first. 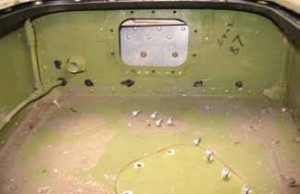 The small amount of the spar that can be seen through the avionics bay after the inspection panel is removed. A flashlight and mirror aren’t going to do you any good here.

If the plane already has more than 5000 hours but less than 10,000 hours, the initial inspection must be performed within twenty-five flight hours. After that, the same 100 hour reoccuring schedule applies.

If the plane has 10,000 hours or more, an external visual inspection must be performed before the next flight. If no cracks are noted externally, then five flight hours is permitted until the first internal inspection of the spar cap is required. Afterward, the same 100 hour timing is required as described before.

Fortunately, the complete inspection only takes about an hour. On planes that do not have the integral wing avionics bay or de-ice boot plumbing, the inspection takes even less time. The only tools needed are a good flashlight and a mirror. For the more complicated wings with the aforementioned avionics bay and de-ice plumbing, a simple videoscope with a flexible extension must be used.

FAA In The Waiting

(I procrastinated finalizing this article as long as I could in hopes to reference the new airworthiness directive. However, I exhausted the patience of the top powers at CPA headquarters (Kris) and had to turn it loose “as is” to make the magazine print deadline.)

We all want these legacy airplanes to last forever, or at least until we’ve gotten our use out of them. It is expected that airplanes ranging from twenty-six to forty-five years old will experience some aging problems. These planes have, will, and should see their share of bulletins along the way.

Cessna is “requiring” the results of each inspection to be reported in a format presented in the bulletin. We don’t yet know if there are any other wings with cracked spar caps, possibly because it’s just not on most mechanic’s inspection “to do” list. Hopefully, Cessna will share the results of the reports from time to time so everyone can get a feel for the urgency.

{The Cardinal wing is almost identical in design to the 210, so don’t be surprised if a similar bulletin is issued for them as well at some point. I’ve not heard any rumors to that effect. I’m just saying there are a lot of similarities.}

Many manufacturers’ “mandatory” bulletins just don’t seem to be all that worrisome; this isn’t one of those. Even if an airworthiness directive isn’t issued right away, getting this inspection performed and reported will be of immense help to the fleet of owners. If you spend just an hour’s labor, you might save yourself a catastrophic wing failure. Pilots has survived parts falling off their plane but losing a wing would be a challenge for even the finest aviator.