Cessna issued revisions to all their legacy (1986 model and older) single engine aircraft service manuals a couple of years ago. These revisions became Section 2A and contain a whole slew of Supplemental Inspection Documents. A few of these SIDs contain “requirements” to use Eddy Current Testing methods to detect cracks in certain primary structural elements.  Cessna also recently published bulletin SEL-57-01-R02 which calls for recurrent Eddy Current inspections of the cantilever wing 210 series lower spar cap. Eddy Current testing isn’t strictly a new technology, but it’s not been a common tool in the light plane circles until now.

My recent training for certification in Eddy Current included a fair amount of history. Olympus is one of the best known manufacturers of Eddy Current test equipment, and most of the following was gleaned from their website (www.olympus-ims.com) as a quick background.
Eddy Current testing is a very simple process, but it took the discoveries and development efforts of several people spanning about a century to arrive at the system as we know it today. In 1831, English scientist, Michael Faraday discovered electromagnetic induction. Simply put, when a conductor passes through a magnetic field, an electric current will flow through the conductor. The operation of electric motors, generators, and alternators are based on this technology.

In 1851, French physicist, Leon Foucault used a copper disc moving in a strong magnetic field to show that magnetic fields are generated in the disc material.  In 1879, English scientist, David Hughes showed the properties of a coil with current flowing through it changed when in contact with different metals.

Finally, Professor Friedrich Forster adapted the unique properties of eddy currents for industrial use while working for the Kaiser Wilhelm Institute in Germany.  He was able to develop instruments that could use eddy currents to measure conductivity in metals, which created the ability to accurately and quickly sort materials.

Developments throughout the 1950s and 1960s established eddy current methods as reliable tools, not only for sorting metals but also for thickness and conductivity measurements, as well as flaw detection. For our purposes today, the ability to detect very small cracks (flaws) in a material, especially aluminum, is of particular interest to us.

For testing aluminum for flaws, we use a probe with a small coil at the tip and an epoxy coating to protect the coil. Alternating current is passed through the coil at specific frequencies depending on the material and application.

The tip of the probe is placed on the test material and slowly moves across it. The current flowing through the probe generates a magnetic field in the test material and is altered somewhat. That change in the field is detected by the probe and displayed to the operator. A flaw in the material will disturb the magnetic field and change the normal display on the eddy current instrument. Test standards with specific flaws designed in are used to calibrate the Eddy Current equipment prior to each use.

Once you get your head around the theory and tooling, it’s a very simple and reliable technology.  Getting repeatable and usable information from the equipment requires a steady hand and good knowledge of the equipment. Proper and consistent use of the chosen probe is paramount in actually detecting and properly identifying cracks.

The Olympus Eddy Current instrument display. The vertical “plume” is a result of passing the probe over a 0.020″ deep crack in the test panel. This is what we don’t want to see during the inspection of the spar cap.

On April 27, 2012, Cessna issued bulletin SE-57-01 calling for visual inspections of the cantilever 210 wing lower spar cap. Effective June 5, 2012, per AD2012-10-04, the FAA requires all cantilever winged 210s have the wing lower spar cap visually inspected upon reaching 5000 hours time in service. It also requires an inspection report be sent to the FAA within ten days of the inspection. The AD refers to revision 1 of SEL-57-01 for details on the procedures for the visual inspection. Neither of these two documents mention Eddy Current inspection. On December 16, 2013, Cessna issued revision 2 of the bulletin which includes different inspection intervals and the use of Eddy Current methods for crack detection.

For those of us flying “N” registered airplanes, only the procedures called for in the FAA AD are required. That means it’s just a one time visual inspection using revision 1 of the Cessna bulletin as reference for the inspection procedure.  Aircraft registered other than under the FAA regulations are subject to their country’s aviation governing bodies. It appears that many countries have, or will, adopt the position that manufacture mandatory service bulletins are compulsory. This may also apply to whether one must comply with the requirements of the Special Inspection Documents.

In the best situation the Eddy Current operator holds the probe in one hand and has direct view of the test article. The test equipment would be set up right next to the article so the operator can coordinate operation of the probe while still seeing the equipment screen to detect indications of a flaw.
On our sample application, access is a bit of a problem. Not that it’s difficult to get to, just that one can’t see the test area at the same time the test is being done.  We employ a method we use when doing fuel tank work, which is to have a small camera connected to a TV or computer monitor.  The camera can be pointed at the test area, and the technician can view it on the monitor.  Borescopes will do nearly the same thing but usually have smaller screens that are more directly attached to the camera. That direct attachment means the screen moves anytime the camera moves. Having a monitor that stays in one place while the picture moves is much less disorienting than a screen that is a moving target.

Performing a simple visual inspection of the spar cap does require a certain level of cleaning in the area. For Eddy Current work, the spar cap must be totally clear of any debris or coatings that could interfere with the probe. It’s critical that the probe have direct contact with the test article at all times. Any paints, primers, or corrosion inhibiting compounds must be totally removed. This could add significant labor time to the test.

The best view of the spar from outside the wing. The subject lower spar cap is out of sight so mirrors or video camera is needed to view them.

After thorough cleaning of the area and getting all the equipment in place, the real fun begins. The technician will  have a camera in one hand, a test probe in the other, a TV screen to see what the probe is doing, and the test equipment screen to display the test results in real time. To get a sample of the hand eye coordination effort, try drawing a simple picture of a star while only viewing your pen on the paper in the reflection of a mirror. It’s a strange challenge at first, but one eventually gets the hang of it. 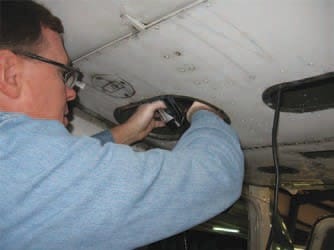 Tight quarters with both hands needed in the wing to hold the camera and the probe.

The bulletin calls for examining around each fastener from wing station 25.25” (the most inboard wing rib at the wing butt) to wing station 45.00 (the first rib outboard of the butt rib) as well as the radius where the aft flange transitions from horizontal to vertical.

To test around the rivets the probe is placed against the side of the rivet tail and proceeds slowly around it one full turn in one direction and then the same in the opposite direction.  The spar cap radius inspection is a little less intimidating because it’s just one long slide down the spar and then back up the opposite direction. At all times the probe must be perpendicular to whatever surface is being tested and the pressure applied by the operator should be as consistent as possible. Don’t forget, this is happening with a camera in one hand, the probe in the other while watching two display screens, one to be sure you’re in the right place at the right angle and the other for indications of a flaw. 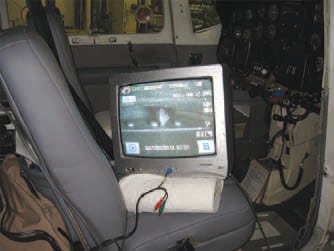 View on the video monitor of the probe tracing around a rivet tail.

The recent SIDs and the 210 wing spar bulletin may be signaling Cessna’s willingness to more readily include these types of NDT, especially for the legacy airframes. If so, more testing vendors will surely be needed. While the Cessna factory has equipment and qualified technicians readily available in house, there are relatively few in the rest of General Aviation world. It will be interesting to see if the FAA follows Cessna’s lead and begins to more frequently require the higher tech and more expensive inspection methods.

The SEL’s mentioned in this article can be found on the CPA website.