My October 2014 article concerned Cessna’s addition of Airworthiness Limitations (AL) to some of their legacy aircraft service manuals. My article couldn’t be completed because we did not have a ruling from FAA legal to tell us whether the new service manual section was truly mandatory in the eyes of the FAA. It took a long time, but the Letter of Interpretation has been received, and it is very interesting.
A copy of my letter of request to the FAA Office of the Chief Counsel and a copy of their letter of interpretation (LOI) is included with this article and should be fairly self explanatory.
The short version of the implication is that a manufacture cannot retroactively create a burden on an aircraft owner. The FAA can do so, in the form of an airworthiness directive, but must follow certain notification and comment period rules in advance. This is old news and we’ve dealt with it several times in regards to “current” inspection programs and manufacturers’ “mandatory” service bulletins. The difference with the AL is that they are FAA approved and specifically called out by the FAA as required in 14 CFR 91.403(c) and 14 CFR 43.16. The regulations referring to AL do not specify any time limit, so the addition of this new AL in a legacy service manual could be viewed as a way around the system.
The aviation community has a lot of precedent on which to stand showing this new AL had no real authority. Unfortunately, not having clear direction would make for a terrible  mess for someone in court someday. Leaving the subject lay around unchallenged would also encourage manufacturers to use this legal side step again. I figured there had to be some way to get clarification in writing from some high authority in the FAA.
My good friend and colleague, Mike Busch, was a great help in guiding me through the process of asking the FAA legal department for a LOI on the matter. Writing such a letter was a totally new thing for me, so Mike’s experience and assistance was invaluable in creating the letter as well as knowing to whom it should be sent.
My contact at FAA legal was Ed “Skip” Alderman. I’ve had a few telephone conversations with Skip during this process and found him very approachable and helpful. When dealing with people in “high places”, I often feel a bit intimidated, but Skip eased all that tension right off the bat. It took a while to get the LOI, but the results were exactly what we’d expected and more.

An unexpected and very welcomed part of the LOI is the next to the last paragraph explaining the communication between the FAA and Cessna. I’ve not seen that Cessna has made any change to the manual yet, but maybe this LOI will assist some of our foreign owners in convincing their regulatory bodies to not view the AL as “mandatory”.
My first foray into FAA legal matters has been very educational. I know these matters don’t always turn out the way we’d like, but in this case the system worked.

Our letter sent to the FAA: 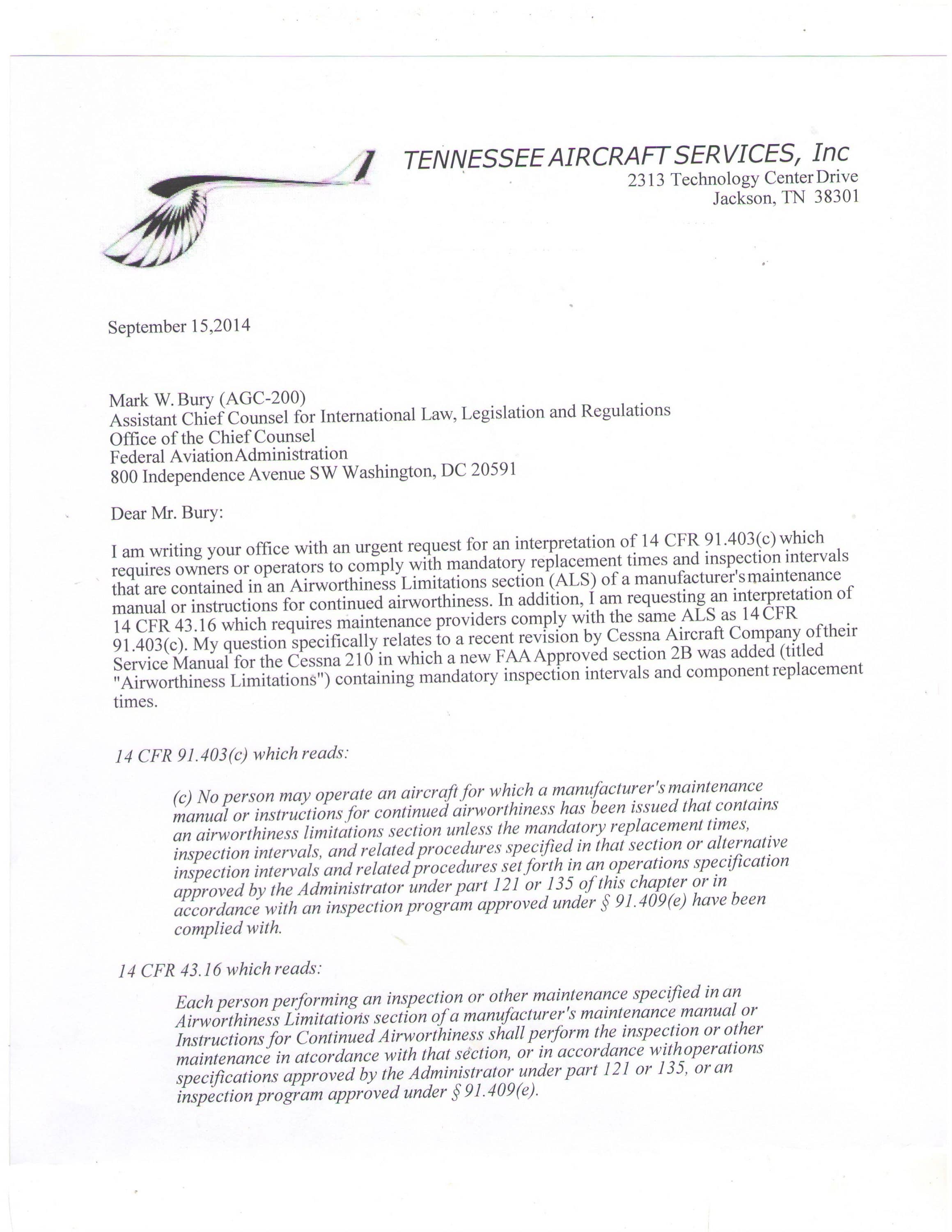 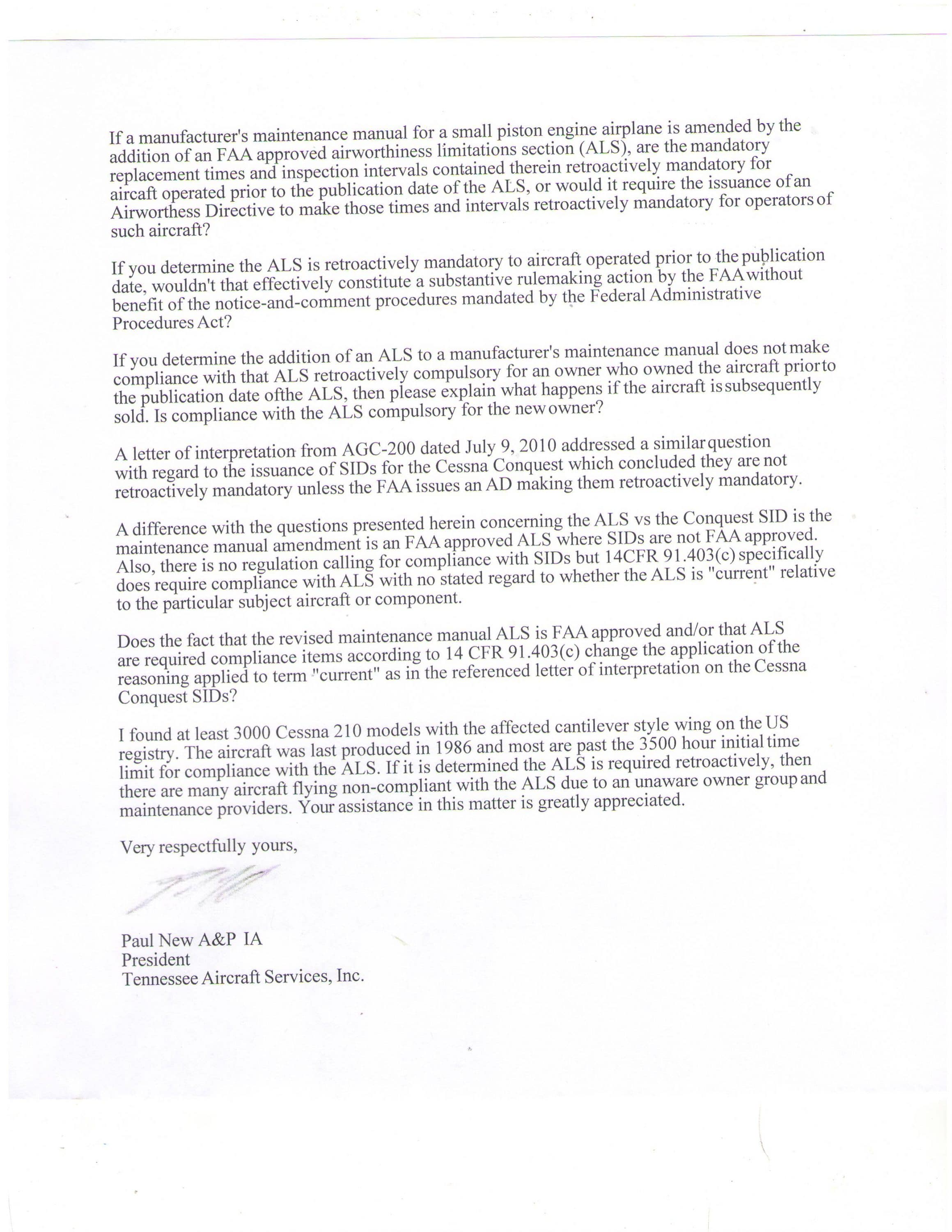 The Response back from the FAA: 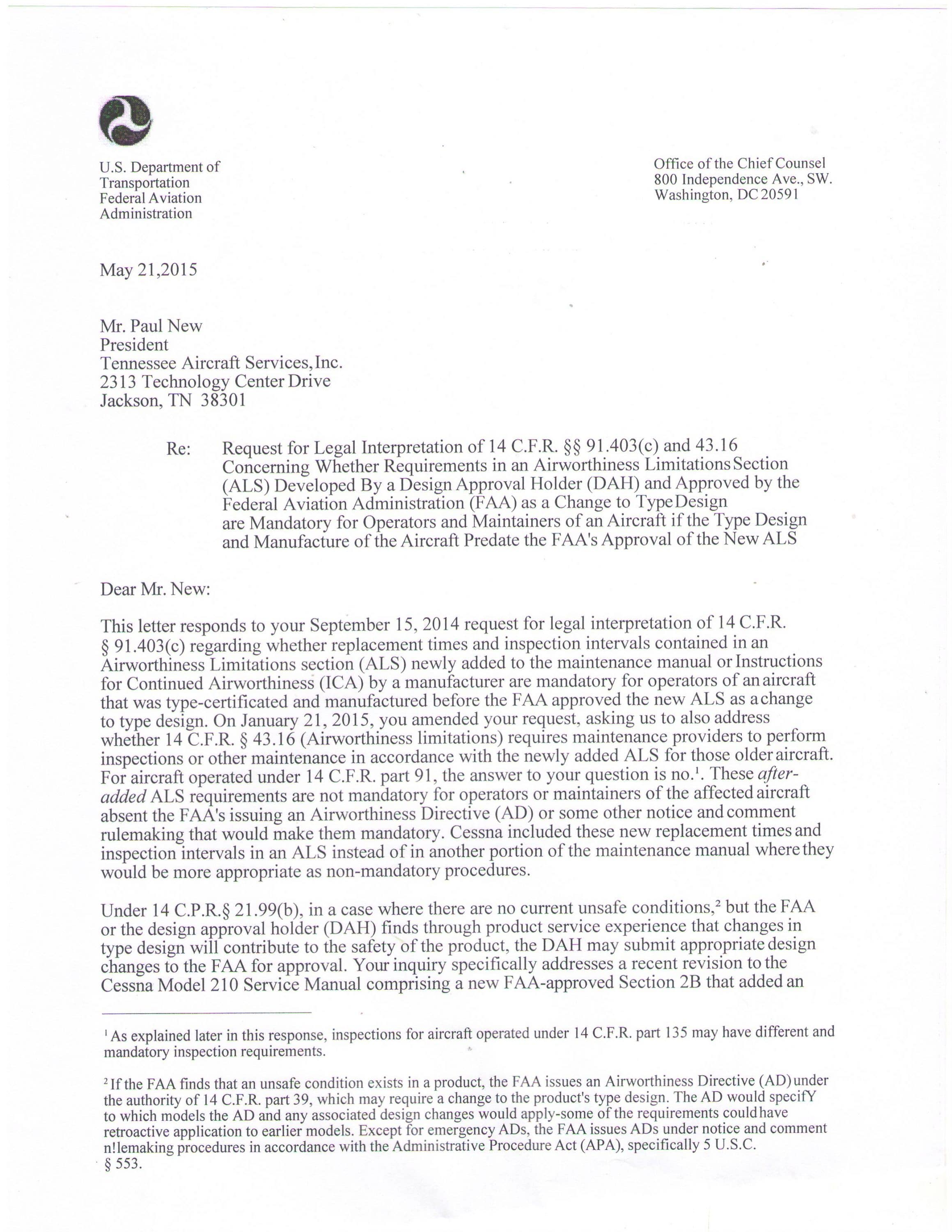 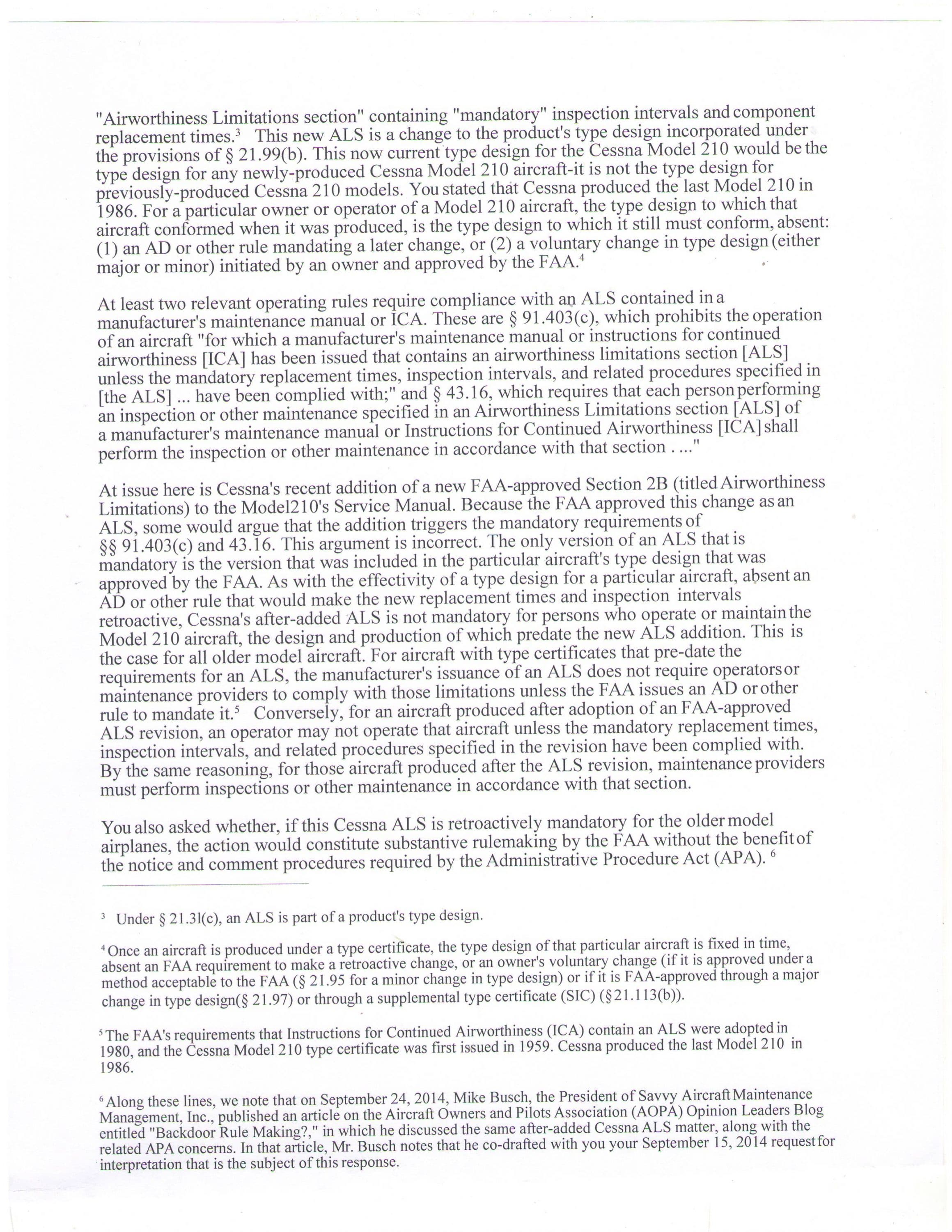 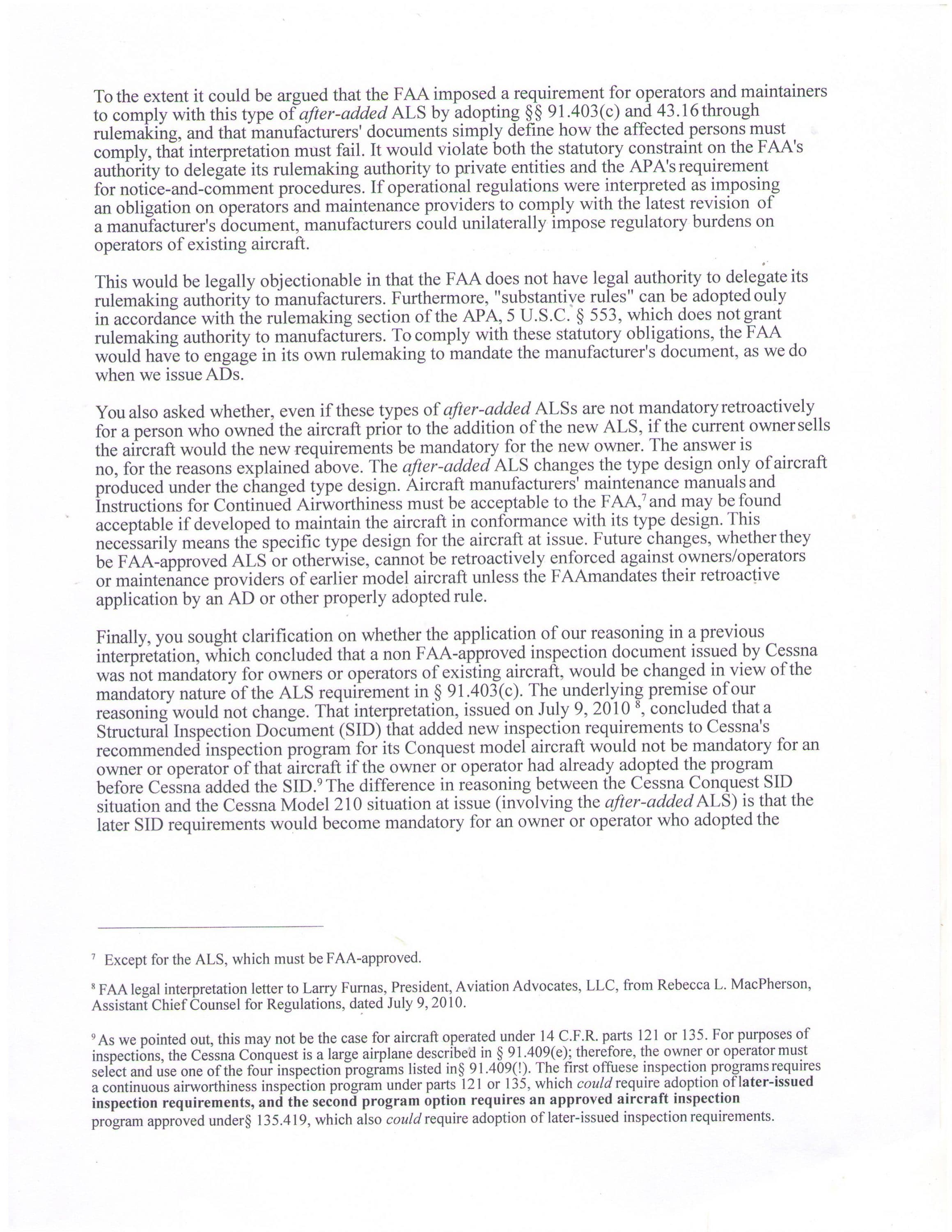 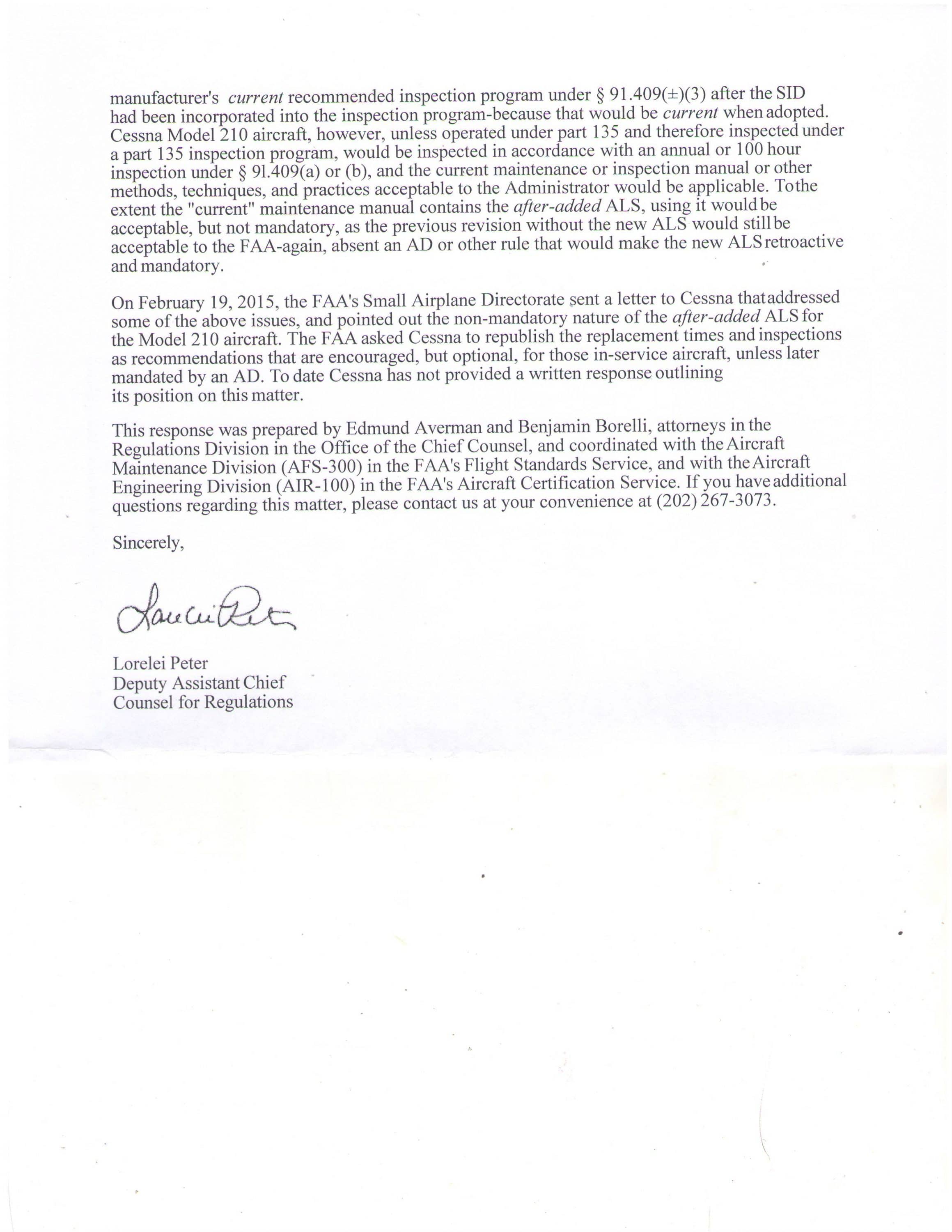