Our minds work in really strange ways. As children we found some sort of safety by pulling the sheets over our head to hide from the monster under the bed. I now find that watching those really scary movies is no problem if I just turn off the sound and use closed captioning. Covering my ears is the equivalent of hiding under the sheets. Lots of us do the same with certain aircraft maintenance items.

We tend to pay attention when the subject of flexible fuel and oil lines in the engine compartment comes up. Oil gushing through the braids of an oil cooler hose almost certainly means an off field landing. Just the thought of raw fuel spraying out of the hose at the flow divider onto the hot exhaust scares the bejeebies out of us. Few argue with recommendations to replace all flexible fuel and oil hoses in the engine compartment at engine overhaul or every eight years or so. However, in addition to those, there are several other important flexible hoses in the plane that you’ve not likely considered.

The original flexible hoses installed in almost all single engine Cessnas into the mid-1980s used rubber as primary material. Rubber has a typical life of about eight years before it begins to deteriorate. The tires on your plane have about the same life span. If you want to see what the inside of those hoses can look like after eight years, just check out the side walls of your really old nose tire. All those “spider cracks” are potential leak lines or separation areas.

Sometimes small areas inside the hose crack in a semicircle and hinge at the attached side creating a flap. This flap can act as a one way check valve allowing fluid to pass normally through the hose in one direct but restrict flow in the other direction.

It may sound odd, but it’s very possible for a hose to allow air into a system while not showing any external signs of a leak. It’s a very rare problem, but it is possible. If the breach in the hose is properly located, the flow of fluid through the hose can create a vacuum, which draws in ambient air. When flow stops and pressure is applied, the breach is forced closed, inhibiting leaks from inside to outside. It’s usually a problem found in fuel systems where flow is fairly rapid.

The typical high wing Cessna has several hoses behind the instrument panel supplying air in and out of the panel mounted gyros. There’s also at least one hose from the fire wall to the vacuum pump on the engine. When the hoses dry rot, the rubber particles breaking loose are already downstream of the main instrument filter. The only hope of keeping them out of the gyros are the very small screens built into each instrument.

It doesn’t take much to cover these screens, which effectively stops airflow through the related instrument. One might think this would show up on the aircraft’s vacuum gauge. Unfortunately, the vacuum gauge only shows pressure differential, not flow. Both instruments’ screens could be totally blocked, reducing air flow to almost nothing, but the vacuum gauge would still show normal pressure because the regulator adjusts accordingly.

Most of the single engine Cessnas came from the factory with rigid aluminum lines connecting the instrument to the firewall feed through. From the firewall to the engine, these are all flexible hoses. These small diameter hoses are very often ignored when all the other “big” hoses in the engine compartment get changed.

Most of the oil pressure gauge hoses connect to the engine pressure port via a restrictor meant to level out any sudden pressure fluctuations. An unintended benefit of that is when the thirty year old rubber hose finally gives up the ghost, the oil loss is slowed somewhat. I tried to calculate the oil quantity lost per minute through a 1/16” diameter orifice at 180 degrees and 60 p.s.i., but it was just more math than I wanted to do. Suffice it to say, as a doctor friend told me “all bleeding eventually stops”. A leak of this magnitude will stop bleeding well before you reach your destination.

When the manifold pressure hose fails, it’ll likely happen slowly over a long period of time. The effects will creep up slowly and may not be noticed until the problem is extreme. A leak in this line will create a small induction leak with minimal impact on actual performance. A normally aspirated engine will suck in a little extra air directly into the induction pipes with minimal change in engine operation. The leaner mixture will show as slightly elevated EGT at full power, but in cruise the pilot will unknowingly increase the mixture enough to compensate without realizing what’s happening. There’s not likely to be any noticeable change in a turbocharged engine except an elevated manifold pressure reading at idle.

Of course, if the manifold hose leak is bad enough, the manifold pressure gauge will display cabin ambient air pressure all the time, no matter the engine power setting. This leak may progress very slowly over many flights. With each flight the pilot unknowingly adjusts power setting procedures until everything is so out of whack that no movement of the throttle invokes a change to the displayed manifold pressure. Depending on the engine and desired power, the actual power could be much higher or lower than planned. This is a recipe for at least two possible outcomes: excessive power settings which might damage the engine or very low power settings which create misleading poor flight performance. Either way, considerable troubleshooting time might be expended in totally unrelated areas before the problem is discovered.

A leak in the fuel pressure hose is noticed fairly quickly. It’s hard to miss fuel stains in the engine compartment or fuel smell in the cabin. The greatest fear is an inflight fire and not much to do about it other than turning off the fuel valve. Keep in mind, the original fuel flow gauges are actually pressure gauges calibrated in flow. A sudden reduction in displayed flow on one of these gauges with no appreciable change in EGTs might be an indication of fuel pumping overboard. 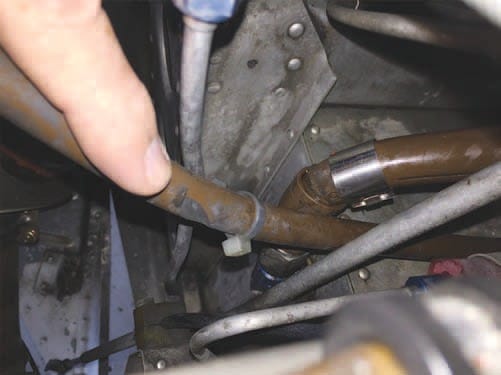 This hose had been laying on the opposite side of the solid aluminum tube. It was then moved to its current position but the damage was done. Using zip ties to a solid aluminum line wasn’t the best option either.

It seems most owners are aware of the multiple hoses that connect the fuel tanks to the cabin fuel lines at the wing roots. There are several of these four inch long hoses, and they are a real pain to replace. The most common initial complaint is fuel smell in the cabin when first opening the door to load up for a trip. Later, there might be fuel stains down the outside of the cabin. Those two symptoms create enough urgency to fix the problem that it doesn’t get to the point of fuel pouring out of the wing during flight.

One flexible fuel line that is seldom seen goes from the fuel selector to the auxiliary electric fuel pump in the belly of some single engine Cessnas. The hose never moves nor do the components it’s attached to, so I don’t fully understand why a solid line wasn’t used. This large diameter line never sees more pressure than just the hydraulic head pressure from the gravity feed tanks. When it leaks, there’ll be green stains on this hose and a faint smell of fuel when the cabin door is opened. I’ve not seen one of these fail catastrophically, but it’s possible. The worst part of this hose failure is the effort required to replace it without getting the threads crossed.

The flexible hoses from the brake master cylinders see a fair amount of pressure. It’s often difficult to tell if they are leaking because of all the hydraulic fluid that gets spilled in the area while servicing the reservoirs. On a side note, if the floor is opened up to get access to replace these hoses, be sure to recover all those extra plastic reservoir filler plugs that have been dropped in the belly over the last thirty years.

Those planes with retractable landing gear have the hoses under the greatest pressures. Like all the other flexible hoses in the plane, these last a long time before failure. However, when they do fail, there can be sudden repercussions. One can imagine how fast the thin hydraulic fluid can vacate the system at 1500 p.s.i. 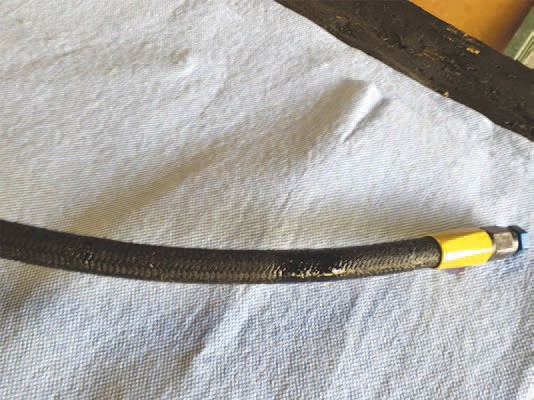 An old rubber hose that was working fine until we flexed it a bit for condition inspection. It is in our pressure test at 1000 p.s.i. and you can see hydraulic fluid oozing out through the outer cover. This leak completely vacated the landing gear reservoir in a couple of hours flight.

During annual inspection we always check the condition of all the flexible hoses. The inspection includes visual as well as putting hands on the hose and flexing it a bit to listen for the crackling sound of rubber breaking. I would stress to anyone that this hands-on checking should never be performed with the system under pressure. Many years ago, a friend experienced high pressure oil penetrating the palm of his hand, passing all the bones and tissue and stopping inside the skin on the top of the hand. The process of cleaning all this fluid out of the body was ugly work and the infection that set in was a real pain. I’m just sayin’; don’t handle flexible hoses while they’re under pressure.

While I’m on the topic of hands-on inspection of hoses, a word about MIF (maintenance induced failure) is in order. The very act of moving an old hose to check it for condition can actually initiate cracks inside the hose. These cracks eventually lead to leaks. It is totally true that the mechanic caused this failure; however, it’s not his fault. By that I mean the mechanic may have done the deed that broke the hose and started the leak, but the fault lies fully in the age of the hose, not the necessary action of inspecting it.

Cessna published service newsletter SNL8554 back in 1985 to announce that their requirement to replace rubber hoses every so many years was changing. With the advent of the teflon hoses, internal rotting is a thing of the past, and Cessna recognized that. For the most part, Cessnas produced after 1979 have synthetic hoses so qualify for replacement on condition.

Regardless of material used, all flexible hoses should be inspected for condition and security at every annual. If any rubber hoses are in your plane, replacement every eight to ten years is strongly recommended. The rubber hoses are deteriorating with only minimally effective inspection methods available to detect failing condition. If you choose to keep these hoses in service past the recommended life span, be sure you’re prepared and watching for the common problems expected.