Uneven tire wear is a long standing irritant in the Cessna high wing owner world. As it is in the automotive world, over inflation causes excessive wear in the middle of the tire while under inflation moves to the outer edges. The solution is as simple as checking tire pressure and maintaining it. The resolution for excessive inboard or outboard tire wear is a good bit more involved. These are only inconvenience problems, but tires that track inboard or outboard and “skip” can cause control problems during ground operations. For the tail dragger crowd, skipping can be a real safety problem.

Camber is the tilt of the tires relative to vertical and is measured in degrees. Negative camber means the top of the tire is closer to the center of the airplane than the bottom of the tire. When your Cessna is topped up with gas and loaded to the hilt, it’s most likely that the gear legs will be spread out more than usual, which puts the tires in a negative camber. When the plane is very light, it sits high on the gear, which angles the axles down causing the tires to be in a positive camber.

Toe-in or toe-out determines where the wheels will track. It’s like a fixed left or right turn specific to each main wheel. “Toe-in” means the front of the wheel is pointed toward the center of the plane and “toe-out” rolls the wheel away from the centerline. When excessive toe-in or out is set on a car, the tires just wear and the driver unwittingly just holds the steering wheel in a position that equalizes the angle on both front wheels. On a Cessna with very flexible spring steel gear, there is much more freedom of movement.

The owner of the 1966 210 we performed the alignment on had noticed the tires tracking off center just in the distance required to move his plane in or out of the T hangar. In a full taxi mode this meant the problem wheel would track off center as far as the gear leg would flex and then jump back. It sometimes looked like the gear was skipping or jumping in and out. This is a mere nuisance on tricycle gear planes.

However, on the taildraggers it can be very difficult to control, especially on landing. One wheel wants to go straight, and the other goes left or right at one of the most critical moments in the transition from flight to ground operation. This divergence will be far less noticeable when landing on sod than on dry pavement.

The planes with flat spring steel main gear legs are the most susceptible to changes in the direction of the wheels. Whether fixed gear or retractable, the main gear have some variation with the angle the legs make with the centerline of the cabin. Any change in the main gear leg mounting would be a good time for rechecking the alignment of the wheels.

Back in my teenage years as a gearhead with a British Leland MGB roadster, I learned about wheel alignment using pretty crude homemade tooling. My initial proof of success was getting the car to track straight down the road. Long term success was confirmed after a few thousand miles driving and confirming even tire wear. Not the most efficient method but it served its purpose at the time. I wouldn’t dare consider attempting alignment on a modern automobile. There are more details in wheel alignment than I can imagine. Not the least of which is that new cars must have all four wheels aligned. Just doing the two front on the MGB was bad enough.

The nice part about wheel alignment on high wing Cessnas is that it’s not much different than what I did on the MGB. No fancy or expensive equipment is required or even suggested.  All one needs is four sheets of metal, plenty of grease, a long straight board, a good quality carpenter square, a scale, and a protractor level. The complete instructions are contained in just one paragraph and one figure in the service manual. Needed changes in alignment are achieved by installation of different wedge shaped shims between the axle and the gear leg. 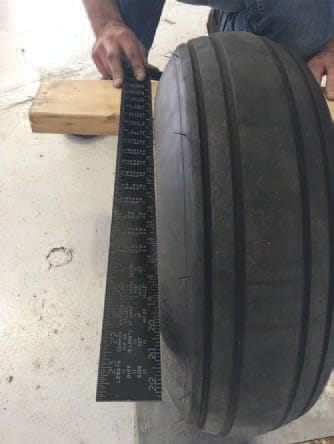 The precision aviation grade carpenter’s square set for toe in measurements on the wheel.

The longer version of the procedure starts with the question of the operator’s normal operating weight. This would be the airplane’s normal take-off weight, not the pilot’s weight, just so we’re all on the same page. The toe-in and camber can be set per the chart with the plane empty, which should result in zero toe-in and zero camber when loaded to full gross weight. Few of us fly routinely at gross weight, so Cessna allows for customizing the alignment. Once the target weight is determined and the plane loaded to that target, the process can begin. 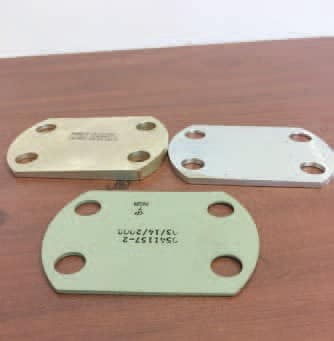 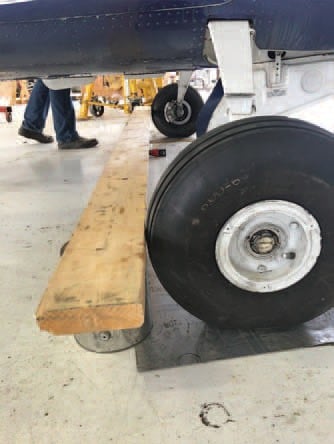 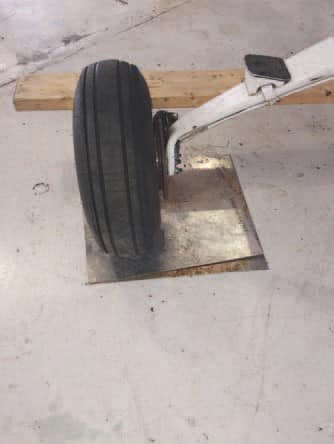 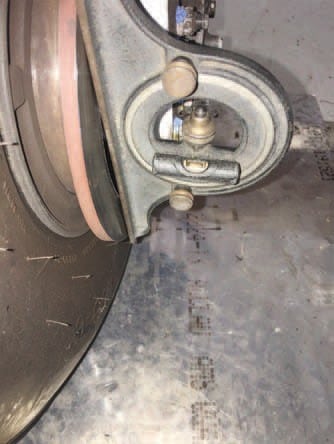 Camber measurement with the protractor level against the brake disc.

The plane is lifted enough to place grease plates under each main tire. This allows the gear to spread out without the friction of the tire against the floor. A long straight edge is set at the front of the tires as the reference in measuring toe-in using the square and scale. A protractor level is set on the brake disc to measure camber. If all checks within the customized specifications for the chosen weight, then all is done. If not, then it’s time to get out the wrenches. 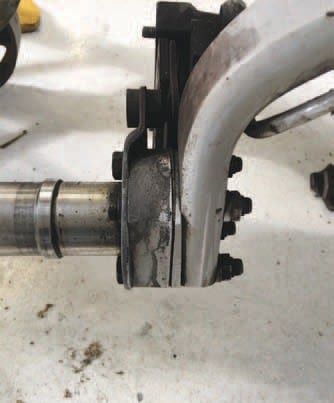 An inspection of the mounting of the axles is made to determine if any shims are currently installed. In a perfect situation there’ll be no existing shims, and calculations for the needed shims is a matter of selecting from a chart in the Service Manual figure. (See following pages) I rarely experience the perfect situation, so I often begin by removing all existing shims and start calculations from that known baseline.  Using the charts in the figure, it’s usually pretty easy to get the desired alignment on the first try. The trick is having the needed shims on hand.

Performing a main gear wheel alignment isn’t something we do very often. Wheel alignment checks are not part of any required or recommended inspection interval. It’s rare for an owner to request or even suggest an issue with alignment. Even with a little asymmetric tire wear, the effort to straighten the gear may exceed the tire consumption benefits. But, when the gear begins to skip around on landing and high speed taxi, everyone’s view suddenly changes. If one is curious, just get out the aircraft carpentry tools and see if the wheels are straight. As long as you’re just taking measurements, there’s no A&P involvement required until you approach the plane with airplane tools. Whether or not adjustments are needed, it’s a simple process to perform and interesting to know if everything’s all lined up. 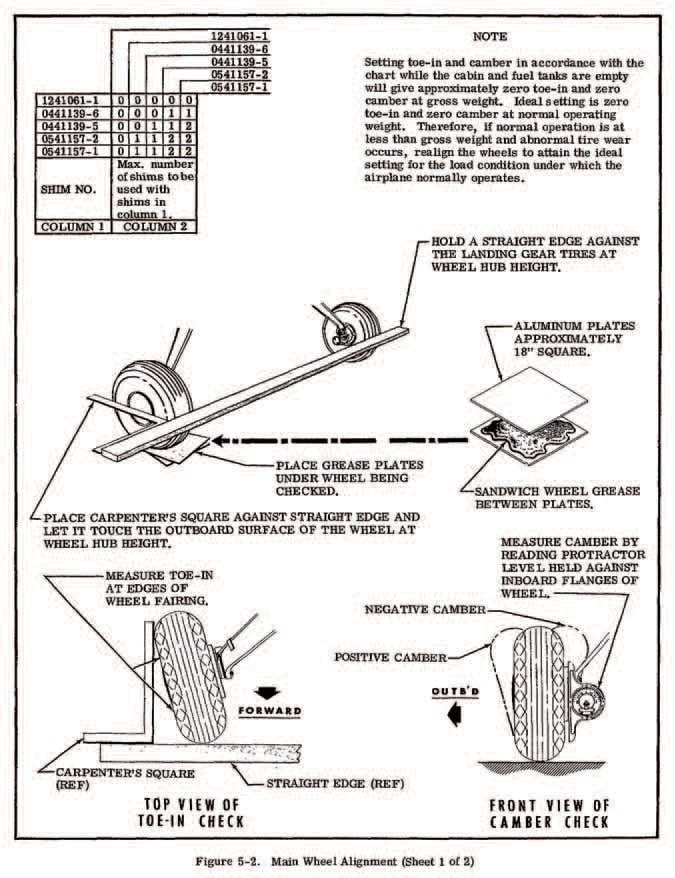 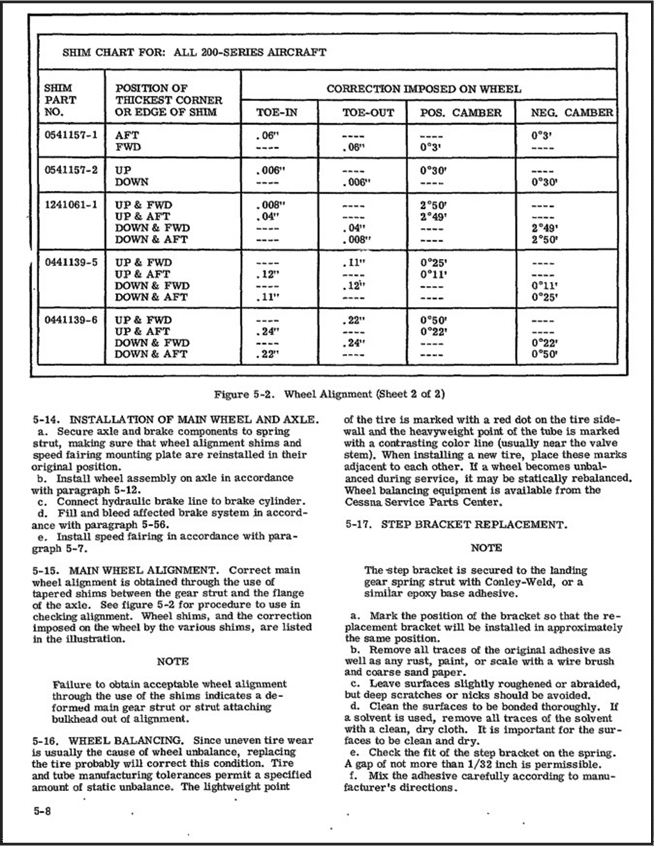