Situational awareness generally means one is fully cognizant of all the events involved with the task at hand. Most of us tend to limit our in-flight situational awareness training to basic aircraft operations and navigation. The idea of aircraft condition awareness is usually only reactionary, meaning we don’t deal with it until something is obviously broken. My view is supported by the fact that flight instructors spend a lot of time teaching what one should do if something stops working: engine out, pneumatic pump failure, navigational system errors and so on. When was the last time you received training on how to be aware of your engine’s operation so you could avoid that simulated failure? Training in a more proactive approach to aircraft condition seems at least as important as the current passive approach.

A recent CPA forum thread reminded me of a conversation I had with a long term customer after he finally installed an engine monitor. He’d been flying his 210 for years using just the original analog gauges and was comfortable with the information. After installation of a full featured digital engine monitor, he was shocked at how his normal operating procedures were abusing his engine. There was a period of information overload panic while he came to terms with it.

In an effort to calm him down, I explained that nothing at all changed with the engine. Just because he could now see what was happening didn’t mean some immediate failure of the engine should be expected. Needless to say, this pilot/owner was glued to his engine monitor to the extreme for at least the next 100 hours of flight. There were countless phone calls and emails describing every slight divergence from normal indications. Engine situational awareness to be sure but possibly at the loss of flight situational awareness. Not knowing due to lack of available data is one thing, but not knowing due to lack of awareness is another.

A few months ago a co-owner of a G1000 equipped 182T experienced a catastrophic engine failure ending with an off airport landing. He walked away unharmed, but the aircraft was a total loss. The down side is just a little attention given to the massive amounts of available data from the Garmin G1000 would have prevented all harm. 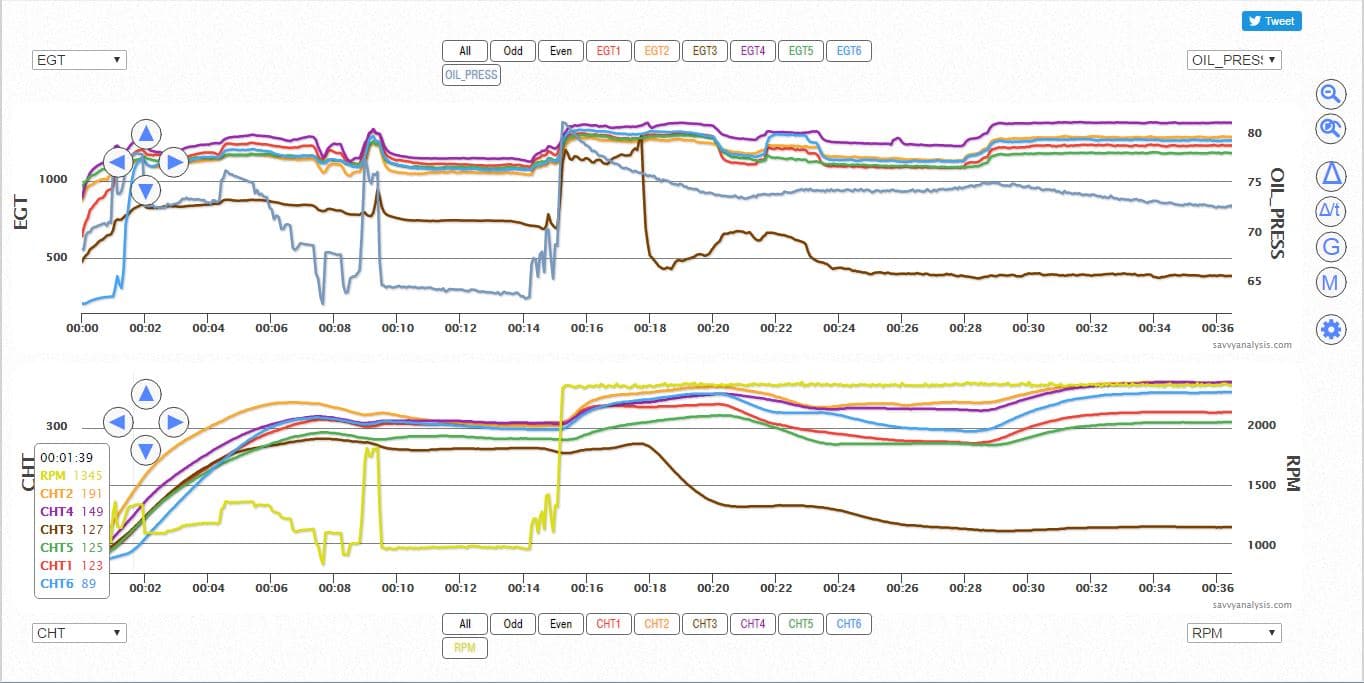 A screen shot of the engine data at the beginning of the flight. You can see #3 wasn’t participating almost from the start.

During the post accident investigation, I reviewed the engine data and found one of the cylinders dropped off line during the takeoff roll. It was indicated by erratic, then cold EGT on that cylinder. The CHT supported that the EGT reading was real. A totally dead cylinder on a six cylinder engine should get most anyone’s attention but not this time.

As the three hour cross country flight continued, the pilot did note minimal EGT on the one cylinder. Unfortunately, it was ignored as just a failed probe based on a similar display in the past. No attempt was made to view other corroborating data. Had he made that small effort, some sort of alert might have been triggered to save the day.

Instead, the valve rocker arm shaft boss that failed at takeoff punched a large hole in the rocker arm cover. Both of the cylinder push rod tubes migrated out of position. Engine oil then had a clear path to slowly exit the engine. Other problems occurred as well, but the newly created passage for oil loss would be the engine’s final demise.

The pilot added oil prior to departure, so he had a nearly full sump at take off. There aren’t any indicators to show oil volume in the engine while it’s running. The only direct oil related displays are oil temperature and oil pressure. At two hours fifty-seven minutes into the flight, the oil pump began to suck a little air. At the three hour mark, the oil pressure dropped to the warning point, finally getting the pilot’s attention. Five minutes later the number two connecting rod failed with a loud bang and significant power loss, which then commanded the pilot’s every thought. Two minutes after that, the windmilling prop was harvesting soybeans. 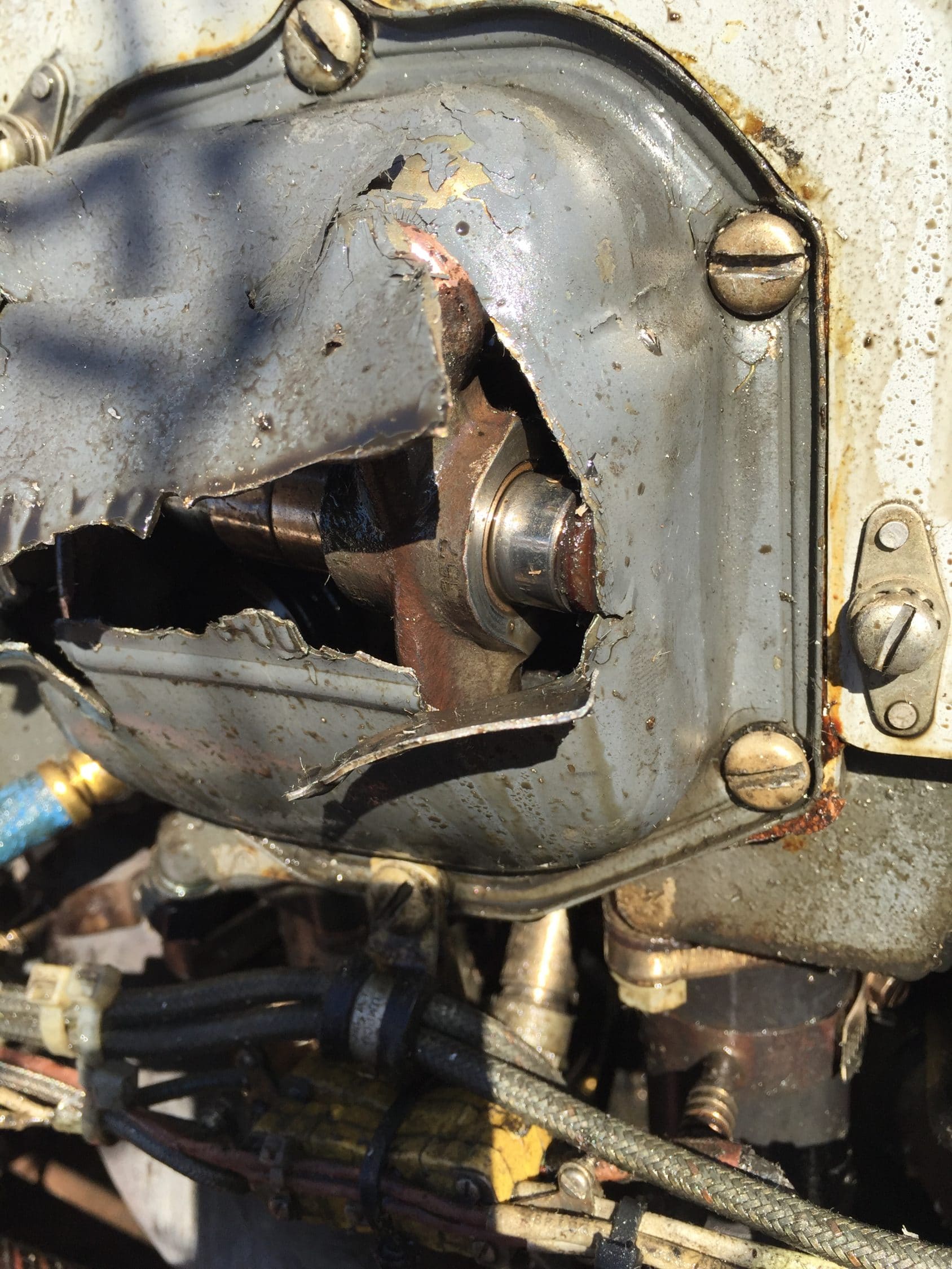 The #3 cylinder valve cover as we found it at the accident site. 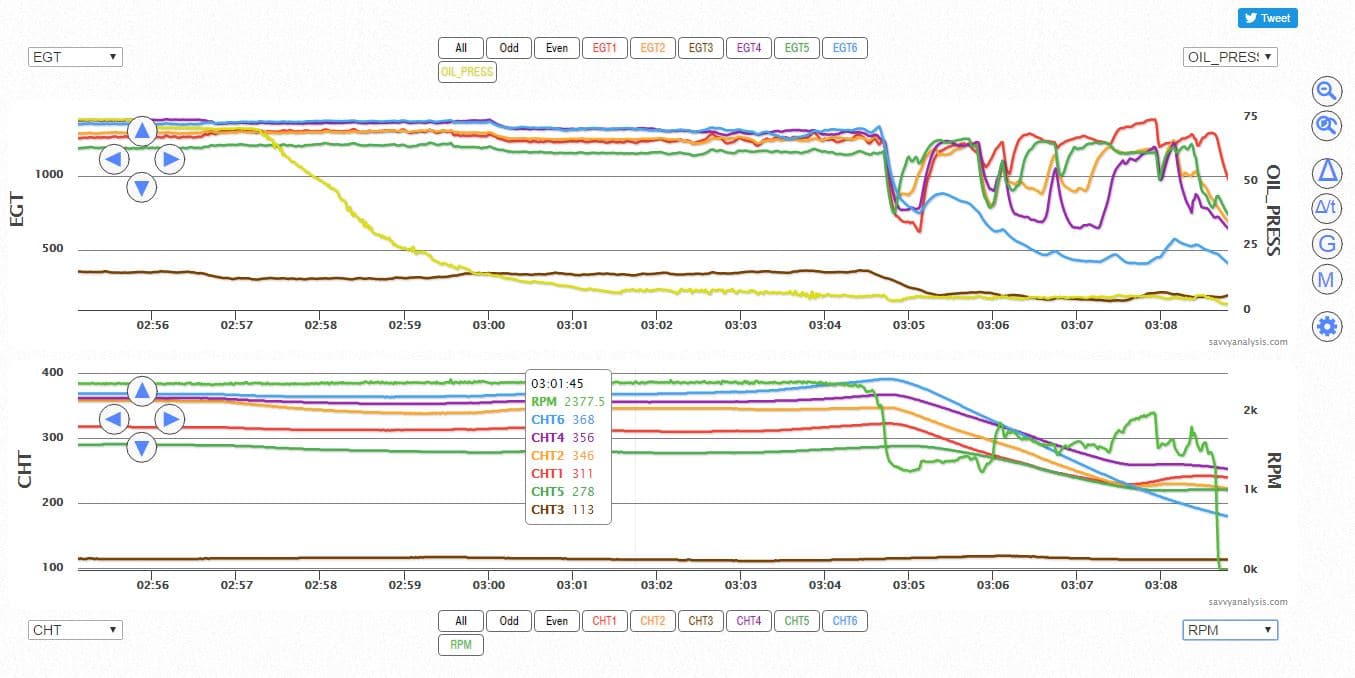 This screen shot shows the end of the flight. Oil pressure drops, then a few minutes later the big bang when the #2 connecting rod failed, and the RPM goes low. 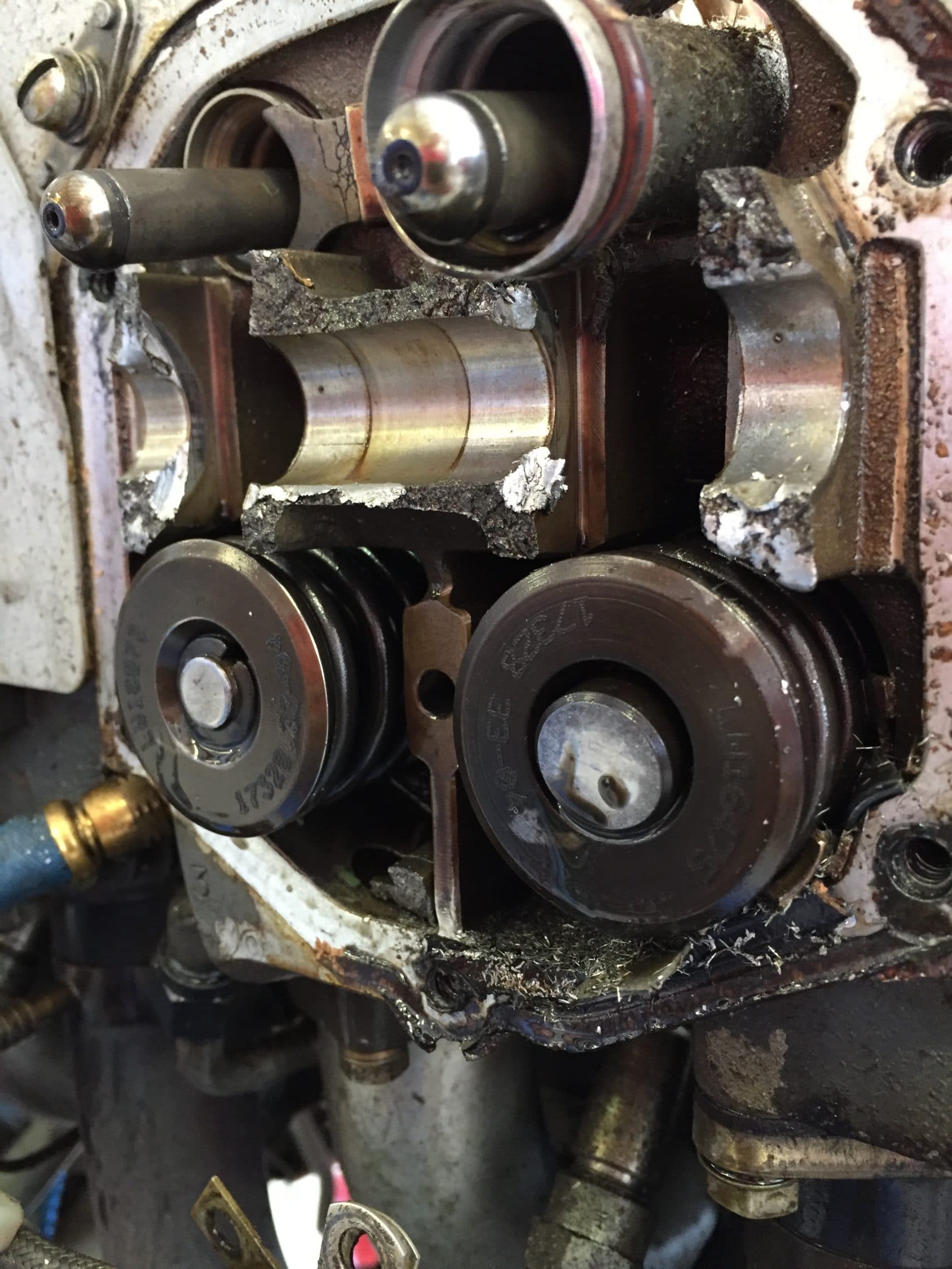 The cover removed from #3 showing the rocker shaft bosses that failed. The parts missing from the photo were all laying in the cover.

They key to best aircraft condition monitoring is understanding what is normal and recognizing when something indicates a departure from that norm. Recognizing the early indication of a problem often allows preventive measures. At the least, early detection provides extra time to weigh one’s options and make informed decisions in hopes of the best outcome.

A beginning step in analyzing an indication anomaly is verifying its validity. One should question if the data displayed is reasonable and if there is some way to confirm by using other indications.

A simple example is an erratic cylinder head temperature (CHT) reading. A CHT that moves from a normal 360 degrees F up to 480 degrees F and back down again in less than a few seconds defies the thermodynamic possibilities of the aluminum cylinder heads. This might be ignored without supporting data. If the exhaust gas temperature (EGT) on the same cylinder shows correlating increase or decrease, then more investigation and possible action is warranted.

Most engine indication anomalies don’t require immediate action. Assuming the engine is still running and the pilot has good control of the airplane, there should be time to evaluate the display and make rational decisions. This does require engine systems indications be included in the pilot’s normal instrument panel scan. Some monitor systems do have several layers or pages that must be viewed to see everything. Keeping the page in view with the most critical information will help with quick problem recognition.

It’s beyond the scope of this short article to present all possibilities for in-flight aircraft systems situational awareness. A little research through the CPA magazines and forums will quickly present plenty of resources. Many webinars by my good friend and colleague Mike Busch are available on the subject of engine monitor use, and I highly recommend them as well.

One might think the local flight instructor or mechanic would be a good source for information, but don’t get your hopes up. Engine monitor usage in interpretation hasn’t made it to the training mainstream, and there’s no indication that it will anytime soon.

Part of the issue is that training aircraft with fully capable engine data display have only recently began showing up in flight school fleets. For the most part, individual aircraft owners have the better equipment, but the hired instructors don’t always have the extensive knowledge needed to make good use of all the different systems.

It’s a similar situation for mechanics. There are many different system possibilities with unique capabilities and hardware requirements. The perception is that the educational investment far outweighs any expected return. There are also those that just don’t want to deal with the new technology.

We’ve all experienced training in what one should do if the engine quits. There’s very little training to recognize indications of imminent failure and ways to proactively mitigate for best results. Prevention is a cornerstone in flight training and maintenance, as it should be. The traditional prevention training focuses on thorough preflight inspection to find problems before a flight. Unfortunately, there are many failures waiting to happen that can’t be found during pre-flight or even during the engine run up prior to takeoff. Sometimes evidence of looming problems don’t present themselves until the plane is airborne.

All this means the current burden of education is on the pilot/owner. Full situational awareness is more than knowing where the next waypoint is, how long the destination runway is, when to begin the descent, or what approach clearance to expect. It must include monitoring all available information to maintain awareness of what might happen with the engine, not just what has happened. The rewards for doing so are tremendous.