Every once in awhile an old adversary pops up its ugly head just to make sure I’m paying attention to the details.  I don’t have a lot of taildragger time and fortunately have never ground looped a plane. However, planes have performed ground loops while sitting still in my shop.  This may sound like a tail dragger landing problem, but I’m thinking of electrons. Sorry for the misleading intro, but I needed to get your attention about a nagging issue that will plague electrical troubleshooting on your legacy Cessna and its mechanic someday.

The 172RG undercarriage retraction/extension system is one of the most reliable and simple in the industry for small planes. The typical failure modes are obvious and logical, which also makes them easy to diagnose. However, When odd symptoms arise, the simplicity of the system can actually be a hindrance to finding the solution.

The reported symptoms are that intermittently during gear retraction, the ammeter pegs out to the negative side, trips the pump motor circuit breaker, producing a slight burning electrical smell in the cockpit, and leaves the main gear hanging in trail. This is consistent with a failing battery that doesn’t support the electrical needs as it should, leaving the alternator to do most of the work. The lowered voltage causes the gear motor to use much more current than designed for.

This system operates perfectly when the aircraft is on jacks. All voltages and current flows are within norms. It works well when powered externally with a 28 volt power source capable of all the current the airplane could want.  Everything also works as expected when only using the aircraft’s battery, albeit a little slower. The motor itself isn’t very old, and they have an excellent service history so not an obvious suspect.

Some of the most frustrating troubleshooting problems are those that are intermittent or that only occur in flight under certain circumstances. The information about these problems provided by the pilot also often complicates the process due to lack of understanding of the system or less than optimum communication about the symptoms. At this point, some out of the box thinking is required.

Let’s connect three equal size lamps in a single row (series) from the positive to the negative posts of the same twelve volt battery.  Each lamp illuminates as current flows through the closed circuit.  The difference in potential across the battery terminals is twelve volts.  If the voltmeter is connected across either of the three lamps, the voltage reading is four volts. Connect the voltmeter across two lamps and the difference in potential reads eight volts.  Any component added to this series circuit presents some level of resistance which results in a difference of potential across that component. If sensitive enough instrumentation is used, even the very small resistance presented by the wire connecting the lamps together could be detected.

The current meter in all the piston Cessna aircraft, as with every small plane I’ve ever worked on, is actually a very sensitive voltmeter reading the small difference of potential from one end of a shunt resistor to the other. It’s usually such a small difference that measurements are taken in millivolts.

Every material that electrons pass through in a small plane resist the movement of those electrons. The shunt, that’s just a metal bar about an inch long, possesses enough resistance to see the voltage drop on a millivoltmeter.  A stranded wire sending electrical power to the pitot heat element has resistance, as well as every other wire providing power to systems in the plane. It’s not a lot of loss, and engineers design around the resulting power loss.

The interesting caveat is that all these electrical systems are closed, meaning all the electrons make a full round trip.  They leave the battery travel to the load (lights, flap motor, avionics and so on) then return to the battery.  It may seem odd, but electrons flow from the negative battery terminal through the load and back to the positive terminal.  When troubleshooting, and for the purposes of this article, we’ll use the more conventional term which is Current flow. Current flow travels from the positive terminal through the load then back to the negative terminal.  It’s a detail, but my mind follows it better this way.

The focus today is the return path from the load back to the battery. A wire takes current to the NAV light, way out on the wing tip, so something must bring it back. Another wire would work, but it just so happens that most of our airplanes are made with aluminum. It’s not the best conductor but does a sufficient job when all is working well and saves a lot of extra wiring when used. The aluminum airframe is also conveniently available everywhere electrical components are mounted.

Using the airframe as the common ground current return path works great when the aluminum is new and the effects of age haven’t set in. The large surface area of the skins and structure provide a very good return path since electrons flow along the surface of the conductor. The connection from one skin to another becomes an issue as oxidation and corrosion develops.  Every connection creates a point of higher resistance to electron flow than what was accounted for in the system’s design. As the bond between skins continues to deteriorate, the stresses and vibrations caused by normal flight exacerbate the problem.

The e.g. in item two above is the version we’re interested in today. The common use of the term is related to low voltage signals such as headphone audio and/or radio signals through antenna coax. As the effects of aging continue on our airframes, the problem can begin to affect even higher current systems.

The “two earthed points” in our airplanes would be where the component (load) is grounded and where the battery is grounded. It gets more complicated when the alternator is included in the system with its current supply and return through the connections to the engine.

Back to our initial example with the three lamps in series. We’ll use a simple NAV light circuit, leaving out the circuit breaker and switch for the sake of simplicity. What remains is the aircraft battery positive terminal, wire from the battery to the NAV light, the NAV light itself and the airframe return path to the battery negative terminal.  This setup has the same basic components as the three lamp example. The first lamp connected to the positive battery terminal represents the voltage drop across the resistance of the wire from the battery to the NAV light.  The second lamp represents the load of the NAV light.  Last, but certainly not least, the third lamp represents the problematic resistance of using the old airframe as the current return path.

If the three loads remain constant, there’s not much trouble. The wire from the battery to the NAV light and the airframe return both should have very low resistance. That means almost all the voltage drop is across the NAV lamp, exactly where it should be.  The airframe becomes a larger resistance as the plane ages, which increases the difference of potential through the airframe and lowers the voltage available across the nav light. Eventually the NAV light gets so dim that it’s a noticeable problem.

Electric motors add another detail to confound troubleshooters in that they present lower resistance to current flow as they slow down when applied voltage is lowered. This excessive current draw heats the motor and the circuit breaker very rapidly.  The question is why would the voltage applied to the motor be reduced? Since I spent a few hundred words explaining ground loops one could safely presume the answer is somehow related to that. 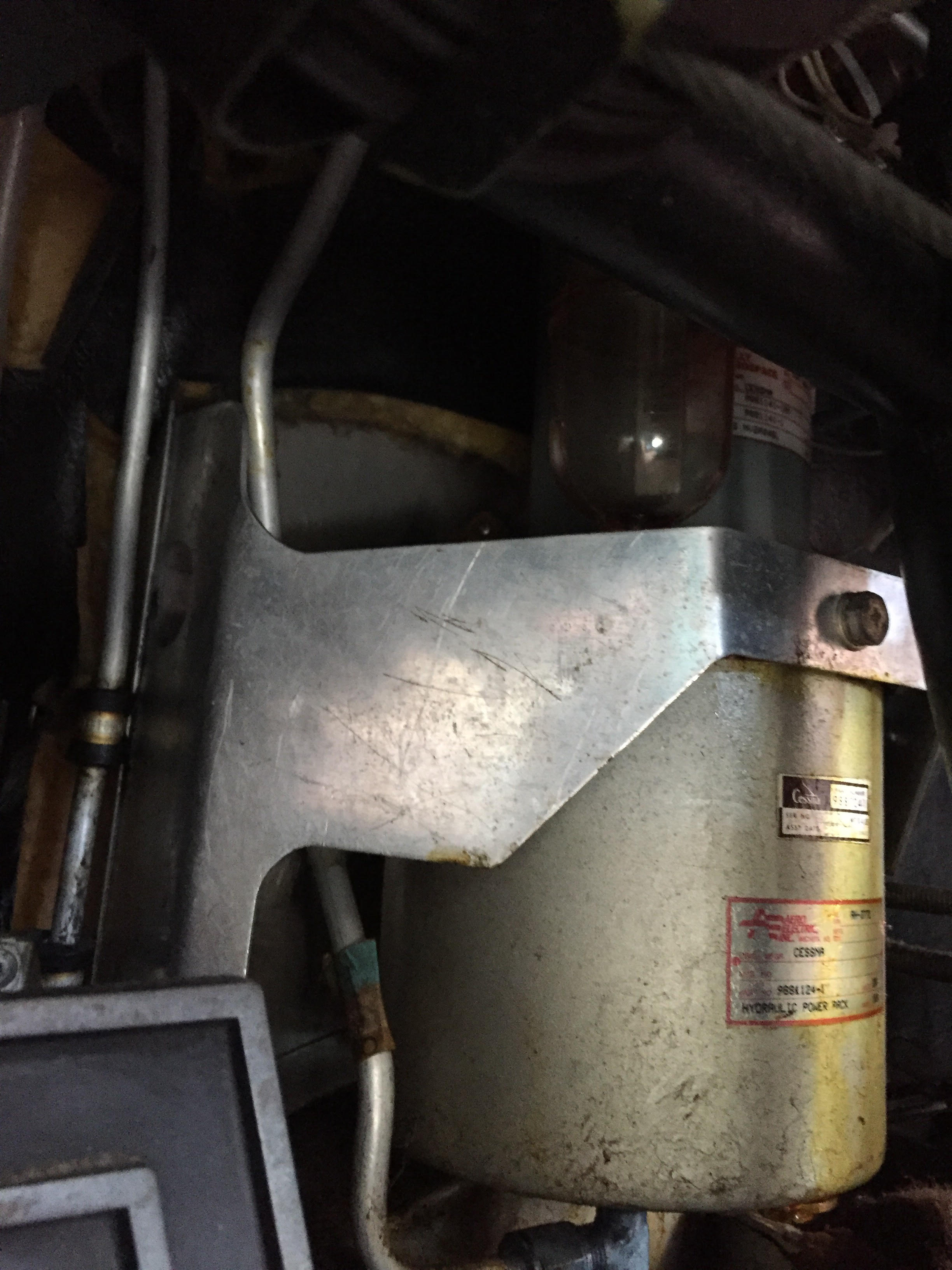 The hydraulic pump is bolted to the structure in the center console just forward of the fuel selector and trim wheels. Note the electric motor barely visible mounted on top of the pump.

The components and connections from the electrical power buss through the circuit breaker and the gear motor relay to the motor itself are easy to test and confirm. What isn’t as obvious is the condition of the ground (airframe) return path. It consists of the case of the motor mounted to the hydraulic pump which is bolted to the aluminum structure in the center console. That’s a lot of surfaces connecting to each other, presenting potential extra resistance to current flow.

One solution is to remove the motor and pump for a thorough cleaning and treatment of all the mating surfaces. This would bring the electrical bond to a good stable level and solve the problem for a fairly long time. Another more straightforward approach is to install a dedicated wire from the motor directly to a ground point close to the power source.

It’s a very simple thing to install a ground wire of sufficient size to a motor. A flight check with multiple gear cycles confirms that the system is operating perfectly normal as designed.  Bypassing the ground loop is a very effective and long term solution. It’s so good that most current production airplanes are designed with this in mind as well.

The restart Cessnas, 1997 year model and newer, are designed to avoid ground loops.  Most systems use dedicated ground wires for return current instead of the airframe. Part of the reason is that all the airframe structural parts are primed prior to assembly. While this almost eliminates concerns about corrosion, it also inhibits current flow from one part to another. The dedicated ground returns are far better and a small price to pay for stable current flow.

This is just another issue to deal with should you be flying around in an antique airplane like most of us.  The older these planes get, the more thoughtful should be the approach to troubleshooting.  While in the middle of the effort, it may feel as though there’s no solution short of a replacement airplane.  A little tenacity and creative thinking will eventually present the answer.  Once it’s all done, most are amazed at how simple the final solution is.