Every solution has its problems. The various devices used to trim an airplane for stable flight is a good example. I suppose elevator trim was one of the first secondary flight control systems available. It’s also one of the most needed, so necessity again proves to be the mother of invention. As engines got more powerful, a need to assist with rudder input due to the higher torque became an issue as well. It is interesting how some designers decided to address it.

Possibly the most common method for flight control trim is to add a small moveable tab to the control surface itself. The tab is adjusted by the pilot in flight to move the primary control for minimal input force applied to the control yoke. The tab deflects to move the primary surface which then moves the airplane. Cessna uses this arrangement on almost all their designs.

The older 182 and 180/185 series used a system of chains and worm screws to move the leading edge of the horizontal stabilizer up or down, thus changing the angle of incidence. This works very well but is heavy and complicated. Access for servicing all the mechanisms can be a challenge as well.

The Mooney aircraft have possibly one of the most interesting pitch trim arrangements. The entire empennage is mounted on a hinge and can be adjusted for pitch control. It’s somewhat unique in the small plane world but seems to work well. I only include a Brand M reference to show some engineer’s out of the box thinking.

None of the single engine Cessnas were designed with pilot flight controllable aileron trim. The strutted wing planes have no aileron trim at all. The cantilever 177 and 210 series have ground adjustable tabs on each aileron. Most of the twin models have flight adjustable trim tabs on the left aileron.

I have seen many strutted wing Cessnas with a fixed trim tab attached to one of the ailerons. It can be very effective for sure. However, to my knowledge, there is no approval for this major alteration. There is a company that offers an STC to install an electric trim tab for these planes. It works well, but having the plane properly rigged is even better.

The most common rudder trim design is a fixed tab on the trailing edge of the rudder. It can be bent slightly as needed to get the desired result. One limitation is that the fixed position will only result in a centered turn coordinator ball in one specific flight configuration. Any change to aircraft weight, center of gravity, speed, power setting or pitch and the ball will move from its appointed center position. The most common solution is to adjust the tab for centered ball in typical cruise flight. 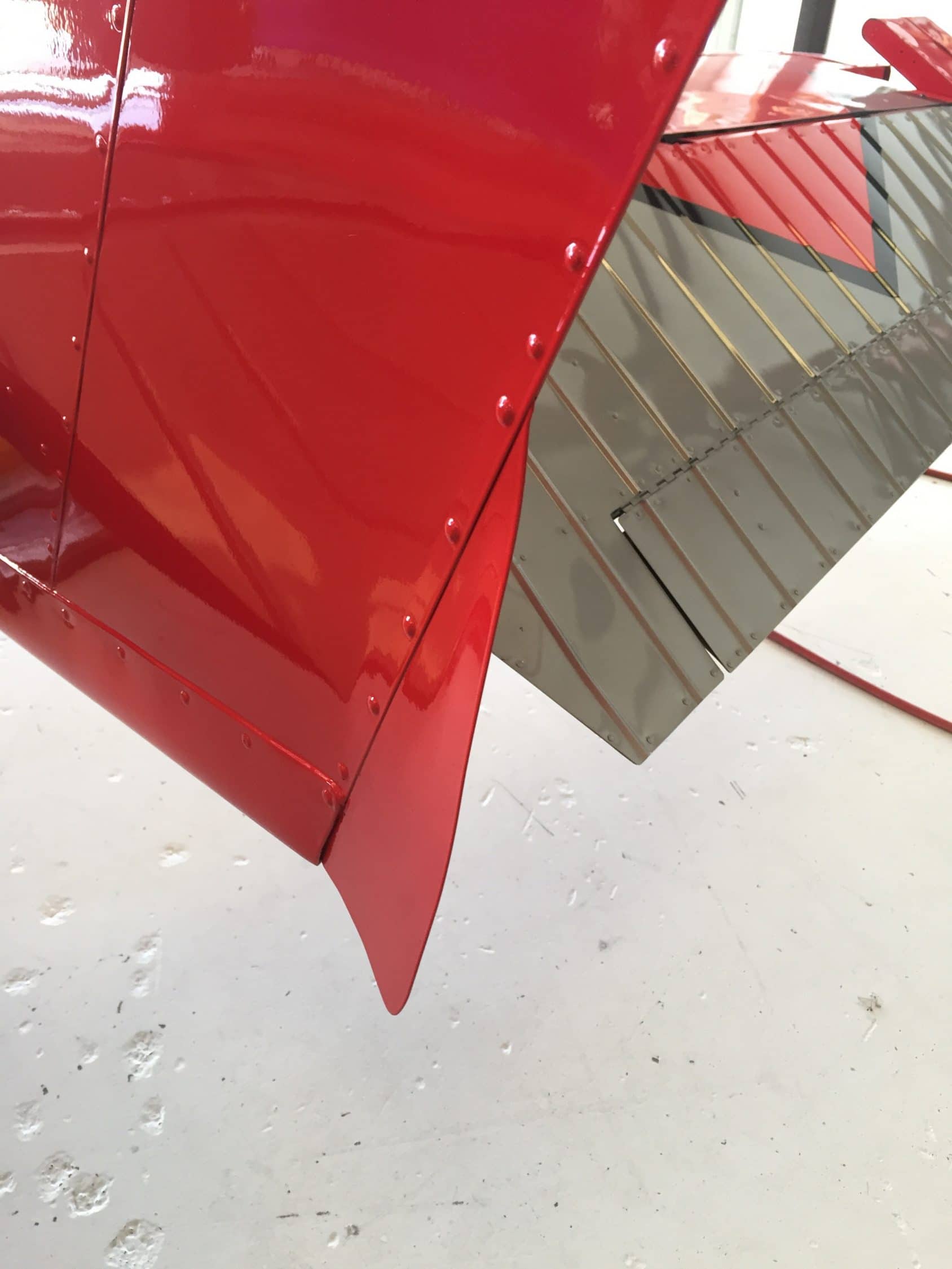 A fixed rudder trim tab on a Cessna 172. It is bent fairly hard to the left which will move the rudder to the right.

Flight adjustable rudder tabs may be one of the better systems but only designed into the Cessna twin series and larger. I don’t have any special knowledge for the engineering reasoning for this but can imagine that build costs and complications of installing a hinged tab on such small rudders may play a role.

The typical single engine adjustable rudder trim is actually just a spring, more technically, a bungee. The bungee is connected between a point on the nose gear steering and the rudder pedal torque tubes. Via chains and sprockets, the pilot can adjust how much pressure and in which direction a load is applied. The end result is exactly the same as if the pilot rests a foot on one of the rudder pedals. Not incredibly complicated but nicely effective. As with all rudder trims, it must be adjusted with every change in flight configuration.

The coolest rudder trim system is a yaw dampener. This is basically an autopilot type electric servo attached to the rudder control system. It senses yaw and applies rudder pressure to hold the ball centered. That’s all it does. Unfortunately, yaw dampeners are pricey and rarely show up on single engine piston Cessnas. 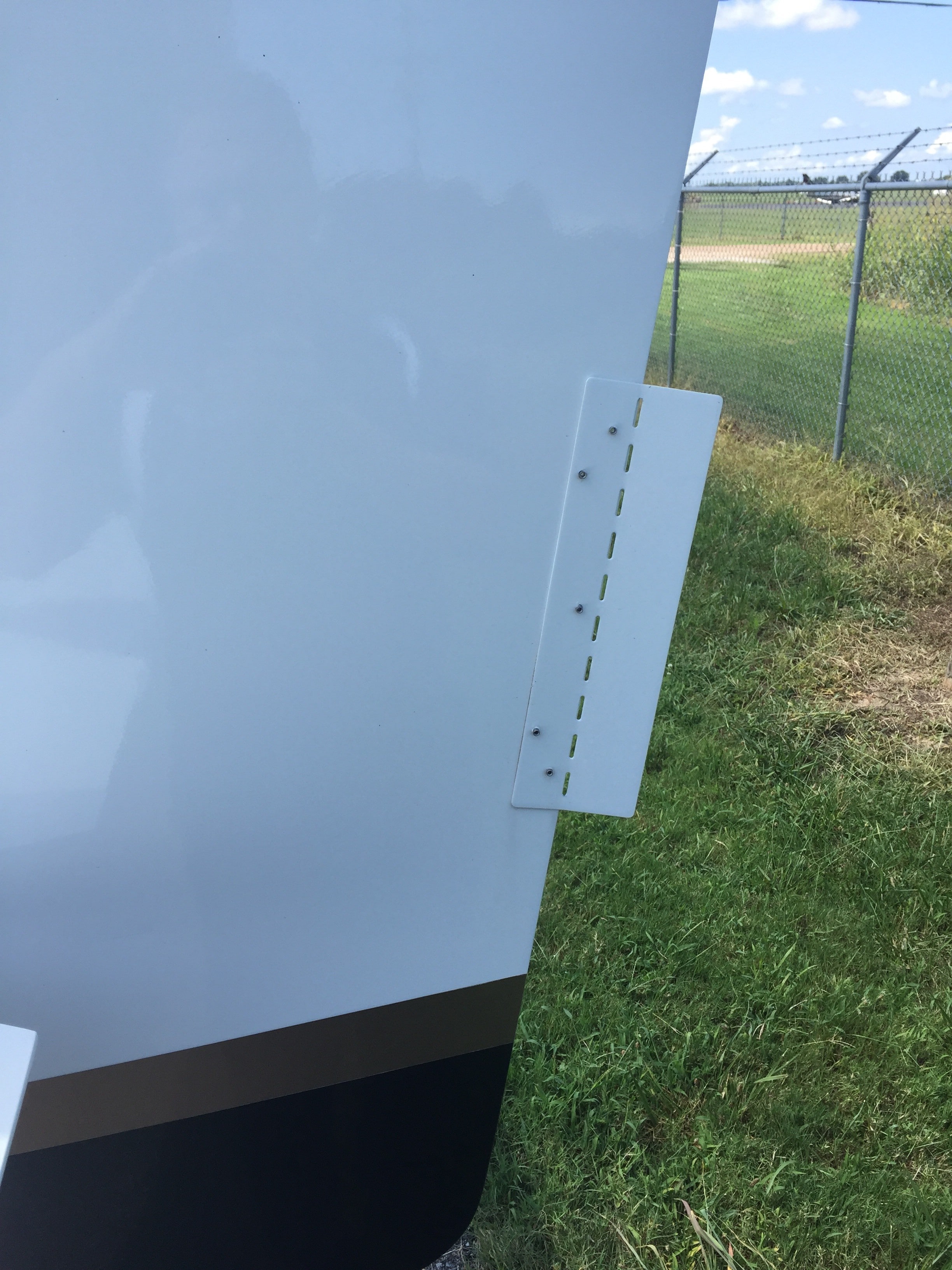 A fixed rudder trim tab on a Columbia 400 with very little deflection.

For me, the oddest rudder trim type system is found on some of the Columbia/Corvalis/350/400/TTX airplanes. It’s a strange hybrid of the fixed rudder trim tab and a device that the pilot can engage to lock the rudder control in a fixed position. The rudder tab is very standard in its mounting and appearance. The hold device almost looks like an autopilot servo without the motor.

The hold device has a capstan with a bridle cable which attaches to the rudder cable. The pilot can engage an electric solenoid which effectively locks the rudder control cable in whatever position it is in. If the pilot applies a certain amount of force to either pedal, the capstan trips a position switch, and the system is released. Even if the system doesn’t release, it is easily overridden by slightly higher than normal foot pressure.

The rudder hold is a very simple system that rarely needs maintenance. When it does, it’s a pain. The device is buried in the bottom of the center console near the firewall. Access includes head stands, mirrors and a few choice words, especially on the TTX installation.

There is a performance test listed in the maintenance manual. External electrical power is applied to ensure the solenoid has full engagement. Flaps must be in the up position as the system won’t engage if it detects a takeoff or landing configuration. With the system engaged, one can apply forty to fifty pounds of force to one of the rudder pedals to ensure it will disengage. A gentle force below the forty pound threshold will move the rudder but not disengage it.

As a pilot I find the fixed tab to be the least useful method. I also understand it to be the most cost effective for the lower horse power planes. The spring loaded system and the true in flight adjustable tab designs seem to give about the same level of operational benefit. The comparative functionality of the rudder hold is still uncertain in my experience.

Every solution has its benefits and issues. A good understanding of each system’s operation and purpose is important for any pilot or mechanic. For pilots, I believe it’s important to realize the primary purpose of all is to hold the ball centered for all normal operations. The only system that truly accomplishes that goal is the yaw dampener. All others merely apply pressure to the rudder system in one form or another.

For mechanics who may not be pilots or fully understand the purpose and aerodynamics of the trim system, it’s important to understand the operational design. Spring loaded systems must be properly aligned so pilot inputs yield expected outputs. Fixed tabs should be adjusted in small increments, then flown to confirm setting in chosen flight configuration. Rudder hold mostly needs to be checked to confirm it will release when needed.

I get frequent calls and emails from owners and mechanics regarding flight control rigging. A common theme is how much rudder a pilot must apply to keep the wings level. I try to explain how it isn’t the rudder’s job to hold the wings level. In all normal flight operations the rudder’s job is only to keep the ball centered for yaw control. The secondary rudder control (trim) is only there to relieve the pilot workload required to maintain the ball in that centered position.

This isn’t my usual technical focused article so my apologies for venturing out into the dark side of piloting. It’s just come to my attention lately how common it is to blame rudder system rigging for what is actually a roll issue. I believe a good understanding of the true function and limitations of each yaw control system is important for safe and successful aircraft operation.

In the photo you might notice the top portion of the capstan is black and the lower is silver. The contact surface between the two is a near sine wave shape. The black capstan incorporates the bridle cable to the aircraft’s rudder cable. When not engaged, the entire capstan rotates freely with the movement of the rudder cable. When engaged, the silver portion is locked in position. 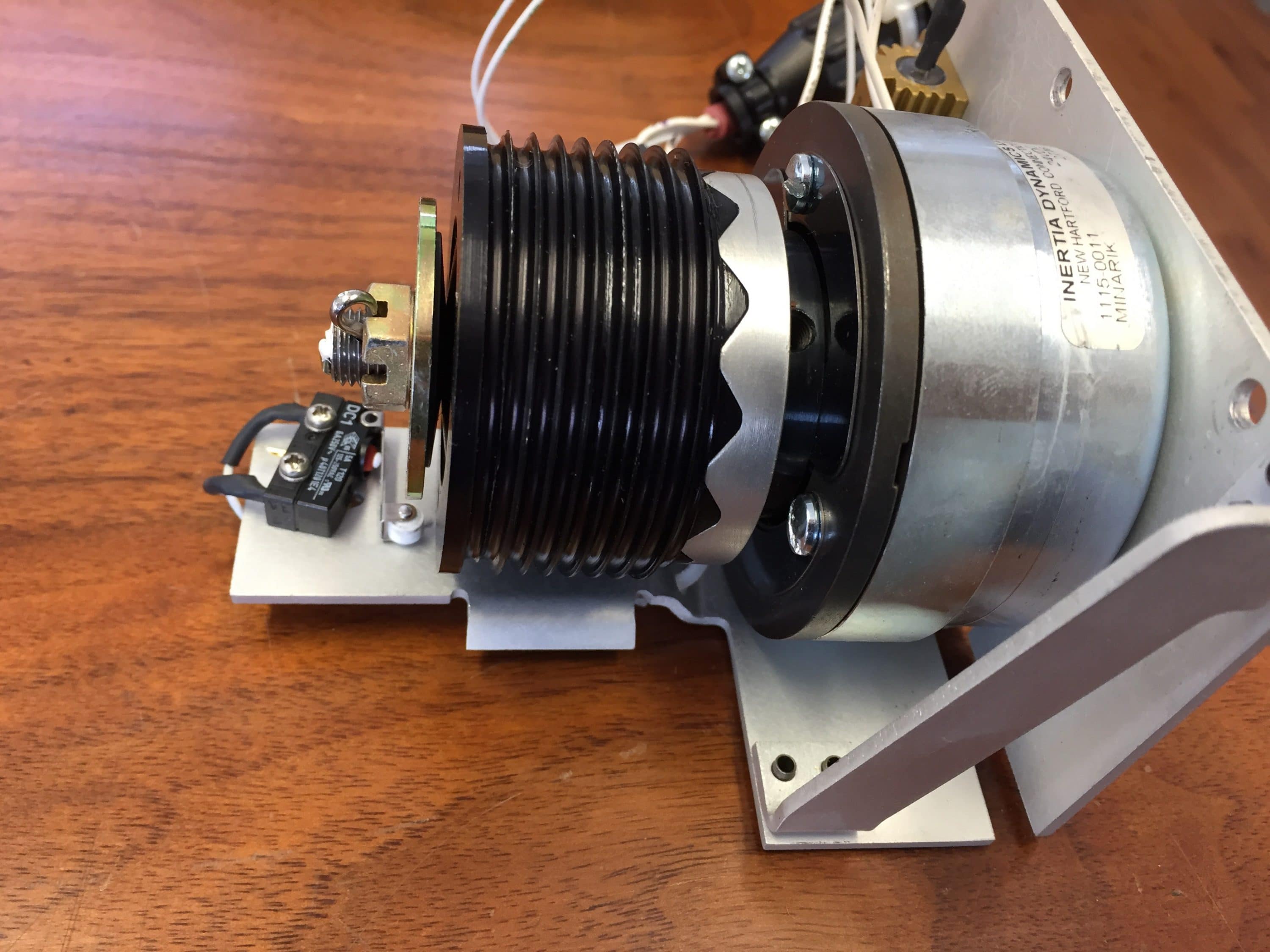