I cringe every time I hear the phrase “there’s more than one way to skin a cat”. First, who would do such a thing and why would they ever do it? The underlying truth remains that there are usually multiple methods to accomplish a task. The Vedic Science principle of Economy of Effort (EE), or “do less and accomplish more” suggests that selecting the solution of least effort is the preferred path. I recently had the opportunity to put these thoughts to the test when evaluating the repair options on a Cardinal wing that had a fight with a bird.

A related topic to EE is Reliability Centered Maintenance (RCM). RCM mostly deals with the decision making process as it relates to when maintenance should be performed and what maintenance is justified. The options weighted are when to overhaul, when to inspect, when to replace and how do these actions affect reliability, safety and cost. EE, in my context, relates to how a repair or maintenance is performed. When choosing repair methods we must consider cost, downtime, parts availability, repair longevity, aesthetics, safety, and future inspectability of the repair.

A bird strike on the leading edge of a Cardinal wing presents several options for damage resolution to use as a test of EE. I’ve written about a similar repair before but not the decision making process required going into it.

A small bird can do significant damage to the thin Alclad 0.032” skin when impact speed exceeds 120 knots. After close examination we discover the skin is pushed in and slightly creased at the top and bottom of the dent. There is no cut or hole in the skin. Access to the inside of the wing in this area is very limited due to the forward spar being just behind it and the closest access panel being eighteen inches outboard of the damage. Oh, and the access panel is an oval shape that I can just get my arm into just past my elbow. I can stretch and touch the inside of the damage area. What I can’t do is remove my arm without leaving DNA samples on the edges of the access hole.

Option one is to attempt a reshape of the leading edge and finish with fill and paint. This involves holding a contoured backup bar inside the skin while strategically applying pressure to the outside, possibly with a mallet. One significant obstacle is the hardness of the aluminum skin. The outside surface of a bend stretches the material, and structural aluminum doesn’t like to shrink back to its previous contour. Basically, the reshaping is just more bending which is more stretching which can enlarge the area to the point of unusability.  This would be a great option but just isn’t going to work this time.

Option two is replacement of the entire leading edge skin. Due to the overlap of the next skin inboard, this method actually involves removal of two skins. Worse than that, it requires complete removal of all fuel tank sealant and application of new. For reliable wing symmetry, it should be removed from the plane and installed in a support jig during the structural part of the repair. Every operation adds labor, materials, complexity and risk.

Option three is wing replacement.  I know this sounds extreme, but it can and has been a viable financial choice in some situations. Removal and replacement of a Cardinal wing can easily be done in about twenty-five man hours including rerigging the controls and confirming the affected systems. One might need to paint the replacement wing to match, which is an added cost. There is also the unknown condition of the donor wing’s fuel tank sealant.

Option four is to cut out the damaged area and install a flush patch. This repair scheme is conveniently detailed in the aircraft service manual so no engineering work is required. The finished product is structurally sound and best of all doesn’t interfere with the fuel bay. The possible downside is that it’s right on the front of the wing, which means the cosmetic fill, prime and paint work needs to be excellent to minimize the appearance of the repair work.

So which method is best? Option one is out as the hardened aluminum won’t conform to our manipulation. Option two blows out the budget and creates lots of opportunity for additional problems. Definitely a last resort option. Option three is a contender if only a donor wing can be found in a reasonable length of time at a reasonable cost. Option four turns out to be the path of least resistance.

By choosing option four we are able to invest the least amount of labor and disrupt basically no aircraft  systems while still producing a proper repair. The fuel tank seal is not breached or even touched. No wiring gets disconnected or cut. No fuel lines, aileron cables or flap cables are separated. Doing any or all of these things would significantly increase the risk of producing some safety issue or maintenance induced failure.

Now that the options are determined, the owner agrees with our recommendation, and we’re ready to start. The first cut is the most unsettling, as it defines the point of no return.  We cut away all the damage area but want to keep as much original material as possible. We’re also aware that we must have enough original material width between the cut-out and the wing spar to attach the interior repair reinforcement ring. Somewhere in this process we have to figure out how to get this reinforcement ring inside the wing through a hole that’s much smaller than the ring. Details, details, details. 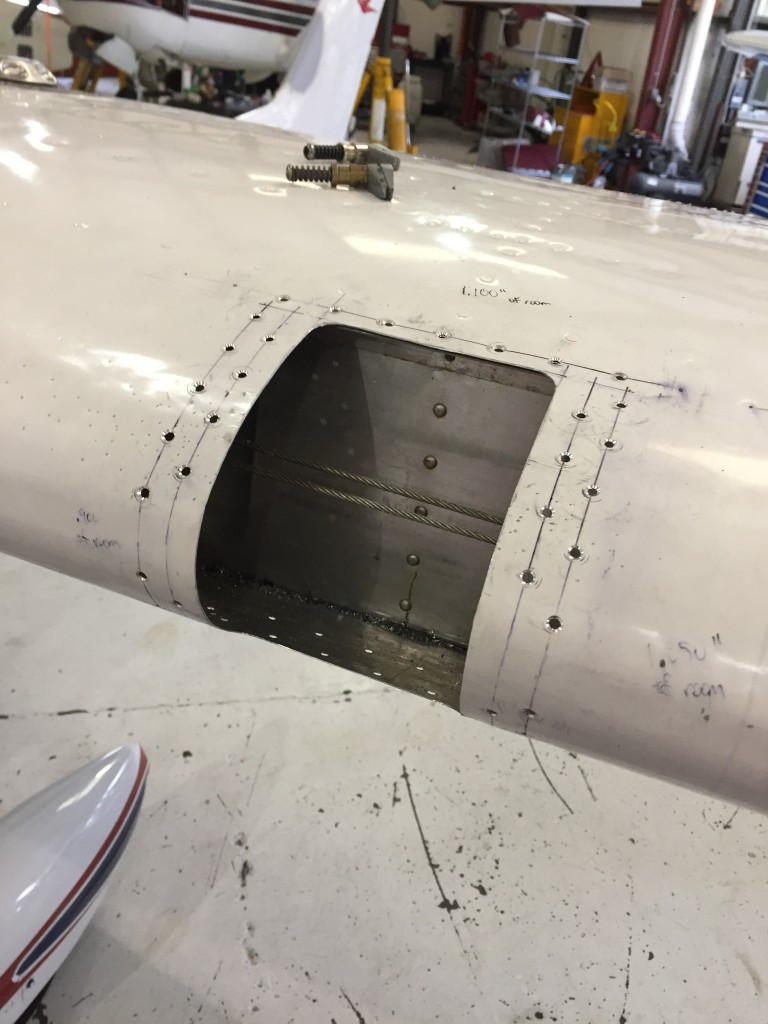 The final cut out is six inches wide and twelve inches from top to bottom. We use one-half inch radius trims in each corner to minimize stress risers. This is a flush patch so we slide a properly contoured plate of the same thickness as the wing skin inside the wing.  It’s pressed up to the newly cut out hole to trace an exact outer edge shape onto the contoured plate. After cutting, this plate becomes the filler piece for the hole. 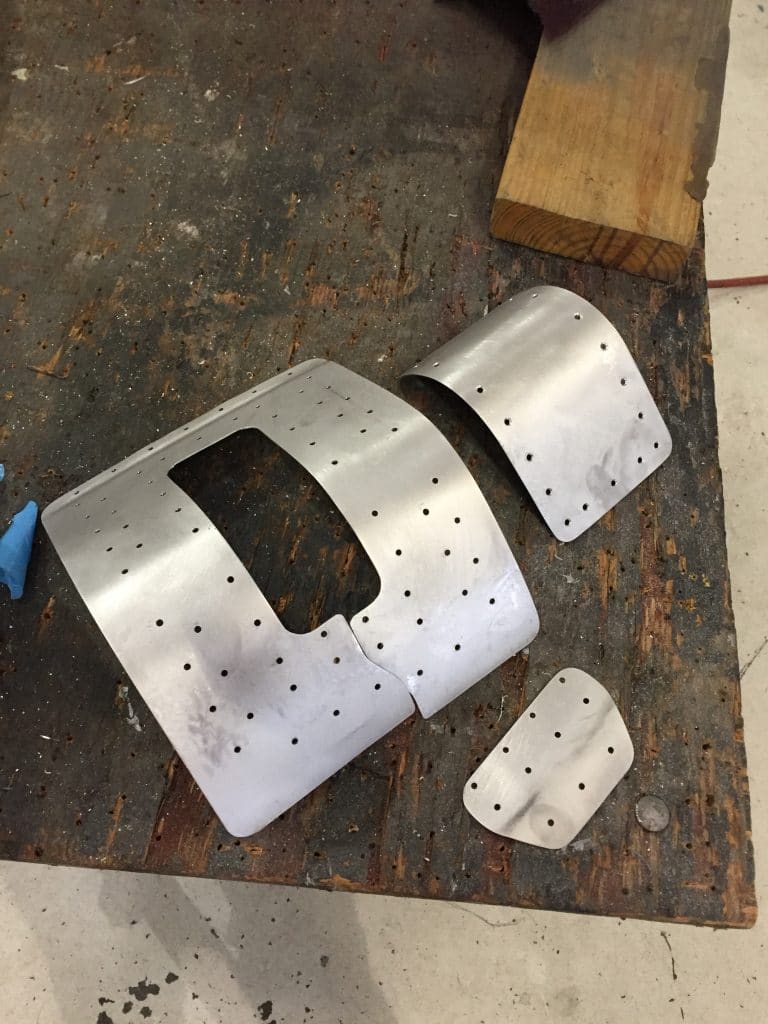 All the parts cut and ready for priming

Our theory is that repairs should be as invisible as possible on the airplane, we’ll expose them fully in the paperwork later. To that end, the rivets installed all need to be flush. The skin is only 0.032 thousands of an inch this, so we can’t use countersink cutters to allow the rivets to lay flush with the top of the skin. Instead, we use a dimpling process which creates a precise beveled hole. It not only allows the rivet to sit flush but also adds strength and rigidity to the repair. 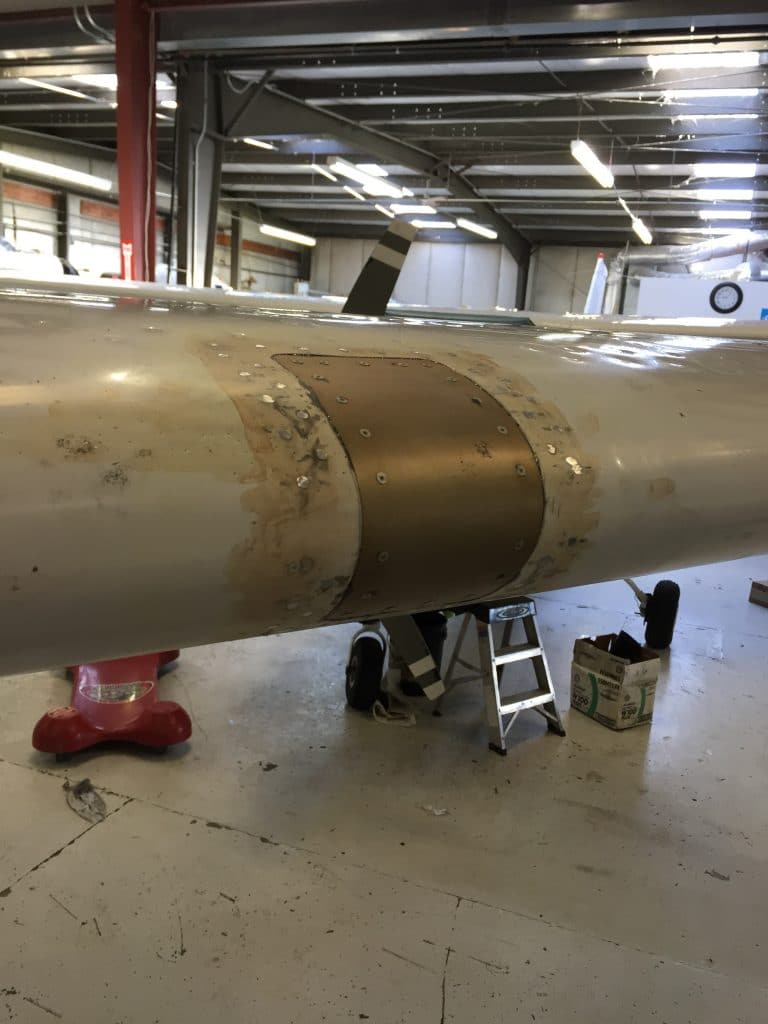 After all the riveting is completed we could just paint the area as is and return the plane to service. It would be perfectly safe and acceptable if it weren’t so visually obvious. It might be fine on the belly of the plane or even on the underside of the wing where several access panels already breakup the surface. On a leading edge we’d like the repair to be less visible. Actually, we’d like it to cosmetically disappear altogether. 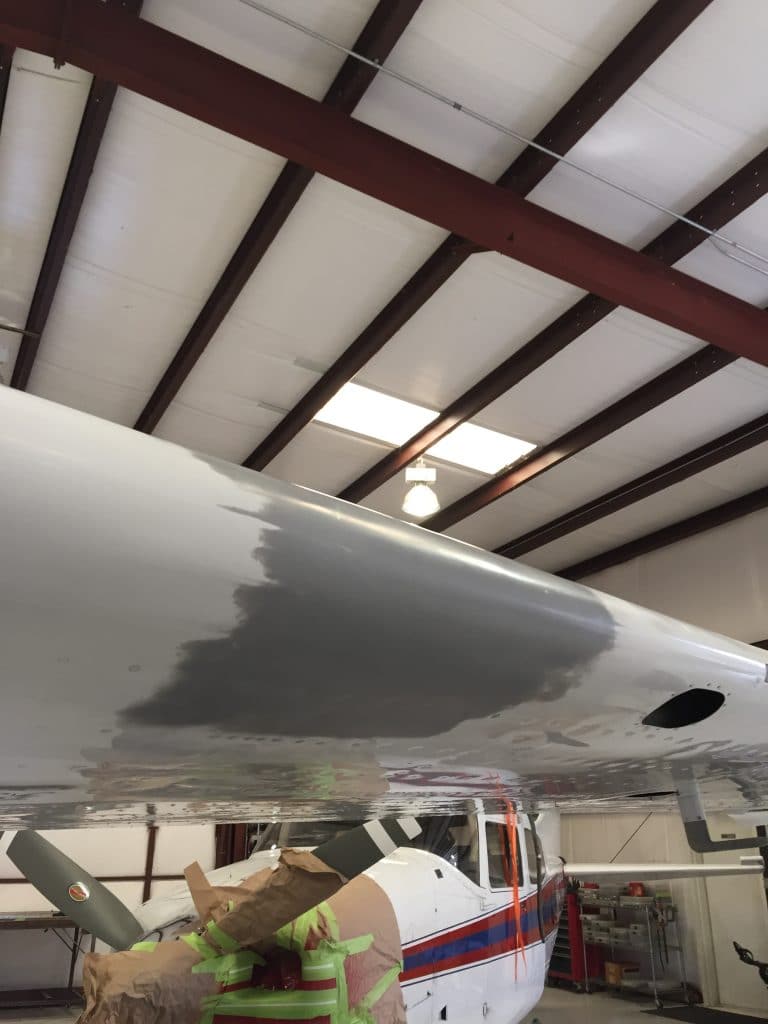 The fill, prime and paint work needed to create an invisible repair can be the most tedious part of the job. Not that the work is difficult, but that the acceptability of the finished product is so subjective. What a mechanic thinks is beautiful might be an eyesore to the owner. We do our best and hope for the best. This part is an article unto itself, so maybe we’ll unpack that conversation in some future discussion. 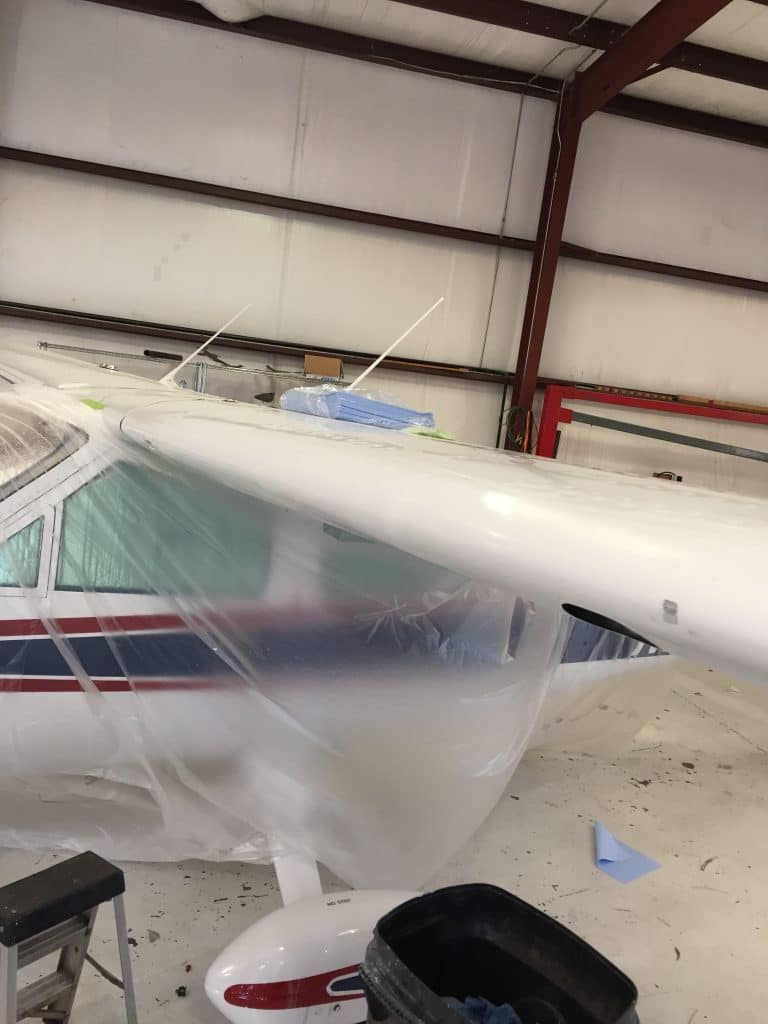 Paint complete. Very difficult to find the repair. Hide the work on the plane but expose it in the paperwork.

For legacy airplanes the need to repair versus replace parts is becoming a progressively more common necessity. There’s no debate that Cessna (Textron) is still the best light airplane manufacturer with respect to legacy support. That doesn’t mean that they have a warehouse full of all the parts we all need. What they usually can and will do is create a part for you. Yes, it’ll take time, but it can still be had. Replacing that entire skin might look better when it’s all said and done, but it may not be the best choice of the repair options.

Most mechanics prefer parts replacement because it’s usually the most efficient path from their point of view. Other mechanics like to repair things because we enjoy the challenge of using specific skills to produce something. Others just want to get the job done and aren’t very interested in the method chosen as long as its quick. If you’re having structural or sheet metal work performed, you probably want the mechanic that likes to repair things. The next time repairs are needed, ask for options and apply good EE logic in the decision making. You still want to be the one making the final decision, based on the best EE option proposed by your favorite chosen repair person. 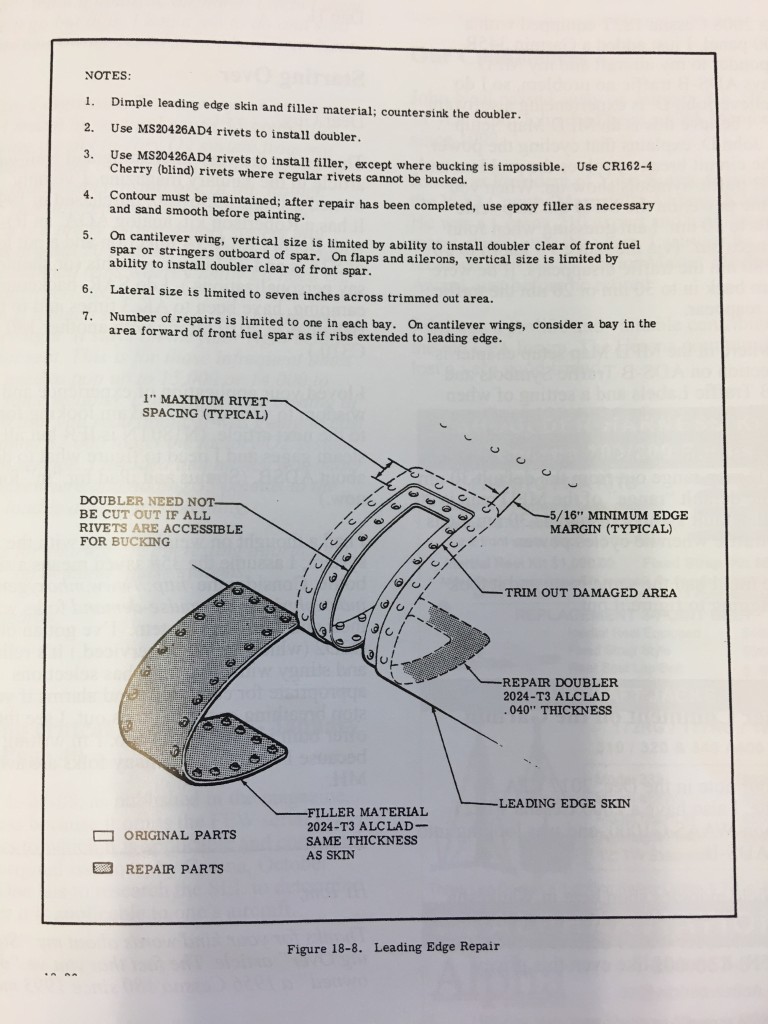