As pilots, we all learned about the various forms of ice that might try to kill us if we flew in certain dangerous conditions. We learned about the dangers of attempting to fly with just a little frost on the wings. Some of us learned to cycle our landing gear a couple of times after take off from a wet or slushy runway before climbing into sub-zero temps where ice could form and inhibit proper landing gear extension at our destination. What many of us may not consider is what insidious mayhem frozen water might be capable of when hidden inside our fuel system.

I wish I’d had my head screwed on straight when I was in school. Things happen at work that cause me to research all sorts of topics. At some point into the research, I often realize I was taught that particular topic in high school. I didn’t really learn it, but I did sit through it in class.  Now, all I can think of is how much time I’d be saving had I learned the information back then instead of compulsively researching it now. The fascinating and unique properties of freezing water is my latest diversion.

Frozen water is a way more bizarre substance than I ever realized. I learned about water expansion in the old style ice trays from my chemist mother. In college days an amateur geologist co-worker taught me about the technique of freezing water-soaked rocks to get them to split apart in hopes of revealing some potential hidden treasure. I recall the first time I forgot about the sodapop I put in the freezer at work and found it basically exploded the next day. Most recently, I learned that there may be as many as seventeen different types of ice. Of course, some of those may only exist in space, but it’s still amazing to consider the power water can exhibit when it gets really cold.

I recovered a friend’s T210 from where it had been in outdoor storage for about a year. This was a maintenance ferry flight to my shop due to the plane being past due for its annual inspection. As always, and as required by FAA, I performed a fairly extensive inspection of the plane to ensure it would be safe for my intended 320 nautical mile long flight back to our shop. Draining all seven of the fuel sumps was early in the checklist.

I try to always drain from the highest points of the fuel system first and work my way to the lowest. My theory being that if there is some water or debris in a tank, draining a lower sump might draw that water/debris into a fuel line. Then draining the related tank wouldn’t show any problem. The water/debris would be hidden partway between the wing tank and a lower sump, just waiting for the engine to start so it could migrate into a better place to create trouble. Wing tanks first, then belly sumps, and finally the gascolator. 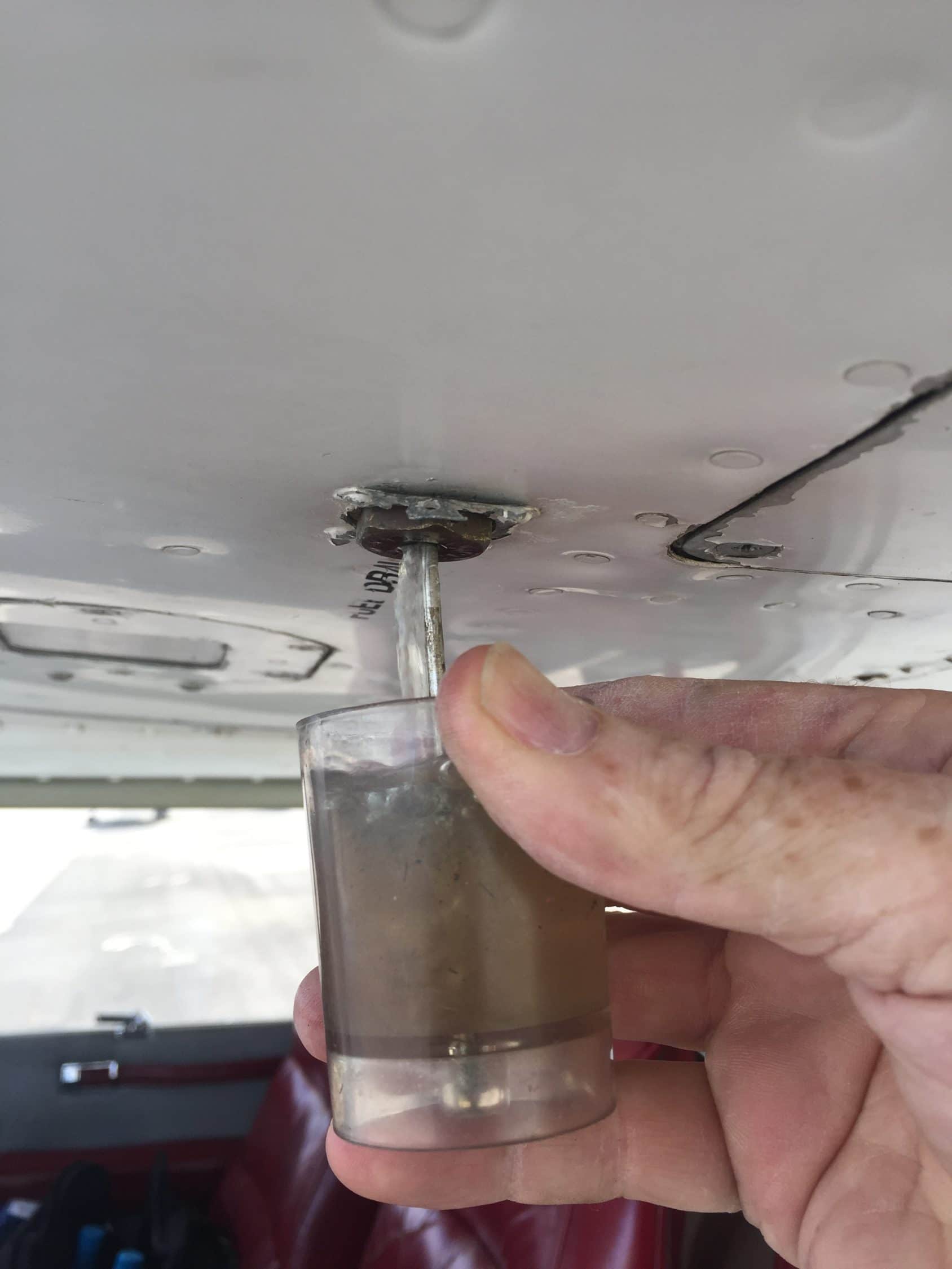 Drained wing sumps first. I lost count but at least 20 samples from each wing like this one. 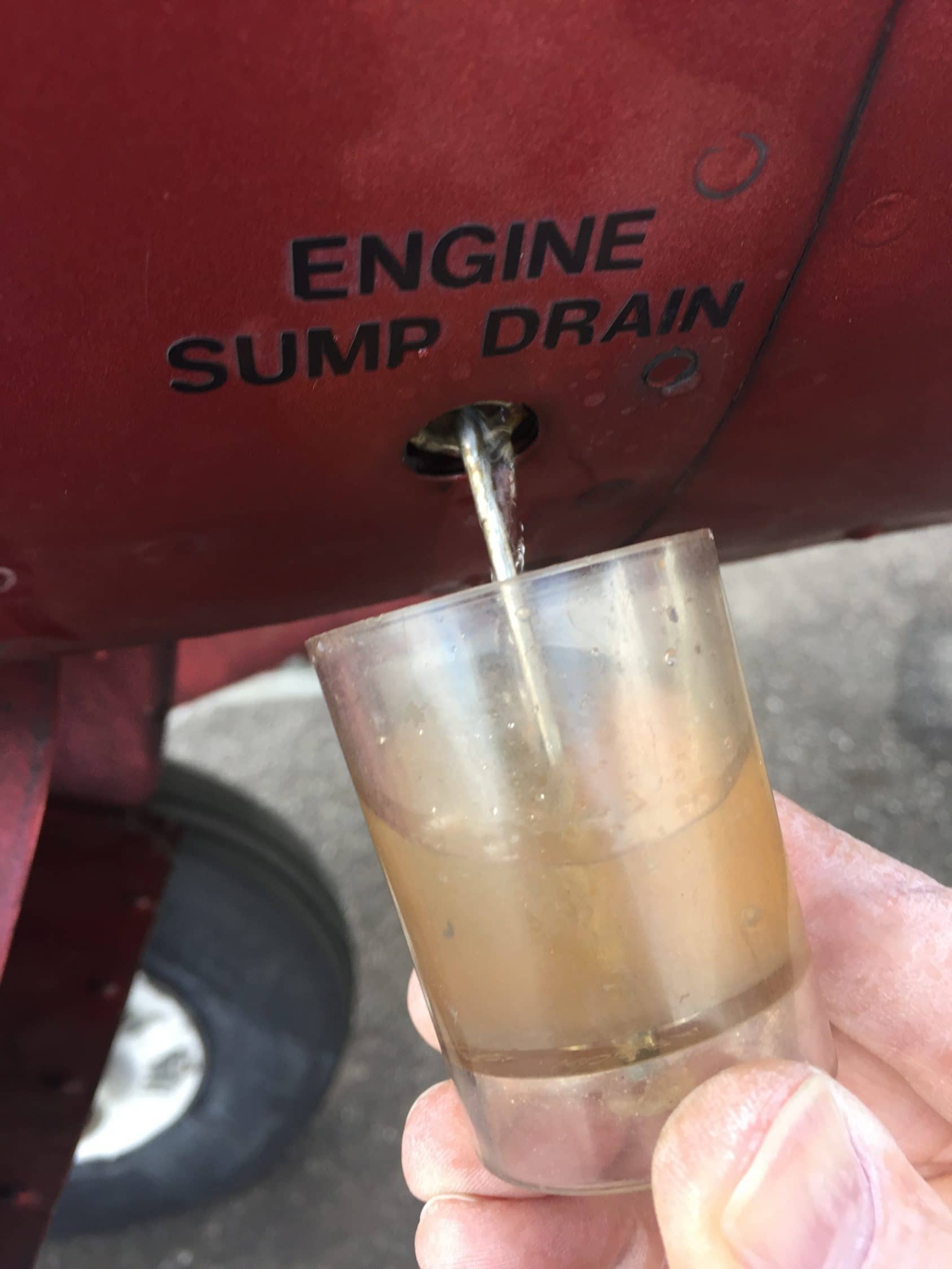 Drained the gascolator last and got several full water samples.

I noted the Flint tip tank drains were rusted closed. Note to self: don’t transfer any fuel from the tip tanks for this flight. Draining main wing tanks showed only water in the first sample. About twenty sample cups later, with some wing rocking, and all the samples look like pure 100LL Avgas. The belly sumps for the header tanks took quite a few sample cups to get clear Avgas, too. Finally, the gascolator drained all of its water as well.  I repeated the entire process at least two more times just to get that warm fuzzy feeling about it. It was obvious the fuel caps had a seal issue. I performed a good ground engine run, then I drained everything one last time and got all clear Avgas. The flight home was uneventful with no indications of water in the fuel while in flight.

During our work to restore the plane to airworthy status, it had to be parked outside for a couple of days. Naturally, it was during several of the heaviest rainfall days we have had in a long time. For some reason the original water-logged airplane found at recovery and the latest rainfall just didn’t click in my head.  After the annual and repairs were completed, the plane again had to wait outside for a good weather day for the post maintenance engine run and flight check. Naturally, that was during one of the coldest spells of the winter and included one day in which we had the notoriety of being the coldest spot in the United States. Pretty impressive for a small city in Tennessee.

A few days later the ambient temperatures finally returned to a much more sane above- freezing range. I looked out my office window and saw something dripping from the belly of the plane just aft of the firewall. I was sure just some of the frost was melting or rain water dripping from one of the belly drain holes. When I drove out for lunch, I could still see a small continuous stream of liquid coming out of the plane. As I approached the plane, I could tell by the way the liquid soaked into the asphalt that it wasn’t water.  I crawled under the plane and saw the leak source was at the hole in the belly at the electric fuel pump vent pipe.

My first thought was that the pump seal retracted due to the extreme cold temps and allowed fuel to leak past it into the drain. When seals leak due to cold, they don’t normally allow this much fluid to pass and not for this duration. More investigation was definitely called for.

We removed the cabin floor access panels just aft of the pilot’s rudder pedals to see the Dukes electric auxiliary fuel pump. What we found was a belly full of Avgas and more coming. The tank selector was moved to the off position, and we all stepped away from the plane with thoughts of self preservation.  It took until the next morning before the “waters” fully receded enough for us to see the source of our leak.

The pump side of the electric fuel pump casing had one-half totally separated from the main assembly. This massive opening in the near lowest part of the fuel system allowed all the fuel in the selected tank to make its way into the belly then out through any open hole in the belly skins it could find.

This little aluminum pump housing is fairly stout, so I wanted to know just how much pressure it might have tried to withstand. I again searched the internet to learn about the power of expanding ice inside a container. There has been a good amount of research over the years on this subject, and the results are very interesting. There are variables, but at a minimum, regular ice will exert 30,000 pounds per square inch to the inside of a solid container. The normal expansion of ice is about 9% by volume. I didn’t calculate the inside surface area of this pump housing, but it’s easily two square inches. I’m still pondering the structure of a container needed to withstand 60,000 p.s.i., but our little aluminum pump sure wasn’t it. 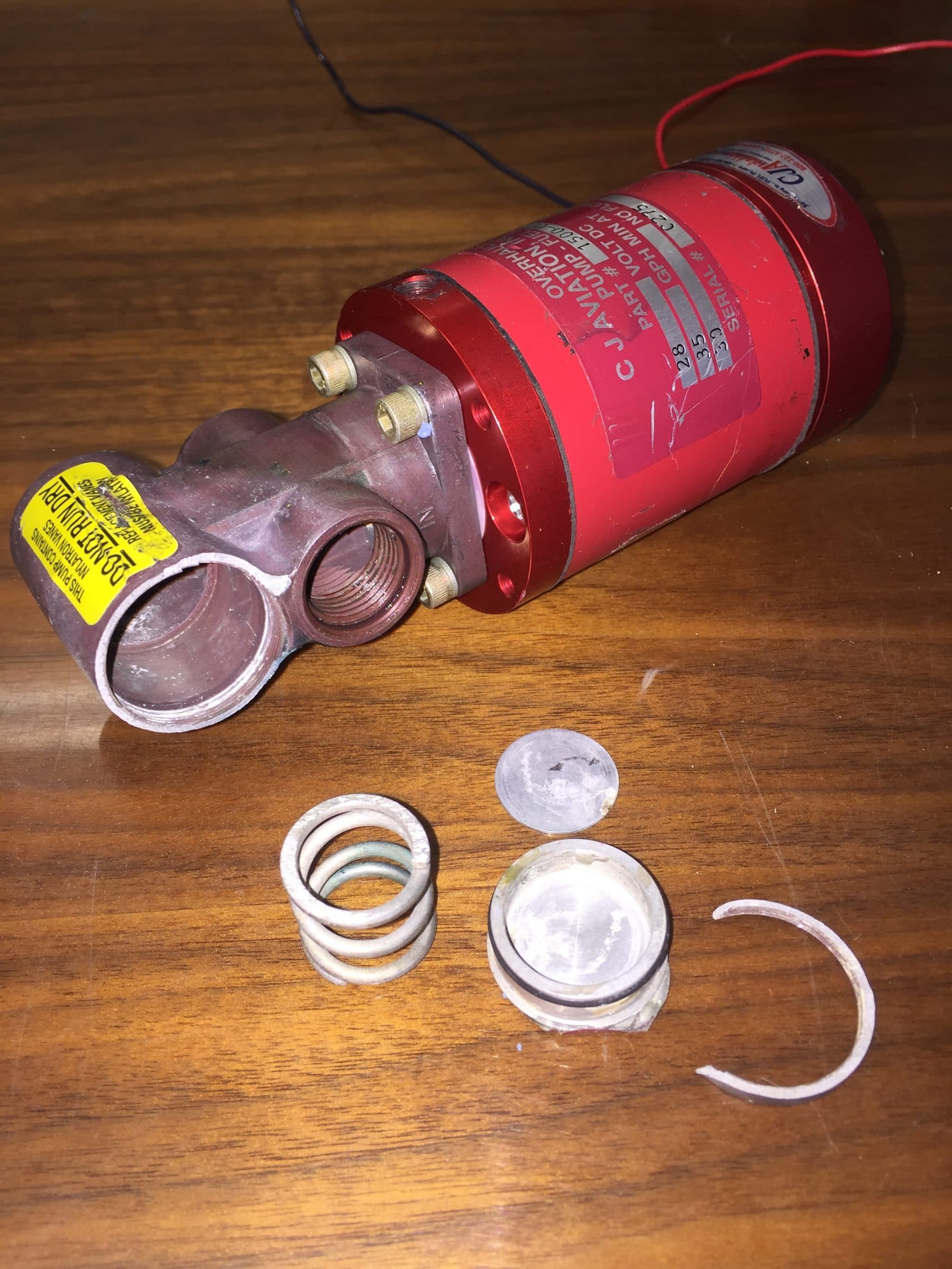 Fuel pump with parts found in the belly. 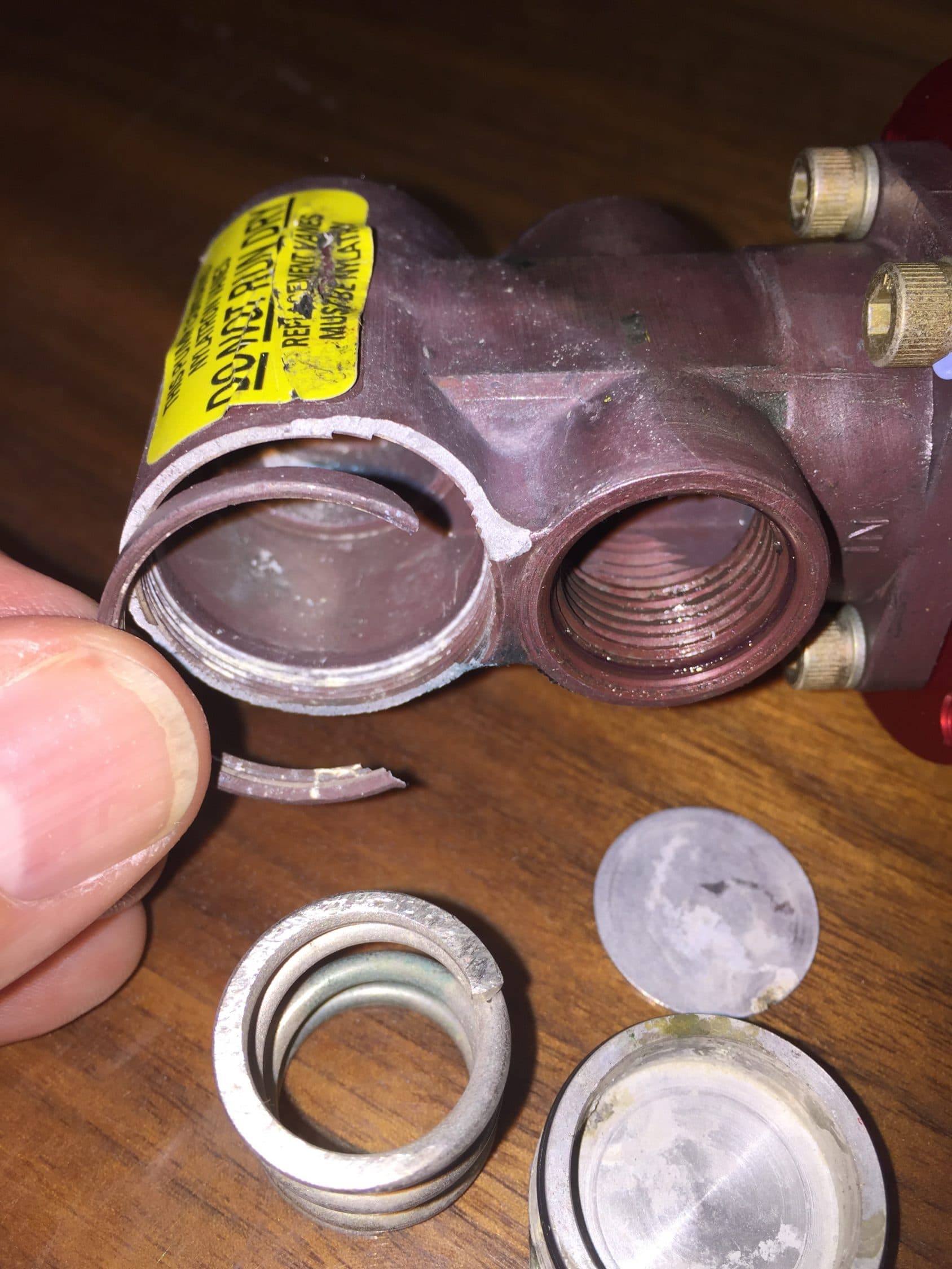 The crescent shaped piece is what broke off, allowing all the insides to exit the pump.

Water reaches its highest density at four degrees Celsius and expands from there as it either heats or cools. As water becomes ice, it forms a crystalline structure where each water molecule is held away from adjacent water molecules a distance equal to the length of the hydrogen bonds. The 9% expansion from this crystallization increases the volume of the water but not the weight, which is why ice floats.

I’ve experience plenty of frozen sump drains in the past, but they were usually just an annoyance. The flight would be delayed until temps increased and the melted ice could be drained. There wouldn’t be any concern for damage since the fuel tank allows plenty of room for the ice expansion. The restricted size of the fuel pump or the gascolator is another matter. This isn’t the normal winter operational concern but potentially very dangerous should a major leak occur during flight.

I realize this article will go to print late in the winter flying season, so just consider it food for thought. If your plane lives outside or gets stuck outside while traveling, you might need to consider draining the sumps from time to time to ensure no water gets into places it shouldn’t.  Paying particular attention to sumping before the temps drop into the freezing zone will help you avoid bringing on the Hulk like power of Ice.