Fire around anything in aviation is one of my greatest fears. I’ve had some experience in this area, so I’m always on my soap box speaking out to anything relating to preventing fires in places where they shouldn’t be. If one isn’t aware of these areas of concern and not paying close attention, dangerous events may unfold. The electric fuel pump is one of those very concerning items where fuel, air and spark reside in very close proximity.

The electric rotary fuel pump is constructed as a 12 volt electric motor driving  a vane type pump. The motor and pump are attached to each other as an integral component via a common shaft. There is a space, or cavity, between the motor and the pump where any fuel leaked from the pump can accumulate. The cavity has a drain so the leaked fuel can exit before the cavity fills up. There are two seals on the shaft, one where the shaft exits the motor to the cavity and one where the shaft exits the pump to the same cavity. The design separates the pump from the motor, adding a layer of safety to prevent the flammable avgas from finding the igniting sparks from the electric motor brushes.

The Cessna 210 first used an electric rotary pump when they upgraded the plane’s engine to the IO-520 in 1964 for the 210D.  From then through the 1968 (T)210H model, the rotary pumps were mounted vertically inside the nose wheel well on the left side wall. This is particularly interesting because the orientation puts the pump on top and the electric motor below. In this configuration, any fuel leaking from the seal around the shaft runs directly to the seal of the motor. Fuel leaking into the cavity puddles around the motor seal before it eventually builds up enough to begin making its way out the side mounted cavity vent tube. Connecting the dots, if the pump seal is failing, it is logical to believe the motor side seal is also failing. Taking the thought one step further, if the seals are bad enough that fuel leaks out of the pump, then it might also leak into the electric motor.

Beginning in 1969 the pump is mounted in an almost horizontal position under the cabin floor panel just aft of the pilot’s rudder pedals. In this position, any leakage from the pump finds the path of least resistance is out of the aircraft through the vent tube instead of into the electric motor. This helps maintain a much safer separation between the fuel and the electric motor.

My first introduction to a leaking electric rotary fuel pump was many years ago on a Mooney. On this particular plane the pump is mounted horizontally under the floor with the cavity vent going straight down out through the belly skin. I noted the pump wouldn’t run, so troubleshooting ensued. Electrical power and a ground to the motor were confirmed, but it didn’t turn and didn’t pop the circuit breaker. The problem appeared to be limited to some failure of the pump motor. When the pump was removed from the plane, I noticed something sloshing around inside the assembly. That’s when I realized a dirt dobber had clogged up the vent line and the electric motor was full of avgas! 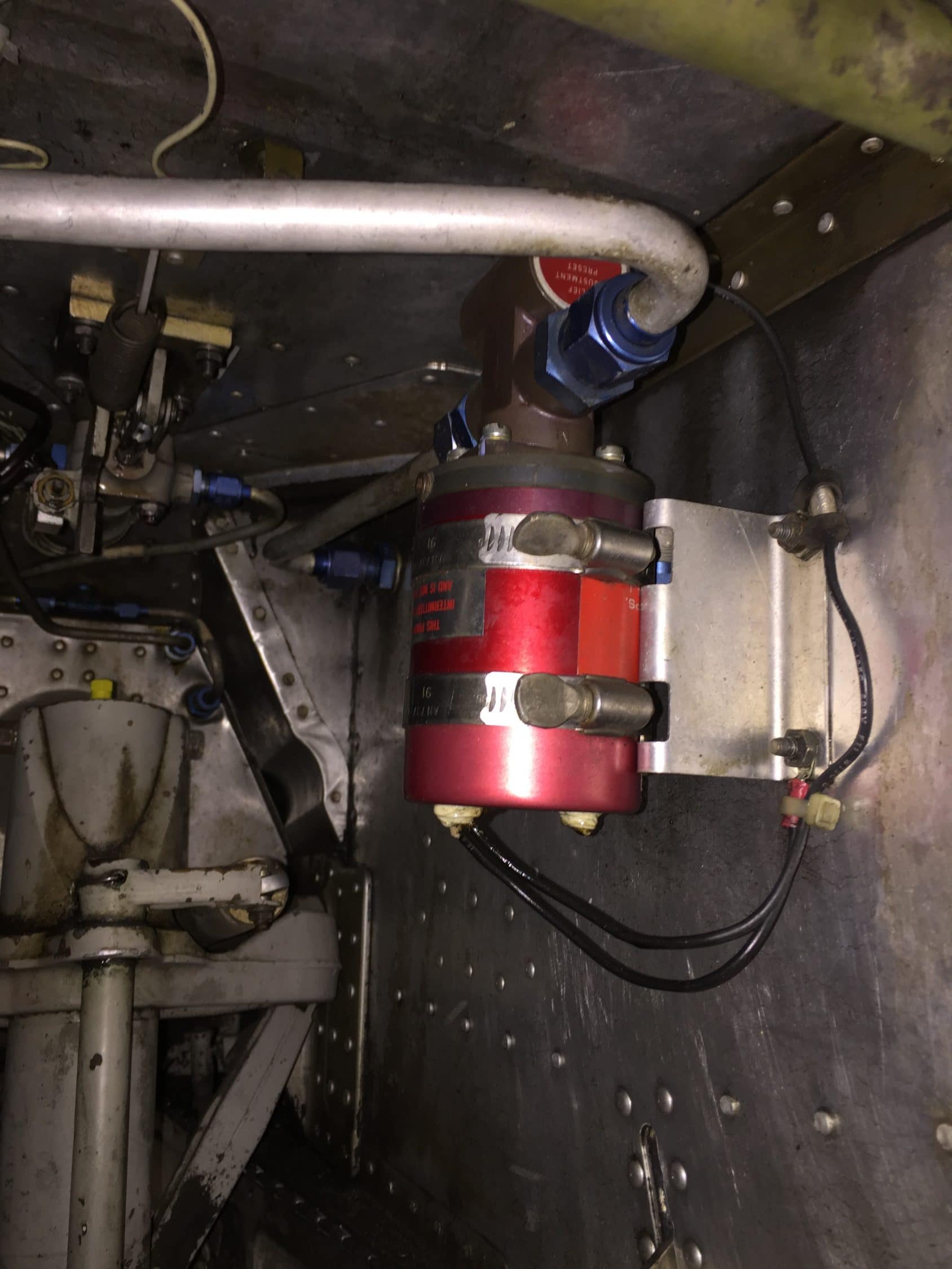 A view inside the nose wheel well looking aft at the pump assembly mounted on the left side wall. Note the fuel lines attached at the top at the pump portion and the red “can” on the bottom which is the electric motor.

At that point, all I could think about was how many times I had switched on electrical power to the pump’s brushes during the initial troubleshooting.

A DC motor, like the one on the rotary fuel pump, creates massive amounts of sparks where the internal brushes contact the rotor as it turns. If you’re curious how that might look, pull the trigger on one of those battery power drills in a totally dark room. The sparks inside the motor will light up the room. Having such a potent ignition source inside a container filled with fuel is a scary combination with potentially explosive consequences.

Recently, we were preparing to perform a post annual engine run on a friend’s 1965 210E. Everything was checked and ready for the run. The auxiliary fuel pump was switched on to purge the air from the fuel injection system and the pump circuit breaker tripped. After a minute or so, the circuit breaker was reset and the pump engaged a second time. That time there was nothing, no pump running, and no circuit breaker tripping. It was just tested a few days before as part of the annual inspection. This felt very familiar, as if I’d experienced it before. Maybe a slight case of deja vu.

In  this situation, the circuit breaker tripped initially, indicating a high current draw possibly caused by a short. Subsequent attempts to power the pump did not trip the breaker. The pump didn’t run, indicating an open circuit. An open is when two current carrying parts that should touch don’t.  Circuit breakers are in place to protect the wiring from melting and causing fires, not to protect the equipment at the end of the wire. Our next step in troubleshooting was to determine if the wires to the pump had opened. 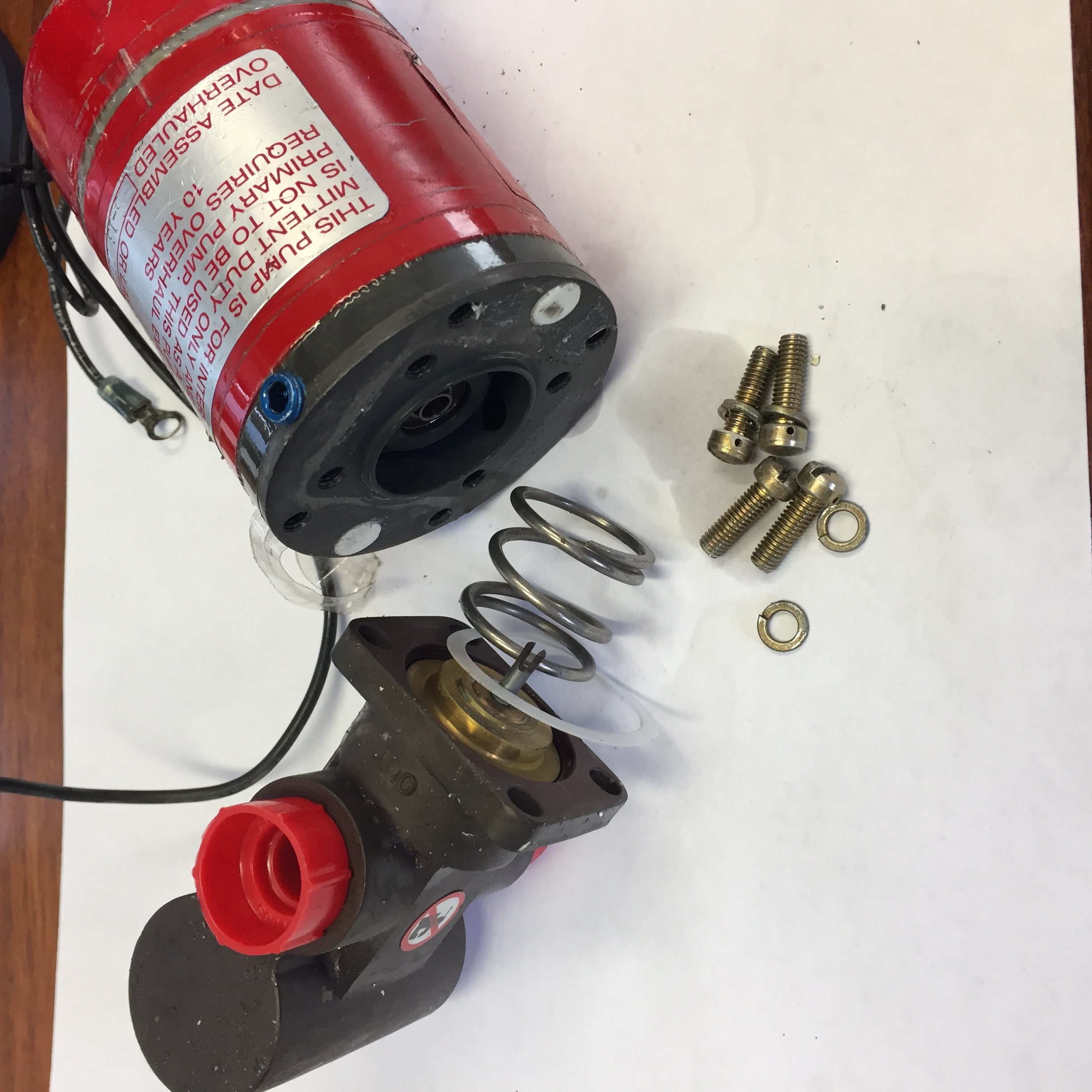 The pump section on the left and the electric motor on the right. When together, there is a small space between which serves as the “cavity” for leaked fuel.

A quick check with a voltmeter at the pump told us that full battery voltage was available. Now the suspicion turned to the pump itself. It was getting power but not operating, so there must have been an internal open. There’s no field repair for these pumps, so we decided to remove it in preparation for installing a replacement.

Once we removed the pump assembly, we heard a sloshing sound from inside the motor. Certainly not a sound one should hear from an electric motor. We decided to dissect the pump out of curiosity and remove the four screws that held the pump to the motor. To our dismay, the sloshing sound was from all the avgas inside the electric motor side. As it turned out, the open space in the electric motor can hold almost a quarter cup of avgas. It may not seem like much, but it only takes a small spark to really light things up with that much avgas.

There are several drain ports on a 210 that might drip a little avgas from time to time.  During maintenance, it’s common to lose a little fuel, engine oil, or hydraulic fluid on the shop floor. While looking around where our subject plane was parked in the shop, we noticed all the usual mess that needed to be cleaned up. One small blue stain just to the left of where the nose wheel was caught our eye.  Evidence suggested the electric fuel pump began leaking at some point while the plane was sitting there.  This leak may have existed for some time but went undetected until the motor filled with avgas and the resulting overflow made its way down the vent tube.

I’ve noted many electric pumps leaking from their drain ports over the years. Most are on the newer horizontally positioned pumps, so the the presence of fuel drips on the floor is mostly the forewarning that a new pump should be ordered. It’s a safety concern, of course, but serves as a warning to not fly until the replacement pump is installed. On the 1964 through 1968 210 models, the safety concerns are far more dire. The probability of avgas filling the electric motor is a warning to not even turn on the airplane’s master switch. No need to do anything to create the very dangerous combination of sparks and fuel.