A few years ago, I was presenting a CPA Systems & Procedures course at Sporty’s in Batavia, OH.  A major hurricane had pounded the Gulf coast then began a trek across the South and northward into the Ohio Valley.  The winds were ferocious even as far north as Batavia. Everyone that flew in took extra precautions in mooring their planes and securing the gust locks. A few local planes sitting just outside the classroom windows weren’t quite so fortunate.

One sad little 172 was parked with its tail to the wind, and its ailerons and rudder were slapping violently from stop to stop. Eventually, something had to give and when it did, both ailerons were pinned to their full up stops.  Of course, that isn’t supposed to be that way. The class was discussing the implications of the aileron system damage when an even sadder 150 broke from its moorings and flipped on its back as we watched. The mood in class suddenly turned very serious.

A simple control lock installed in the control column of the 172 would likely have prevented the expensive damage.  After the storm passed, both ailerons drooped to their down stops. We reported the issue to the good folks at Sporty’s in hopes to ensure someone didn’t attempt flight after missing this on preflight.  We didn’t have the same worry for the 150 as we all decided an upside down plane would be hard to miss during preflight.

I find it interesting when I come across “new” information about a requirement for airworthiness.  Some may seem silly at first glance, but required items usually have good reason for being labeled as required.  Silly or not, it’s the pilot/owner’s responsibility to ensure all aspects of the airplane properly contribute to its airworthiness.

Our piston engine Cessnas can be divided into two groups; CAR 3 certified and FAA Part 23 certified.  The older CAR 3 airplanes are often referred to as Placard airplanes. This is due to those planes not having a Pilot’s Operating Handbook (POH) as part of their certification.  A POH contains all sorts of important information about the plane including various procedural instructions. The CAR 3 airplanes rely on placards in all sorts of places giving important details about the plane’s proper operation.  There are times when it’s difficult to find a spot on the panel for any newly required placards.

A challenge with any plane is inventorying all the required placards. One must start with a list to use for comparison to what can be found on the plane. The two primary sources for these lists are the airplane’s POH, if it has one, and the FAA Type Certificate Data Sheets (TCDS). These documents state what placards must be installed and where they are to be installed.  If the plane has a POH, then finding the placards is a simple task of checking out Section 2 Limitations. The placards are all listed at the end of the section.  Those with CAR 3 airplanes will need to have a look on the FAA website, www.faa.gov, and search for Type Certificate Data Sheets. A bit more effort than a POH but everything needed can be found.

Looking up the TCDS for your plane is an interesting exercise and well worth the effort. It contains the FAA certification details about specific model aircraft, engines and propellers that few owners realize exist. The TCDS contains information such as on which cylinder must the CHT probe be installed, whether the plane may be flown without the propeller spinner installed, and what placards must be attached to the plane.  Even though verifying the airplane conforms to the TCDS is a standard part of an annual inspection, an owner can easily do the same research for personal edification.

An interesting conversation started in our shop during a routine inventory of  the placards for a 210 during an annual inspection. The POH shows a required placard that must be installed on the flight control lock.  A search for the control lock turned up nothing, but it was discovered that the owner had installed a screwdriver in the control column as his locking device. This is somewhat common, and the immediate concern is a lack of anything to help remind the pilot to remove the screwdriver prior to flight. It wouldn’t be the first time an plane took off with control locks installed. 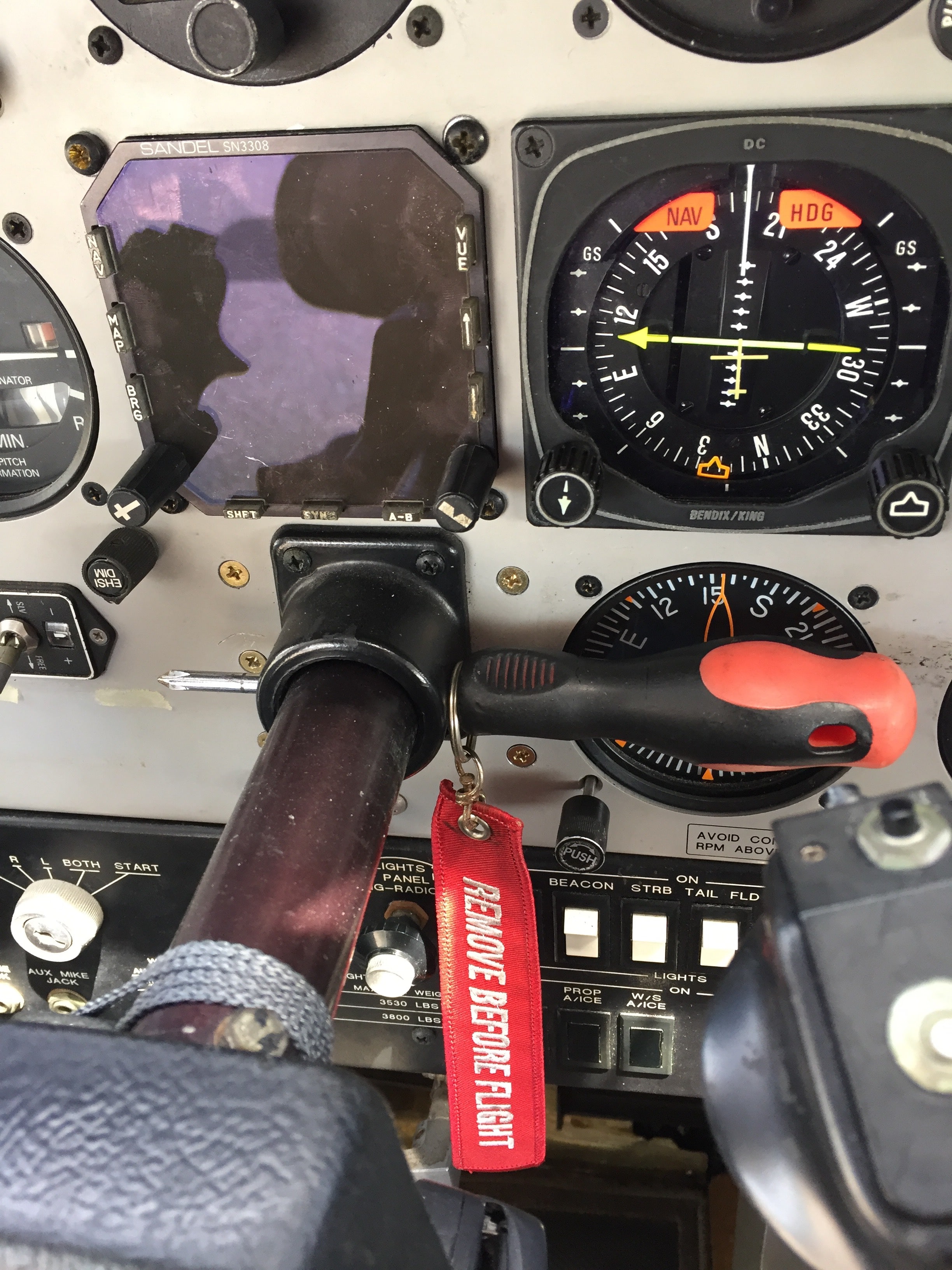 The ubiquitous screwdriver. At least it has some sort of flag attached to it, but still not legal.

A discussion ensued as to the legalities of the plane not having a control lock on board with the placard. Since it isn’t used during flight, could it be considered an airworthiness requirement? If the control lock is required to be used, then must it be physically located in the plane as surface for the required placard? It was a fun discussion, but the paperwork won out, as it usually does.

We know that the placard in Section 2 with the text “CONTROL LOCK. REMOVE BEFORE STARTING ENGINE” is required for airworthiness.  All placards have a required location, some very specific and other quite vague. In this case, the POH specifically states that the placard is to be installed on the control lock. The POH placard listed includes the part number of the control lock as well, just in case someone would consider fabricating their own.  The data is very convincing that the FAA requires the placard be in the airplane and attached to a specific control lock.

There’s still some debate whether it’s FAA required to insert the control lock into the control column when the plane is stored.  I didn’t immediately find any instructions requiring the control be installed when the plane isn’t being flown. The text on the placard itself does make it clear that the control lock must be removed before flight (no debate there). The paperwork requirement to actually use the lock may be uncertain, but the practical and safety value to install the lock, as intended, is an absolute. 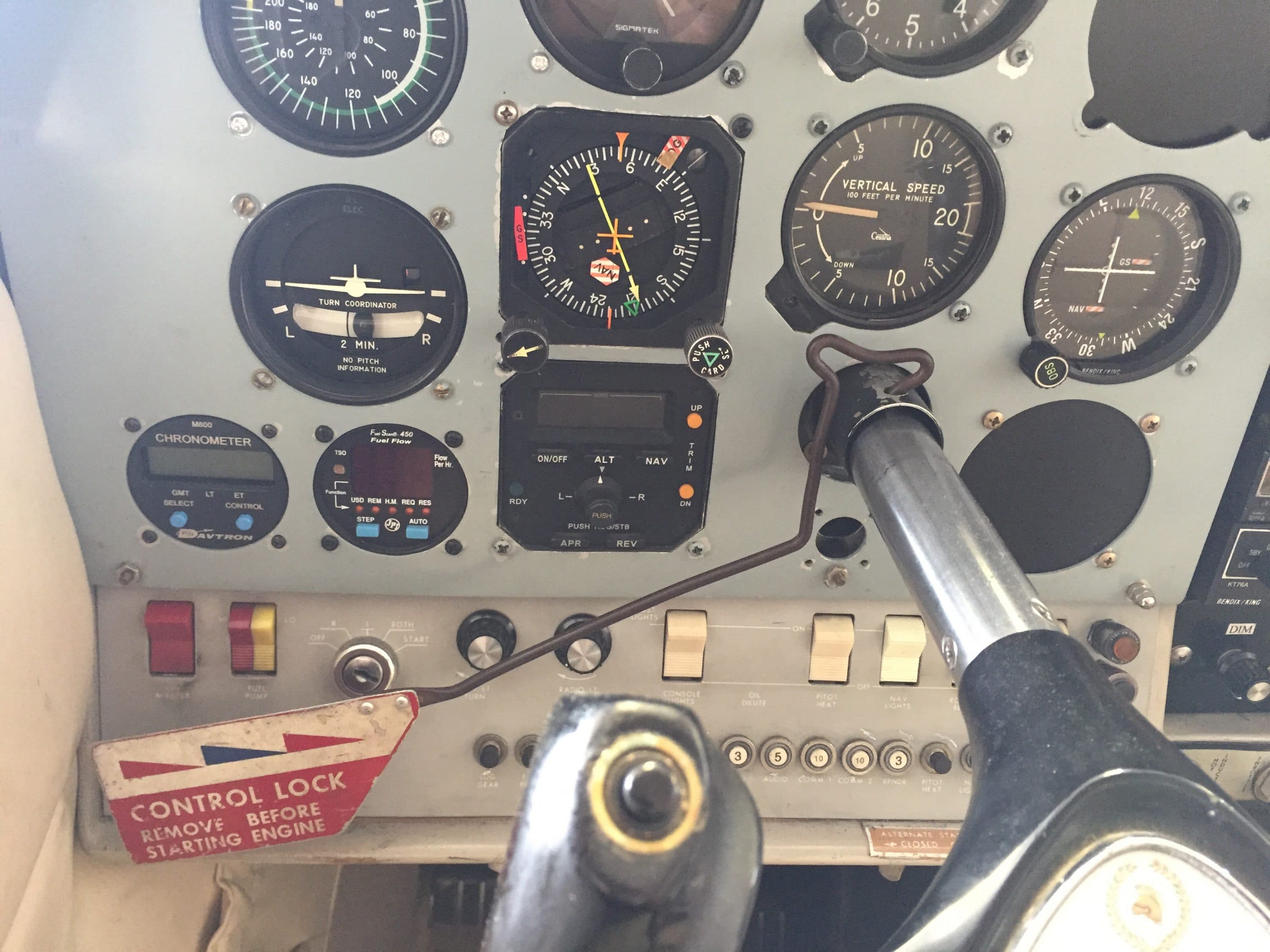 This is the correct control lock with correct labeling. It’s bent a bit and not fully covering the ignition switch and battery master switch, but at least it’s there 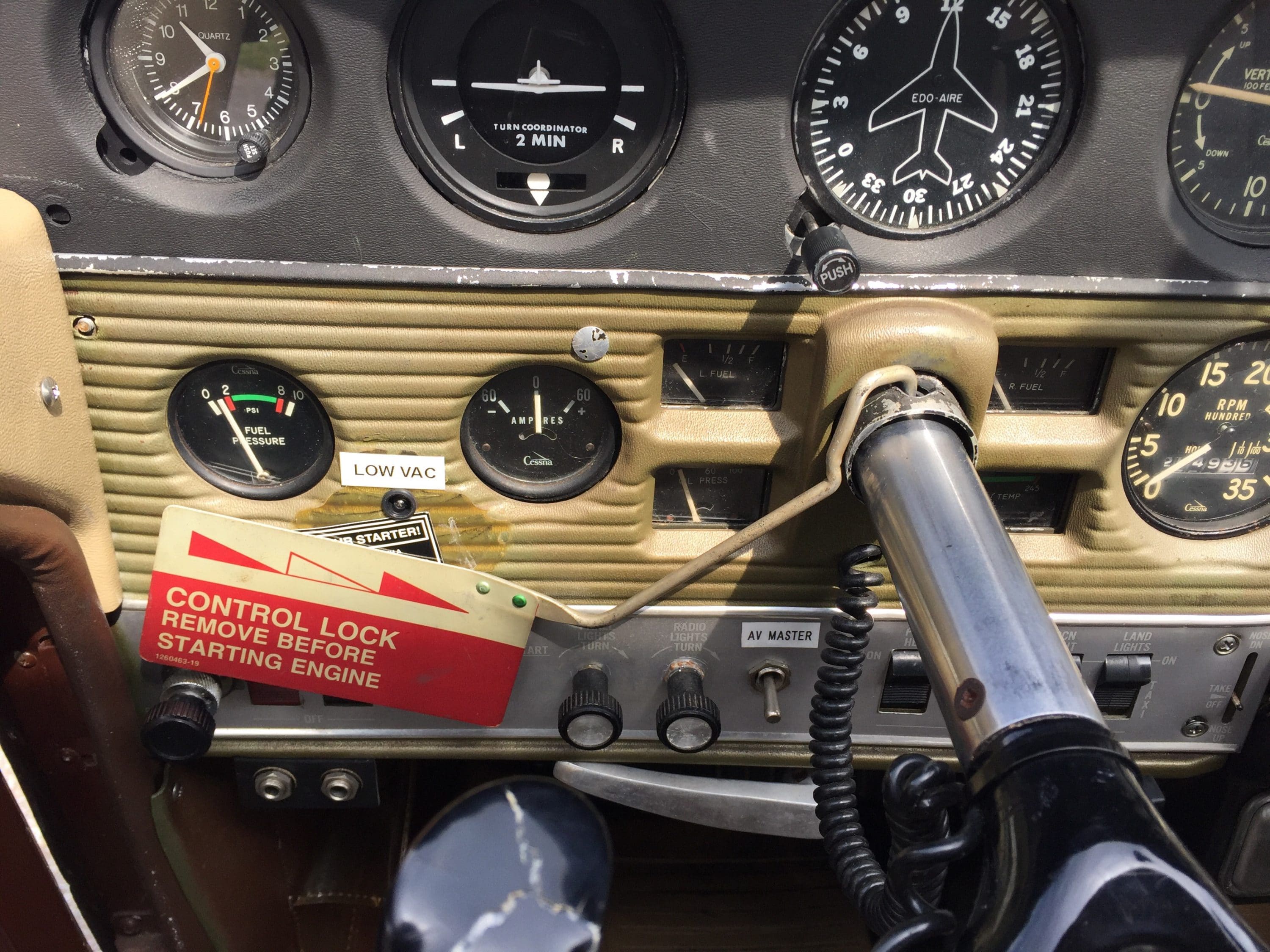 I do strongly agree that installing control locks during aircraft non-use is a must. Just watching what happens when a helicopter air taxis by small planes should be evidence enough for most. The ailerons and elevators violently flop from travel stop to travel stop, putting unknown stress on many parts of the system. One would never know just how bad the damage might be since it may not be detectable during a routine preflight inspection. Certainly not something one wants to discover in flight.

Having said that, I just as strongly recommend against installing whatever is handy as a substitute lock.  The most common substitute we see is a phillips screwdriver. It fits nicely enough but doesn’t hide starting controls to prevent inadvertent aircraft operation.  The worst substitute that arrived in a 210 recently was a very large cotter pin. I only discovered it because I happened to check the flight control movement before taxing the plane from the FBO to the shop.  A non-pilot mechanic might very well have never checked the flight controls for operation prior to moving the plane. 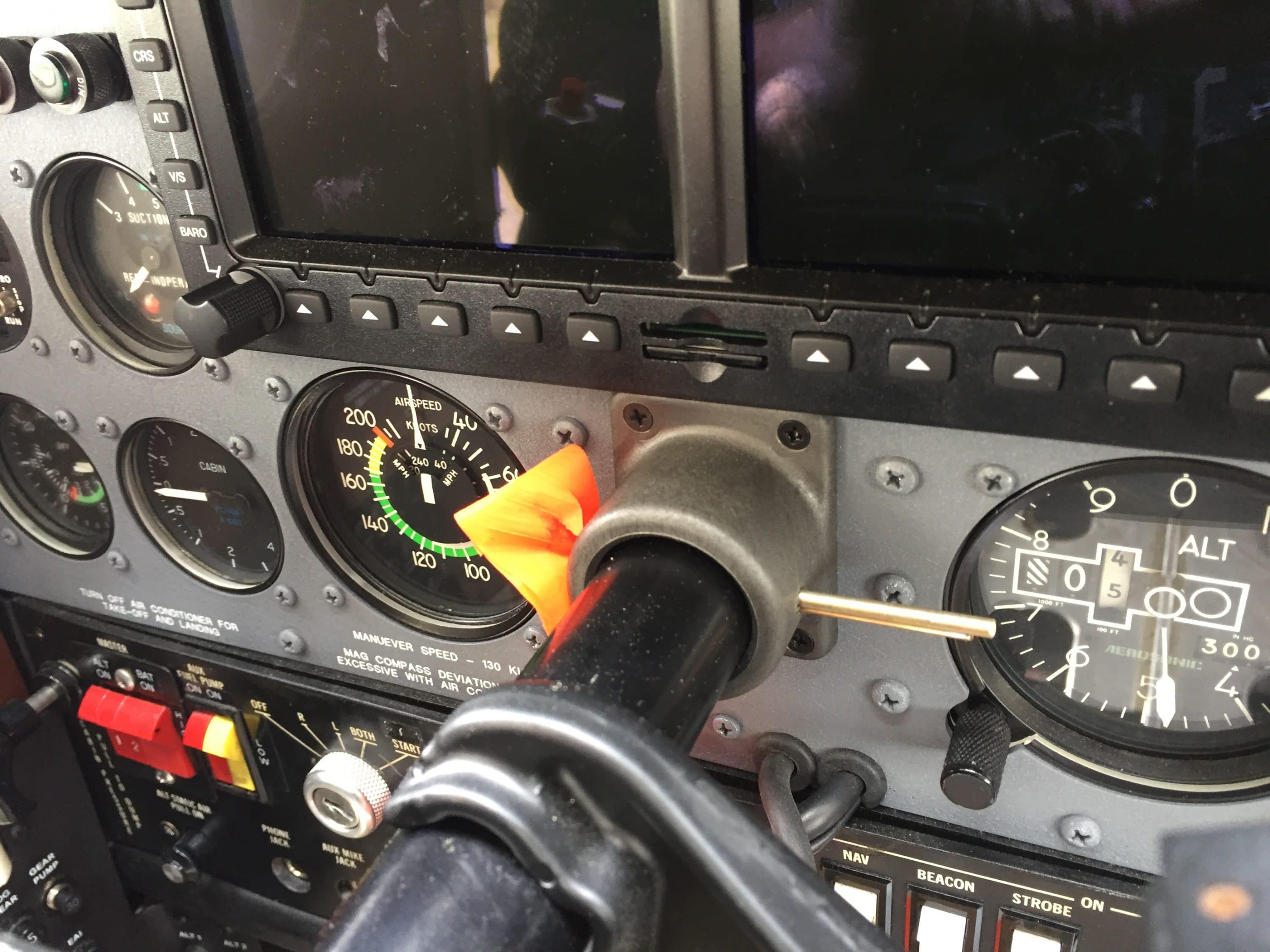 The worst. Without the orange ribbon we added, this large cotter pin was almost invisible

Taking inventory of all the placards is an easy job for any pilot/owner to perform. Once completed, it’ll add a nice sense of fulfillment that yet another detail of your flying life is in order. The next time you’re out at the airport showing your Cessna a little love, have a look at the placards.  All should be in their proper place and legible, even the seemingly minor ones.