As an advocate for RCM (Reliability Centered Maintenance), I believe if there is evidence to confirm that something should be left as it is, then one should leave well enough alone. This should not be confused with, nor is it the same as, “if it ain’t broke don’t fix it”. The decision to take maintenance action should almost always be based on safety of flight or FAA requirement, not on cost. Among the few exceptions are the tail feather mods detailed in SEB88-03 for the 206, 207 and 210 series.

I have the privilege to teach the CPA 210 Systems & Procedures class two or three times every year. Of the twenty to thirty class attendees, ten or more will fly their 210 to class and everyone loves the Saturday afternoon hands on walk around part of class. At this point in the weekend class, we’ve covered all the airframe, flight controls, rigging and landing gear systems so everyone is primed and ready to see what can be found. Usually, everyone stays close as I hit all the high points on the first plane viewed. It isn’t long before others that flew in leave the group and head for their own plane to catch things before I can get to them. The real fun begins when those that didn’t fly in begin running ahead to see if they can find issues on other’s planes. Eventually, I become the spectator watching the class make good use of their new found knowledge.

Out of the ten planes available at least one, and often two, are found with cracks in the horizontal mount bracket. This is a primary structural piece that helps transfer loads from the horizontal stabilizer’s aft spar to the most aft tail cone bulkhead at station 230”. These brackets are easily viewable during pre-flight inspection as well as during CPA class walk around. 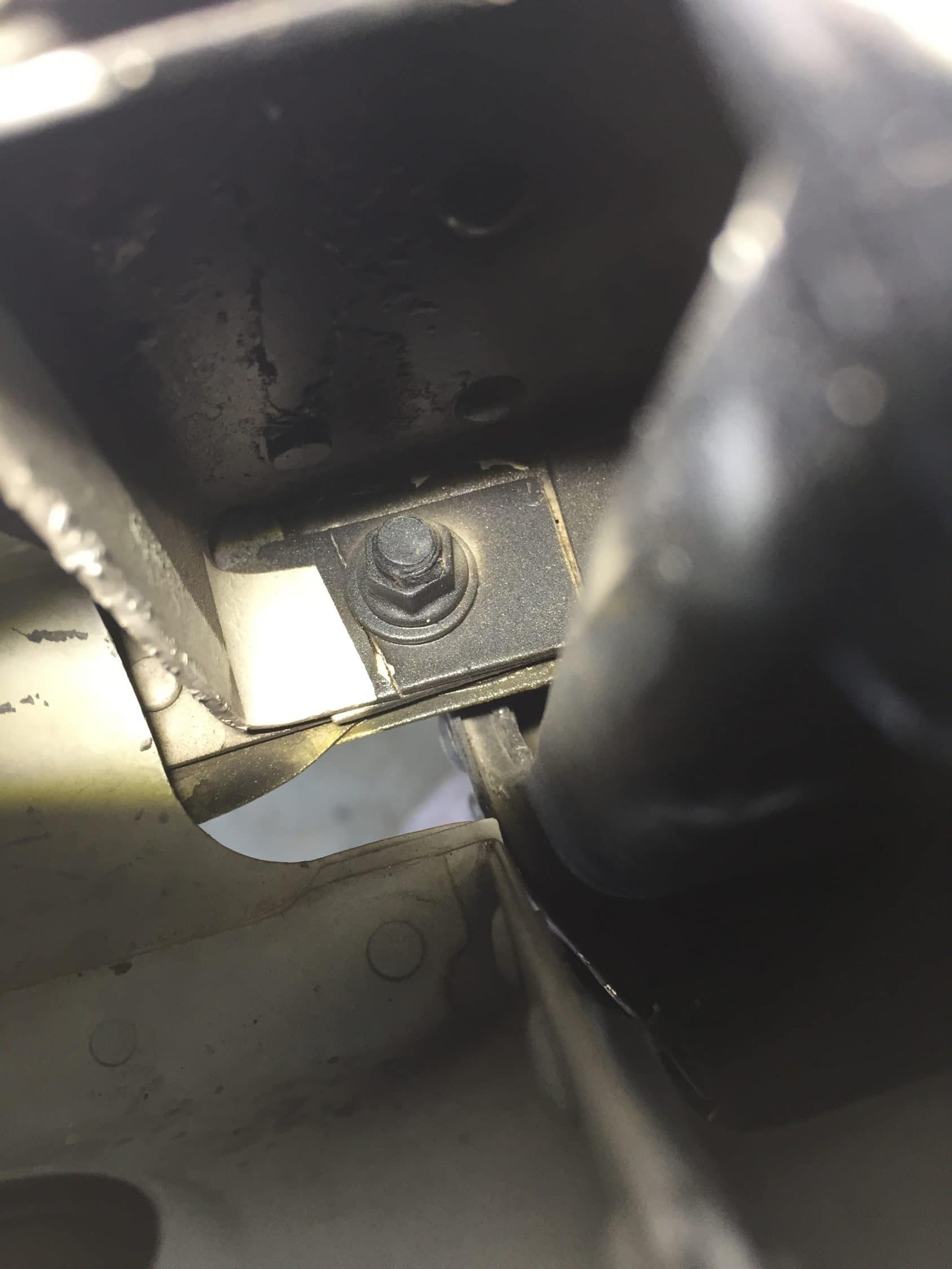 A close up view of a cracked horizontal stabilizer. This perspective is from standing behind the left elevator just beside the rudder looking down at the horizontal aft spar.

Somewhere along the way, Cessna changed the design of the horizontal mount bracket, presumably because so many of the originals were being found with cracks. As it goes many times, the fix needed a fix. Some of the new style brackets lacked critical welds, so Cessna published Service Bulletin SEB00-10 for inspections and replacement of the new brackets. The FAA followed up a couple of years later with AD 2002-07-01 to address the same problem.

SEB00-10 and AD 2002-07-01 were one-time compliance items. However, whenever an old style bracket is found with a crack, the service bulletin is still the place to go for proper method of replacement to the new style bracket.

Replacement of the bracket, or brackets if both left and right are being replaced, requires removal of all the tail feathers. The horizontal doesn’t have to be completely removed, but most mechanics find the riveting is easier when the horizontal is sitting on a shop table.

The entire process is a major invasion into the rigging and operation of the elevators, elevator trim and rudder. Absolutely a surgery that one should avoid if possible. These brackets are not repairable so replacement is the only option. 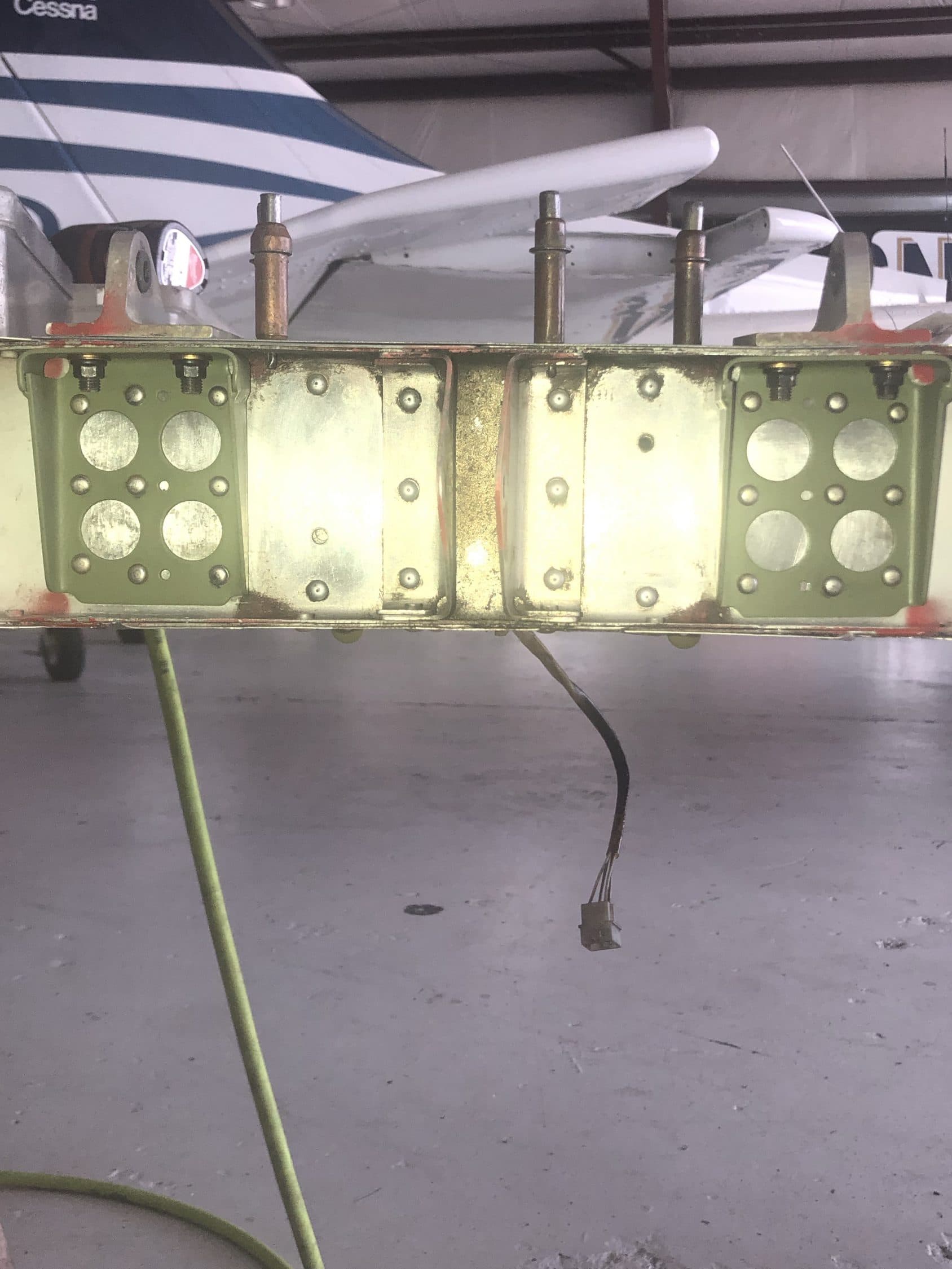 The horizontal is removed and laying upside down for working. The green colored pieces on the aft spar are the new style brackets installed.

Because removing the tail feathers is so invasive and risk of post maintenance problems being so high, this is one of the few times when doing a little more maintenance is well worth the effort.  Cessna service bulletin SEB88-03 recommends installing two service kits at the tail cone bulkhead at station 209”.  The kits are SK210-125 and SK210-126.

SK210-125 serves to enlarge the surface area for the stress applied to the tail bulkhead at station 209 where the horizontal stabilizer forward mount bolts attach. The original bulkhead reinforcements are two long narrow aluminum strips riveted to the aft side of the bulkhead. The -125 kit installs shorter and wider reinforcements, but more importantly adds similar sized reinforcements on the forward side of the bulkhead. This effectively sandwiches the bulkhead and protects it from the stresses that cause very expensive cracks – the prime reason for the kit.

SK210-126 replaces the forged stabilator forward attach fittings with machined pieces. There isn’t any clear evidence of failure of the original fittings, but there are plenty of examples of failures of the five rivets that attach the original fittings. We inspect these rivets routinely for corrosion and security. The true value in this kit is the installation of new rivets. The fittings aren’t very expensive, so be sure to install them even if it may just be the new rivets that are needed. 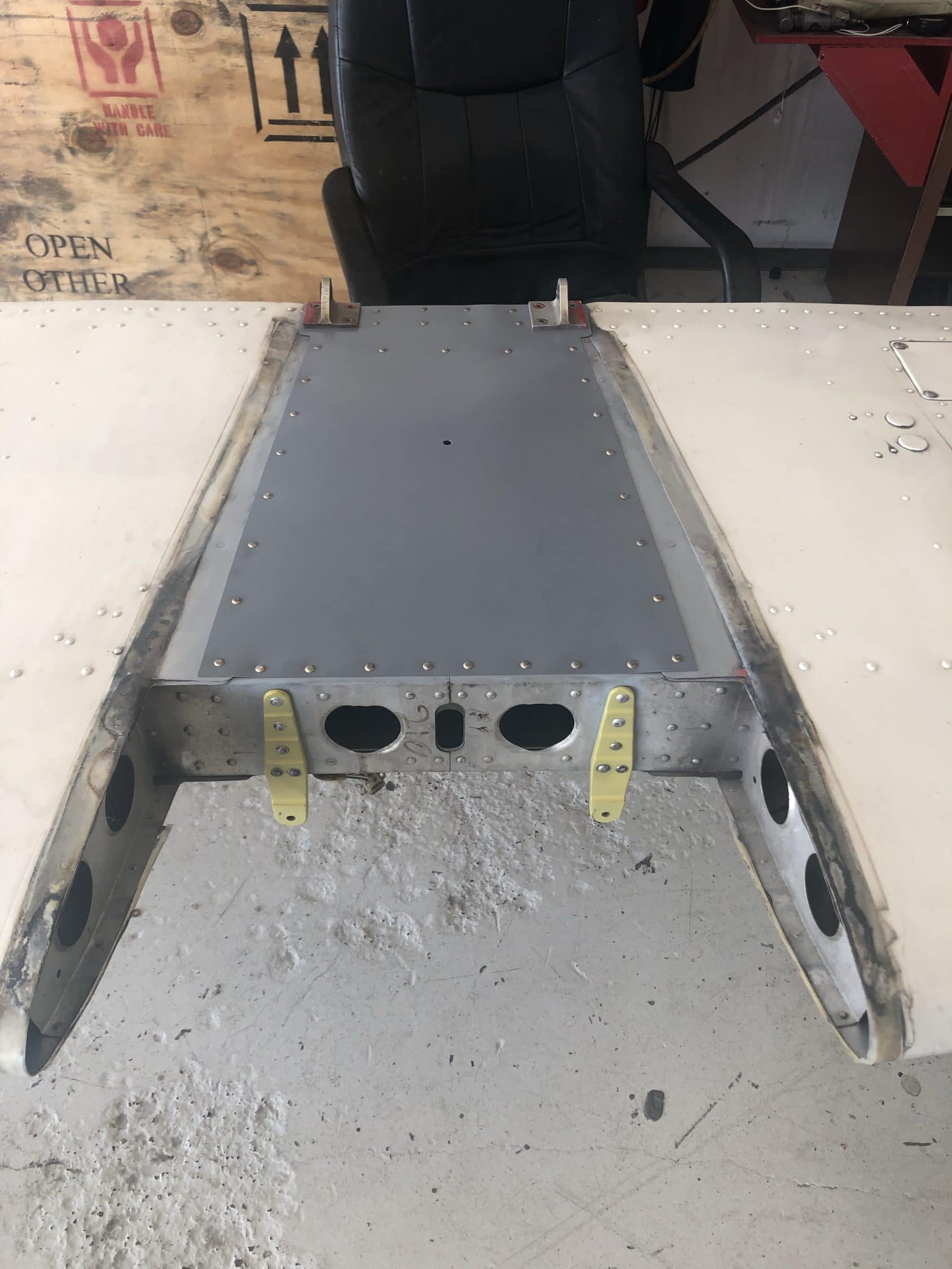 The new style horizontal mount fittings installed. The horizontal is laying upside down in the photo. When on the plane, the two fittings extend above the horizontal.

When purchasing either of these two kits, actually consider not purchasing the kits. Instead, just order the specific piece parts for a significant cost savings. Textron charges a premium for collecting all the individual pieces, parts, hardware and putting in a plastic bag to create the kit. Any shop/mechanic that agrees to perform this work has all the hardware listed in the kits in their inventory.

The locator bar included in the -126 kit is just a spacing tool for the fittings. Fabricating one, instead of purchasing it from Textron, is as simple and easy as it gets. A scrap piece of aluminum, or steel or whatever is handy, can be clamped to the old fittings and drilled to match the bolt mounting holes. The same scrap tool is then used to position the new fittings when they get riveted to the horizontal.

The normal labor hours to perform both kits is about thirty-two man hours which includes removing and replacing all the tail feathers. However, if the tail feathers are already off for the horizontal mount bracket, the job is well past halfway done. 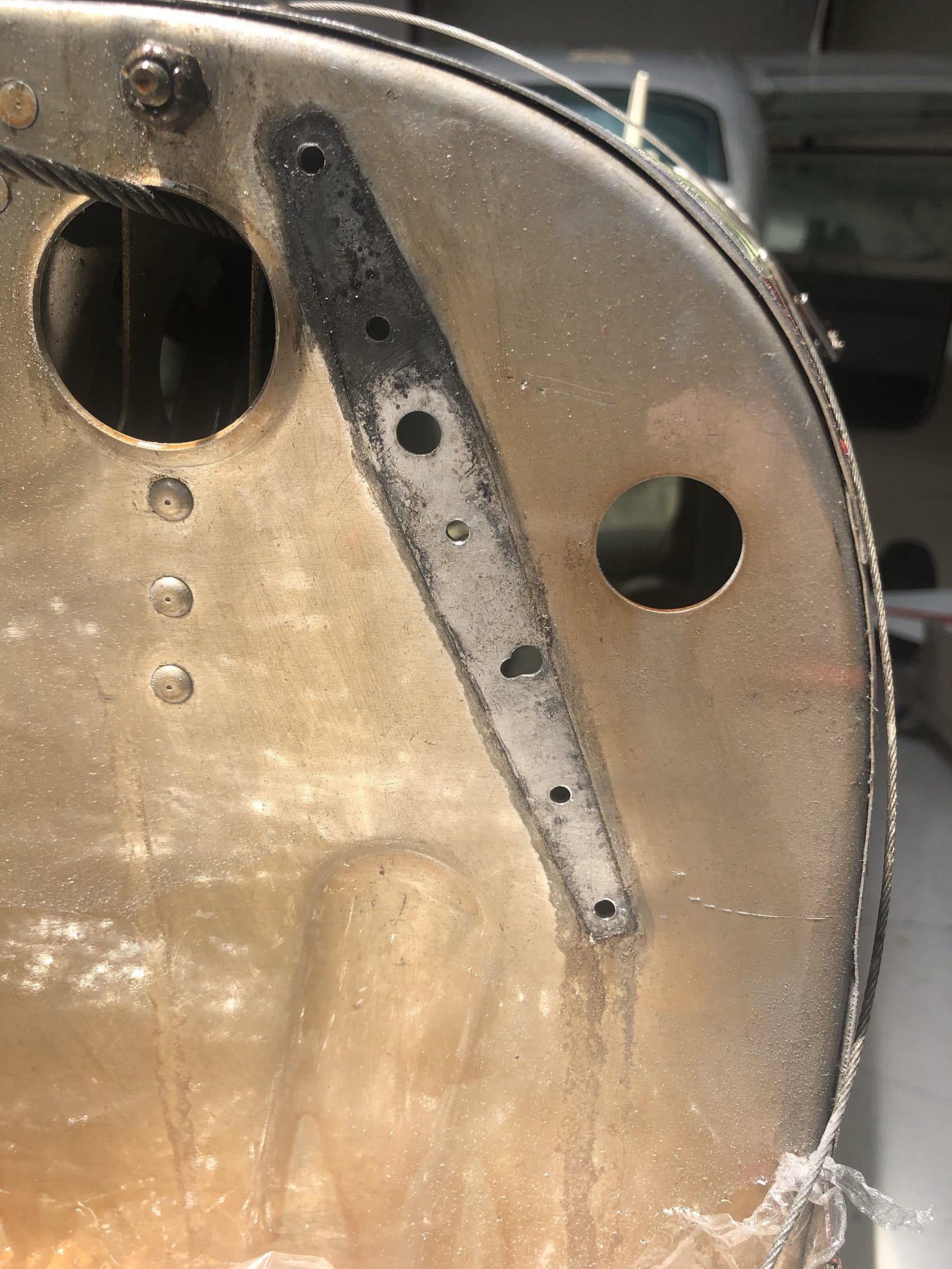 With the tail feathers removed, this is a view, looking forward, at the aft side of the 209″ bulkhead. The long skinny original reinforcement has been removed. The rivet hole pattern as well as the oddly placed manufacturing alignment hole can be seen.

The major risk in all of this work is in removing and reinstalling the tail feathers. Just that part includes plenty of opportunities to get something wrong. The tail flight controls aren’t just tampered with; they are completely removed and all the control cables taken out to the 209 bulkhead. Reinstallation requires routing cables, installing pulleys, sprockets, bell cranks, not to mention rigging and getting all the controls back in their proper operation and limits. I would never recommend such major surgery unless benefits outweigh the risk, or if the risk was somehow required. 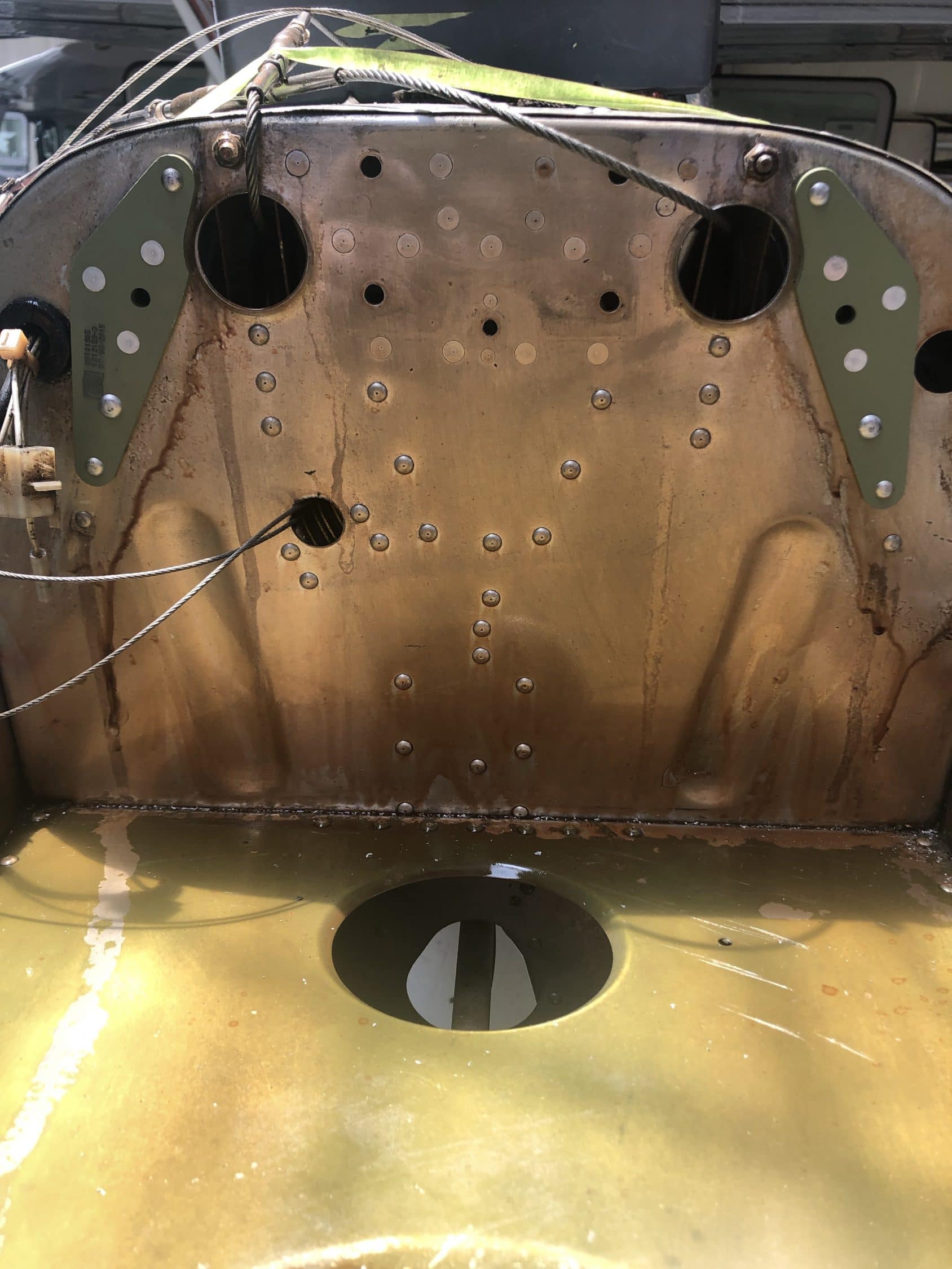 The new style shorter but wider 209″ bulkhead reinforcements installed. Identical versions are on the front side of the 209

Since a failed bracket forces removal of the tail feathers, it makes good sense to perform other simple maintenance items at the same time, making the most of the situation.  Installation of kits -125 and -126 are such simple modifications that performing them during this event is an obvious scale of economy.  Just a few rivets are removed but no extra controls, wiring or any other system. These are about as benign a modification as can be performed, if the tail feathers are already removed.

Unfortunately, none of this work makes the plane fly better, faster or look any different at all. There is the comfort of knowing that future cracks in the 209 bulkhead are likely averted. The forward attach fittings are the newest style and, most importantly, have new mounting rivets. These are very important future safety items.

If the safety aspect doesn’t get your attention, maybe the economic side will. Adding these modifications is very low cost, in aviation terms. The money benefit won’t come around until that eventual day comes to sell the plane. For any 200 Series knowledgeable owner or pre-buy mechanic, these mods are well known and a high value to any buyer. While economics shouldn’t drive airworthiness decisions, in this case, finance definitely helps guide one to the best long term safe flight outcome.