It’s around Halloween season, so a scary story is in order. The worst fear is “that thing” jumping out unexpectedly from behind a door or tombstone.  A very small change in the past would usually serve to avoid the entire event. Aircraft owners find themselves in the same situation in some respects. Just a simple inspection or better maintenance decision early on would avoid some current, very scary and expensive, structural disaster.

There are several excellent examples where Cessna glued something together thirty plus years ago and the ill effects didn’t present until many years later. There are the lead sound deadening panels glued to the cabin skins. There’s also the 210 original elevator trailing edges, filled with foam which is bonded in place as a substitute for riveted ribs. The big news these days is the recently issued bulletin for the 210 carry through spar due, in part, to corrosion on its lower surface where an upholstery padding is glued.

Many owners have expressed concern that Cessna didn’t foresee the problems the glue and moisture would eventually cause. Hindsight is so much more revealing and should provide cautionary tales. From time to time, I see issues on customers’ planes that are so easily avoidable had the owner and/or previous maintenance provider learned from the now well- known errors of the manufacturers.

A new customer arrives with his newly purchased early 1960s model 182 for an owner assisted annual inspection. He knows his “new” airplane well and points out several items during the initial walk around tour.  Of note is the lift struts which have black leading edge tape applied. The horizontal stabilizer has the typical rubber protector boot bonded to the leading edge. At first glance all looks fine.

The tape on the lift struts gets my attention first as it isn’t standard installation. The lift struts are hollow tubes with the visible surface being the structure. Anything that covers such important primary structure becomes suspect as a cover up.  The tape isn’t in great shape and serves no function so the decision is made to remove it. Once removed, we can see the original paint layer but no structural issues. The owner gives a sigh of relief and will soon begin prepping the struts for new paint.

Our attention turns to the horizontal stabilizer with the rubber leading edge boot. It’s obvious that  the edge is disbonded in several places. Some of the disbonded areas are bulged a bit where someone injected new adhesive in an attempt to reconnect the boot. The most concerning discovery is corrosion working under the paint from the edges of the boot. The corrosion is a very bad sign and indicates more bad news may be lurking under the boot. 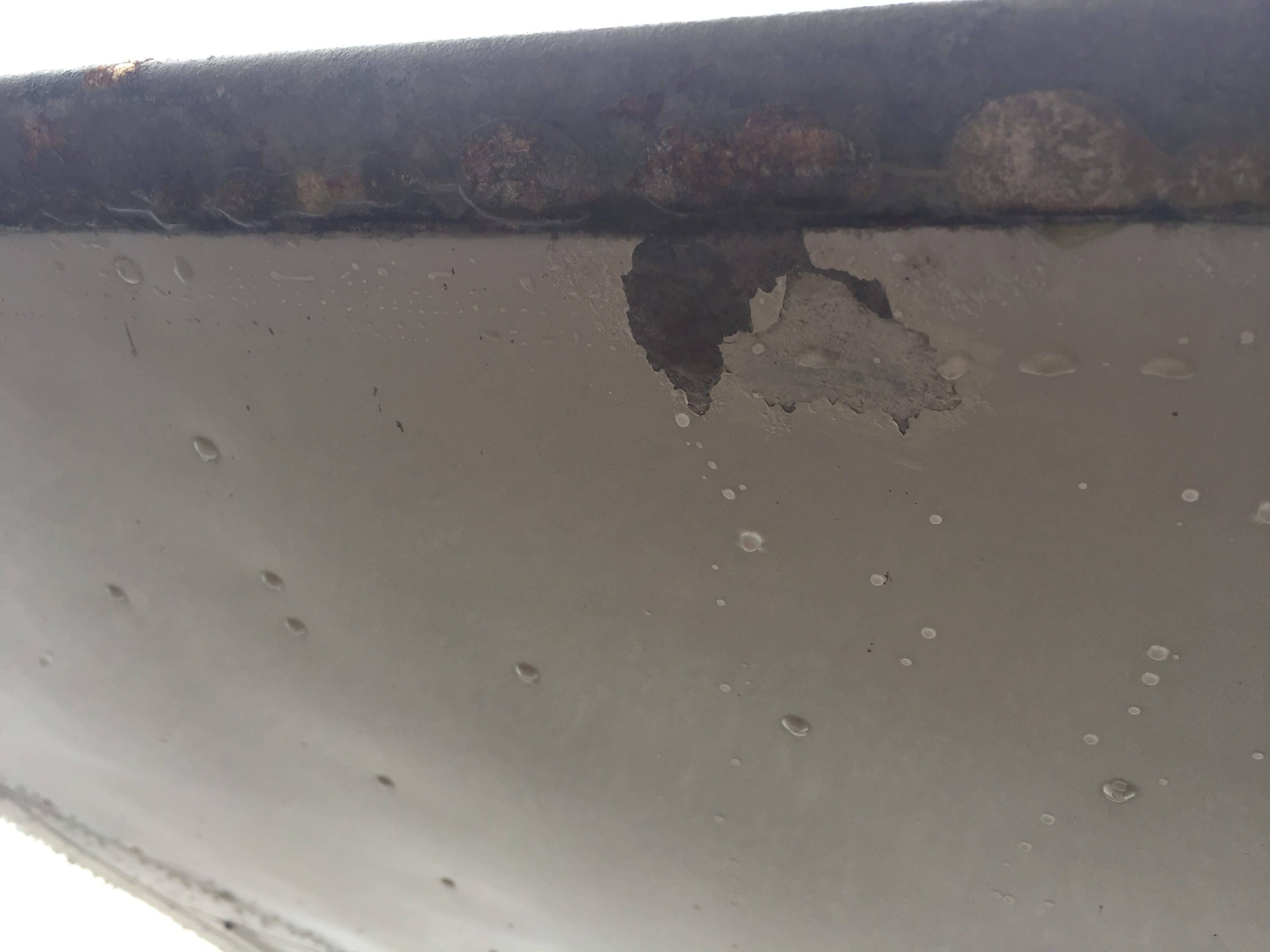 The horizontal lower surface showing one of the areas where corrosion made its way out from under the boot blistering the paint.

The decision is made that the boot must be removed to see what horror lies beneath. The boot is old and dry rotted, so it is an easy call to pull it off.  With every inch of boot removal, the horror is increasingly escalated. Not only do we find patches of corrosion, but rather nearly the entire leading edge is heavily corroded. 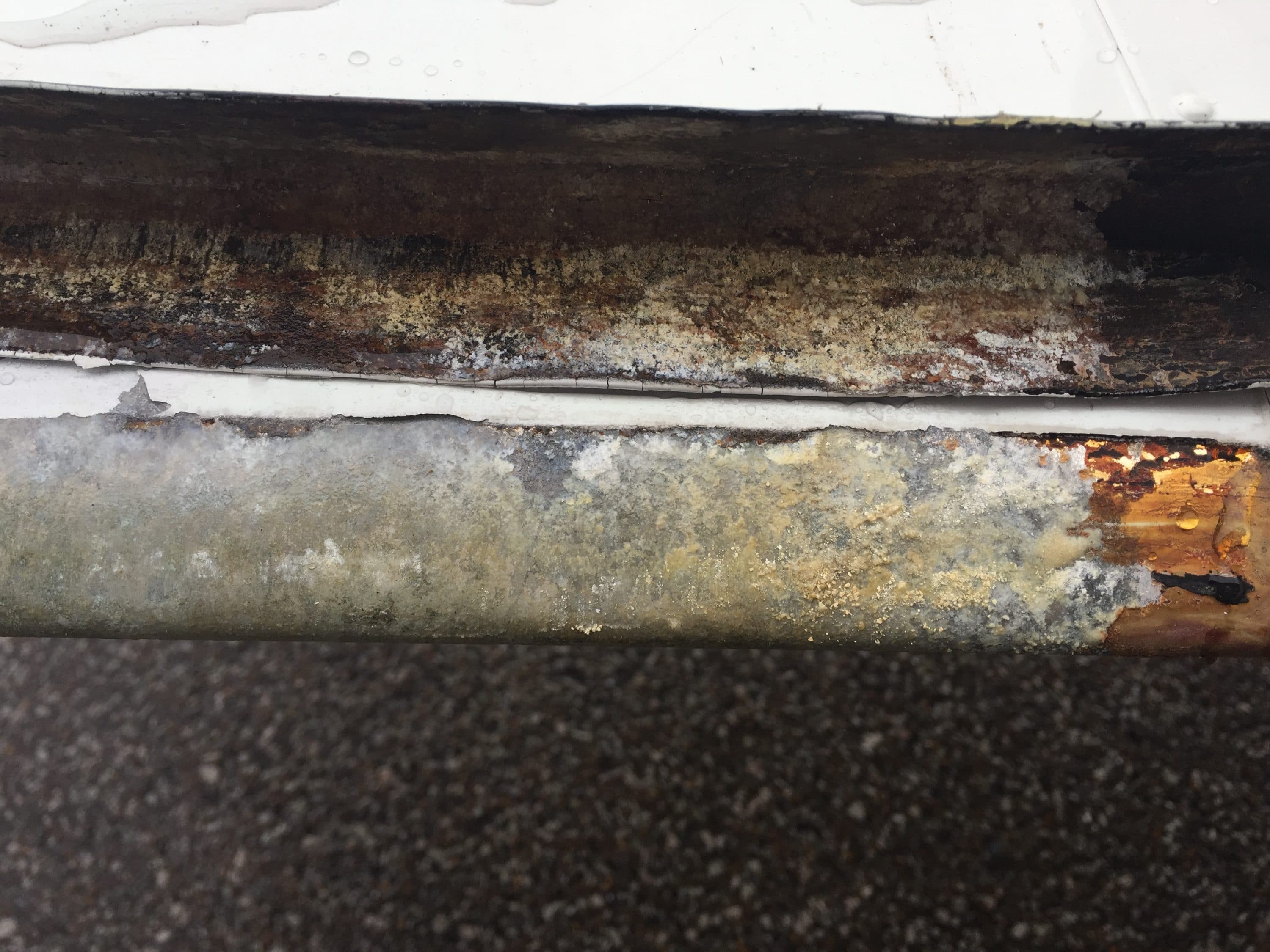 A close up of one area of the corrosion found hidden under the rubber boot.

Further inspection reveals the corrosion pitting depth exceeds 50% of the thickness of the skin. The general rule of thumb is that no more than 10% of a material’s thickness can be lost if that skin is to remain in service. In this case, the extensive damage condemns all four skins on the horizontal. This is a major repair effort. 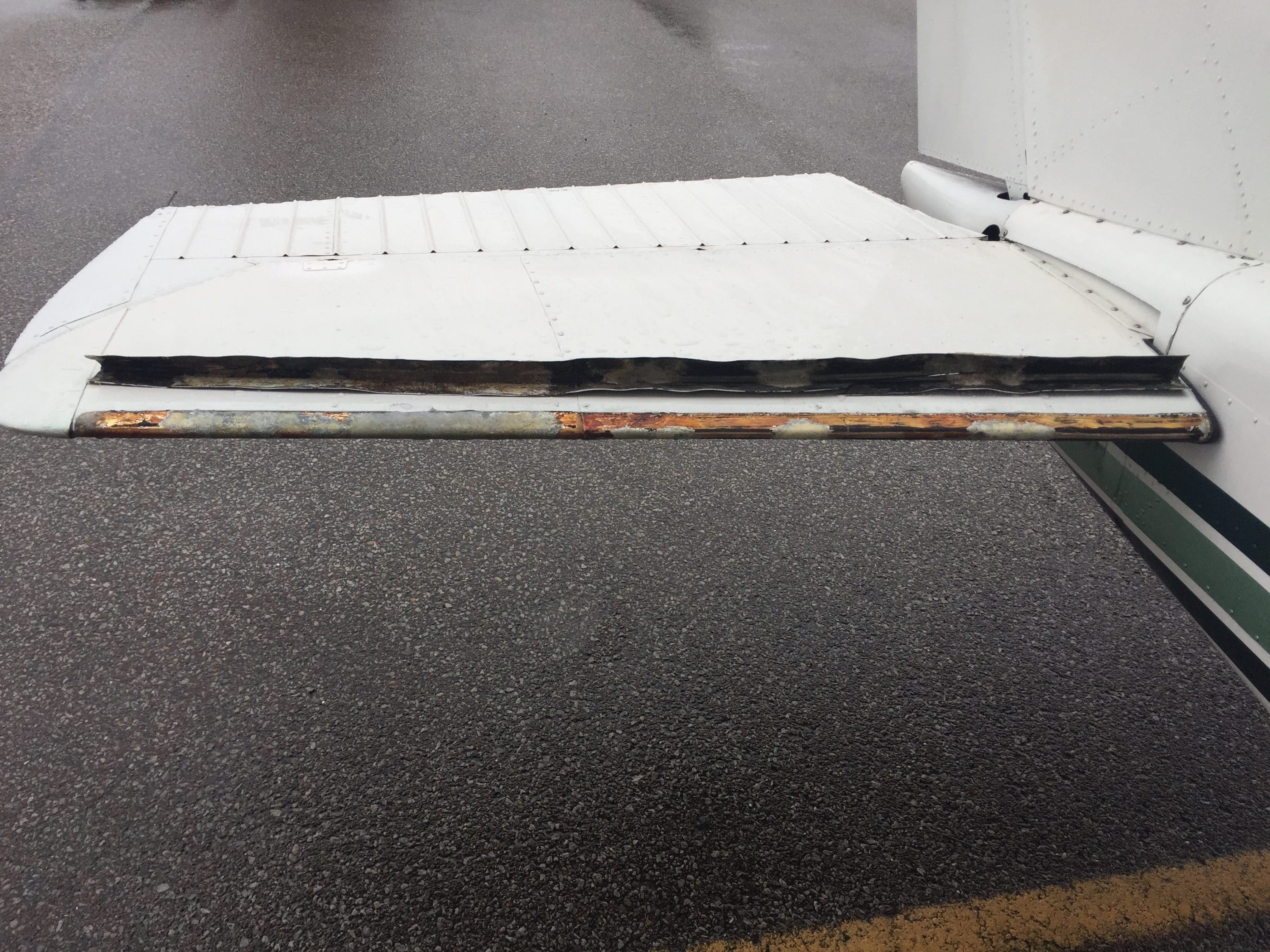 An overview of the right horizontal stabilizer with the removed rubber leading edge boot laying on top.

The horizontal repair requires placing the unit in an alignment fixture while the skins are removed and new ones riveted on. Of course, that means the horizontal must be removed from the plane which also means removing the elevators, vertical fin, and rudder.  Removal and reinstallation alone is about twenty-two man hours. Typical repair of the horizontal costs somewhere between $4K and $6K sans painting. Not the financial surprise one is happy to have.

Our owner is very resourceful, spending the necessary time researching the internet for any serviceable part available. Another scary reality is that parts for old airplanes can be really hard to find. Ebay, Google, Bing and every imaginable aviation online parts site are searched for the horizontal stabilizer availability with nothing found. Desperation sets in, so he resorts to actual phone calls to a list of aircraft salvage yards. As it turns out, one facility happens to have a serviceable horizontal that isn’t in their inventory yet.

All said and done, the entire repair isn’t a total nightmare. A suitable part is found and the labor is manageable in part because the owner assists with the work. It would be nice if repairs to a 1961 model airplane could be paid in 1961 dollar amounts. The bad dream is that this repair on that fifty-eight year old airplane costs the very same as the identical repair on a 2019 model.

What concerns me more than the cost and inconvenience to the owner is how easily the entire issue could have been avoided. Had someone been paying closer attention during annual inspections, the disbonding could have been corrected before corrosion started. Corrosion typically moves fairly slowly.  It can be noted when the problem is easily mitigated and before the damage is too extreme.

Maintaining legacy airplanes requires a particular mindset that isn’t as common as owners might think. This mindset includes being very suspicious of any evidence of corrosion and knowing the specific airframe well enough to know the corrosion hot spots. It also means one must be very proactive with preventive measures which rarely require much effort or cost. Let’s make every effort to avoid any sequel to these scary stories.