The other brand C aircraft manufacturer has been installing parachutes in their planes since first production. It hasn’t been without some controversy along the way. Many debate the whys, whens and where one should pull the chute. Others claim having the option encourages less stringent “hands on” flight training. Still others suggest a parachute emboldens a pilot to venture farther into bad situations. Spoiler alert, I’m not going to venture down any of these paths. I’m a very nonconfrontational sort of guy, so I’m going to skip all that and just give a few pointers about the installation and use of the BRS parachute in a Cessna 182.

During the planning stage one should figure on forty-five to fifty-five man hours for the install. One obscure prerequisite for this STC installation is for rear seat shoulder restraints. Most, but certainly not all, of the 182 production included hard points for the shoulder harness mount. No worries if one isn’t there; the BRS installation kit includes the needed side wall mounts with rear shoulder harness hard points. One will need to source the rear seat restraints if the plane isn’t already equipped. Cessna actually has a service kit for this, but inventory is slim and they are not inertial reel type.

A good deal of the work includes cosmetics. The aircraft owner needs to keep this in mind when choosing the shop for the installation. The mechanic should be one that has an eye toward those details. Not everything in the installation instructions is completely clear cut. A little common sense is required with a good dose of arts and crafts. Some holes will be cut in the cabin top structural skin near the forward wing attach points, so the appropriate mindset will be to measure, check, measure and check again before cutting. Similarly, a hole gets cut in the acrylic aft window which can suddenly crack if the technician doesn’t use the proper cutting tool or gets in a hurry. 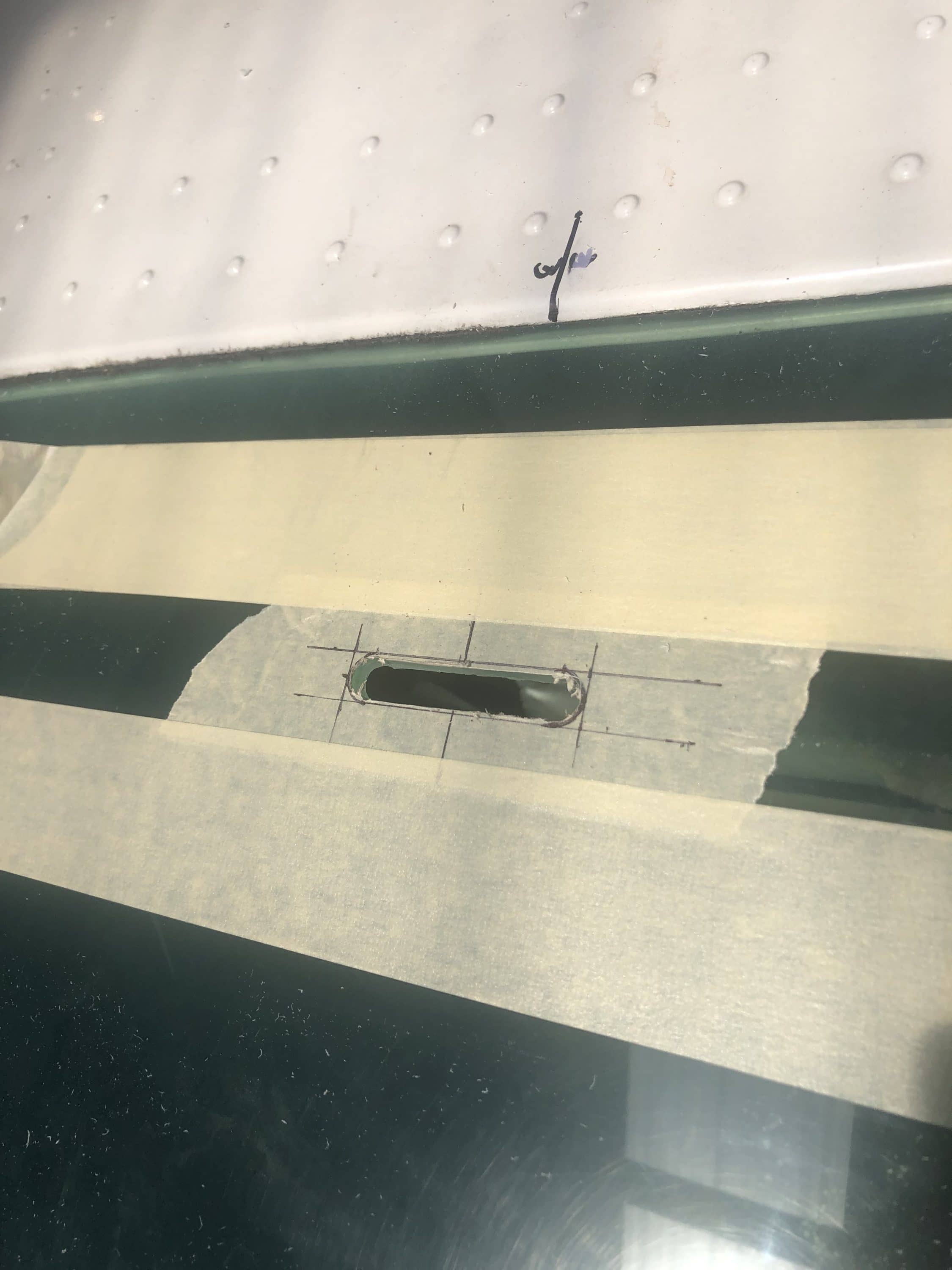 The kit arrives in three separate boxes; one contains the pyrotechnics and will ship as Hazmat. Read that as extra $$$. As with any project, everything should be laid out and closely inventoried from the start. This not only serves to confirm what was shipped but also to acquaint the installer with all the components involved.

Complete compliance with the installation instructions include mandatory photographs of various completed stages to be reported back to the STC holder. We’ve never seen this requirement in an STC kit before but it seems a perfectly logical requirement. The STC holder gets some confidence that the most important points have been completed correctly and with documentation to prove it. Consider it a remote version of an inspection department, if you will. This not only forces installers to more closely follow instructions but means the instructions must be very complete and detailed. 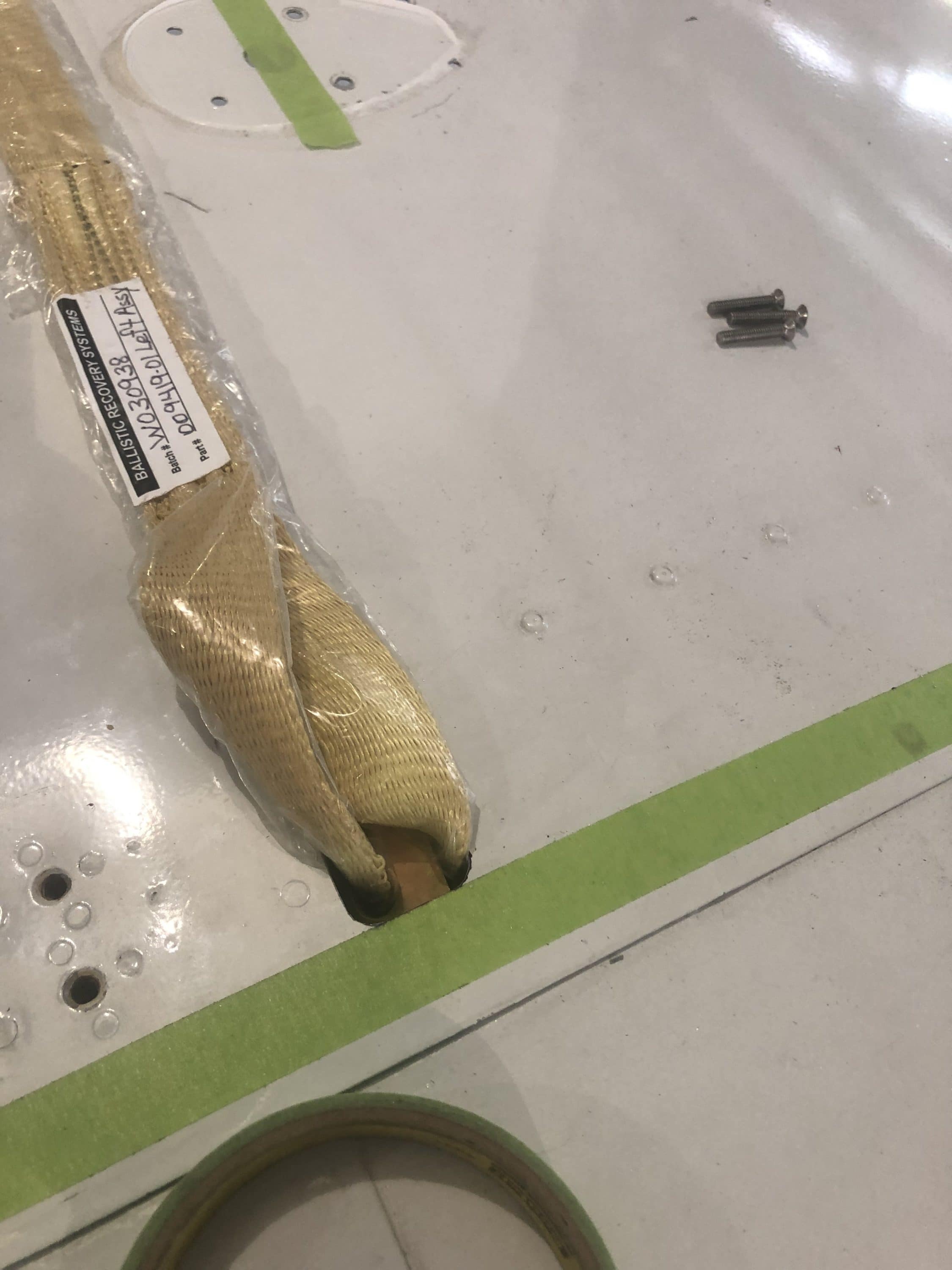 Holes cut in the cabin top skin for strap attachment to the forward wing attachment bolts. 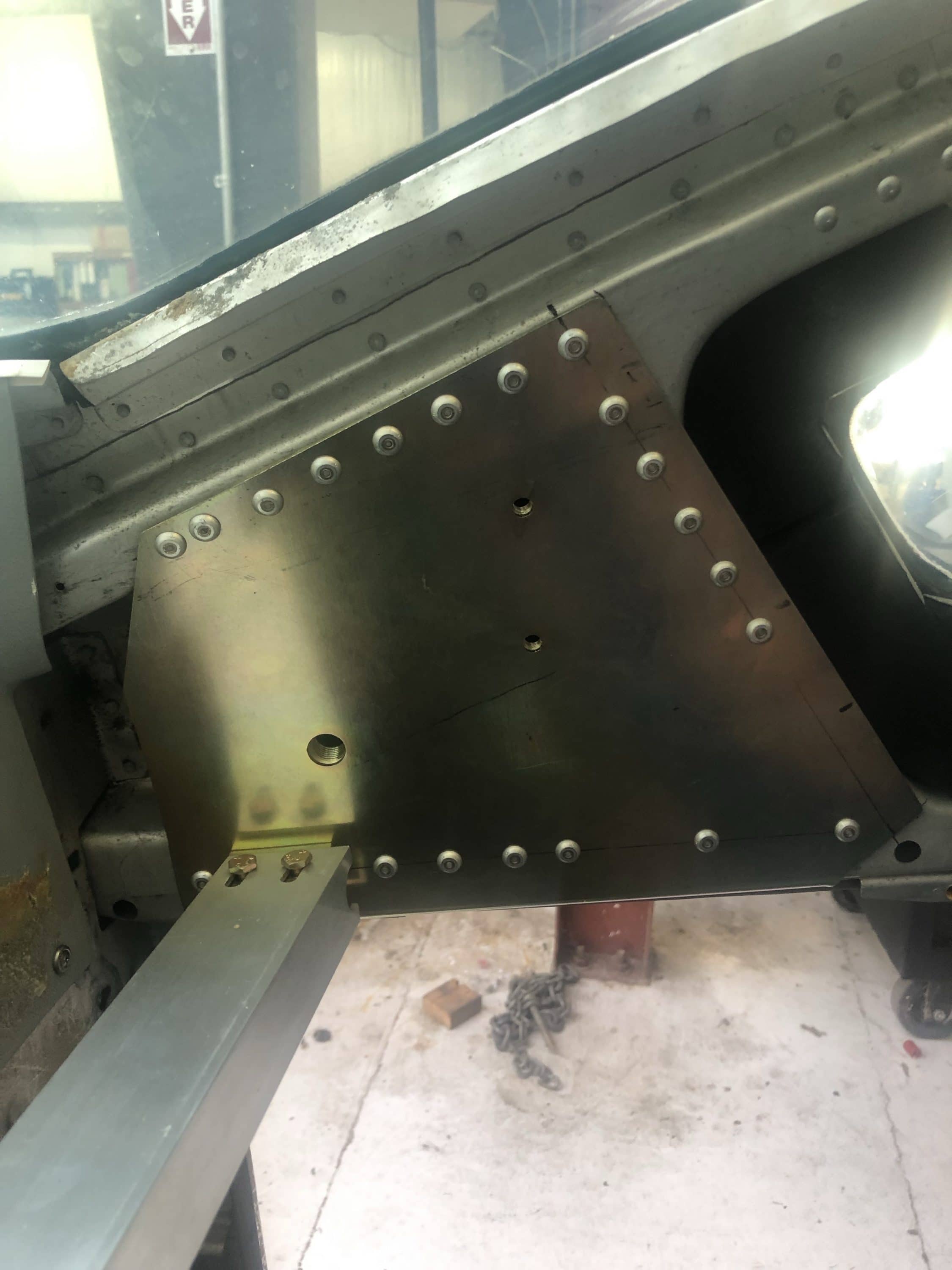 New plates mounted just aft of the cabin side windows for BRS structural attachment as well as back seat shoulder harness mount.

The most unsettling part of the process is the handling and installation of the ballistics. At one point in the instructions, the propellent capsule gets mounted into a holder. It should just slide in without preference to one end or the other. We found that the capsule didn’t slide all the way in, as it should, so we considered just giving it a good hard push. That thought came and went quickly. On a whim, we reinstalled the capsule with the opposite end first and it slid right into place. We all gave a quiet sigh of relief. I’m just sayin’, no need to ever force anything that could go “BANG”. 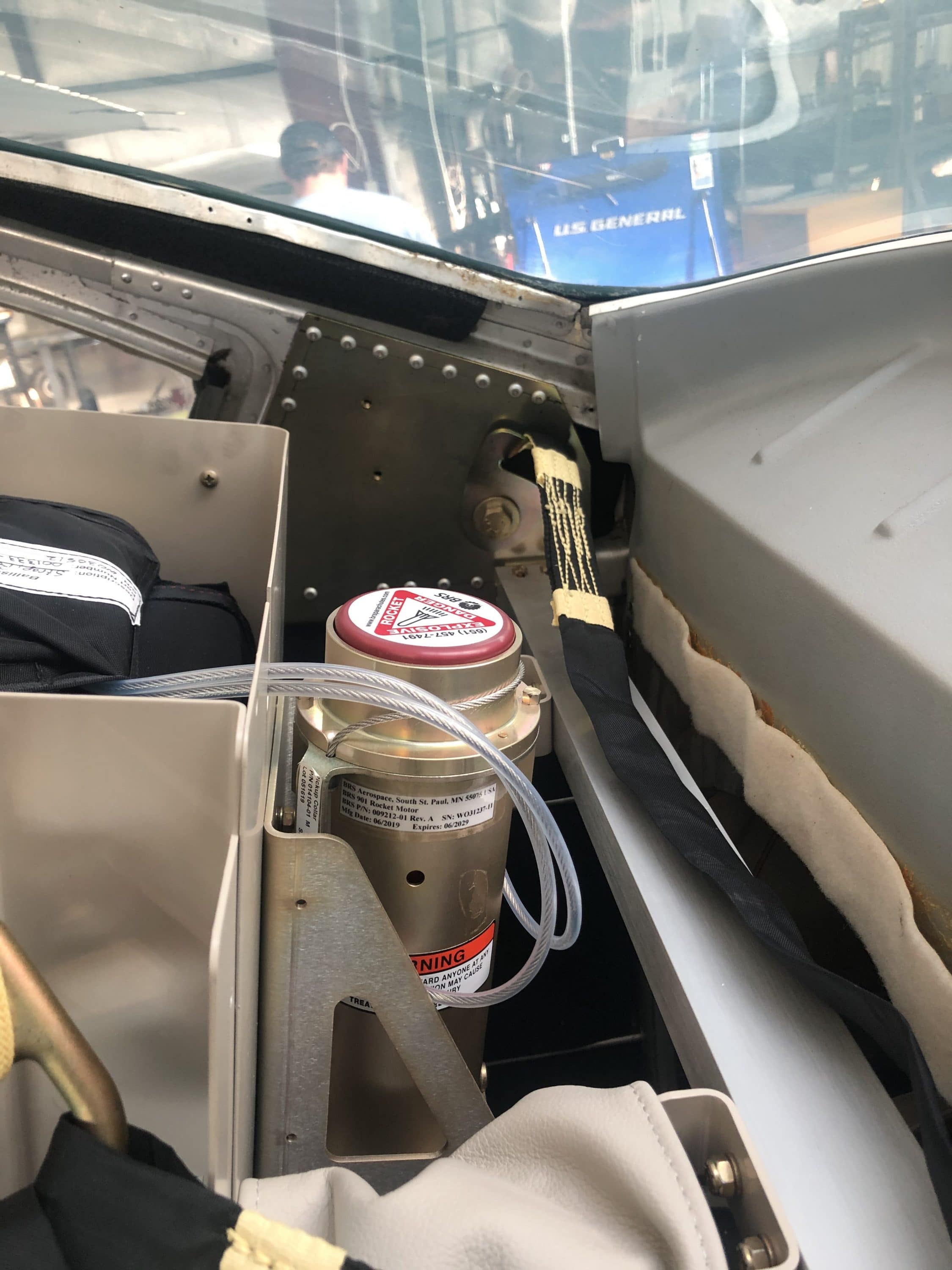 Should be perfectly safe but we still spoke softly and tip toed around it.

The completed assembly will consume about 1/3 of the baggage area. It sits almost all the way toward the right side, which helps. This isn’t so bad in the newer planes with the extended aft baggage area.

The total added weight is about seventy pounds which equals just under twelve gallons of Avgas. That may seem like a lot until one considers that many 182 owners fly around with extra weight in the baggage area for ballast. With a BRS installed, those not so useful ballast weights can be left at the hangar.

The parachute box mounts against the rear seat backs which inhibits reclining. The rear seats are seldom used by most owners, so this won’t be a significant concern to most. 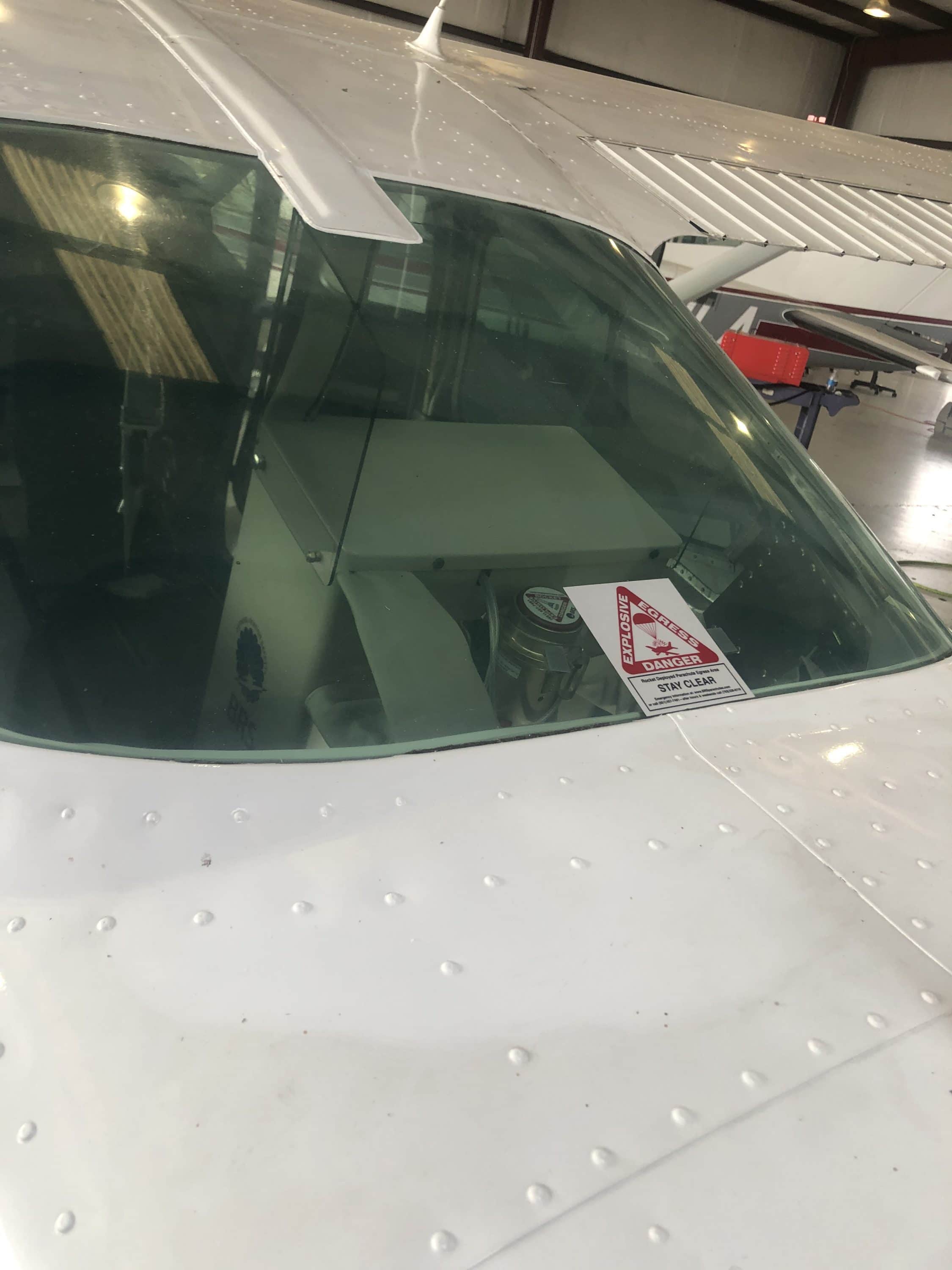 The placard is part advertisement and part safety caution.

It is doubtful that many 182 owners have had training as to when to make the pull, so serious study and soul searching is in order. It’s difficult to overcome many years of flight training with no chute. One must have a go no-go decision tree for a chute pull. The other brand C company has made, and continues to invest in, detailed and systematic training for when and how one makes the pull. It’s a simple thing to pull the handle, but the decision to pull goes against primacy training.

It is important to have a complete understanding under what flight situations the chute can be successfully pulled for proper inflation of the envelope. The considerations include forward speed and altitude. In a nutshell, if airspeed is very low, more altitude is needed for a good pull.

A pull during initial climb requires the shortest decision time allowance, so this scenario requires some predetermined procedures. The pilot should know the lowest altitude and speed at which a chute pull will be successful. Any problems before achieving that decision point would be a straight ahead landing as best can be done under the circumstances. From that initial available pull point to about 2000 feet AGL, the chute can be pulled, but the decision should be almost immediate. Above 2000 feet AGL there is usually time to consider a few options.

A parachute makes perfect sense if used properly. If one doesn’t have the redundancy of a second engine or the reliability of a turbine engine, why not build in some other option in case one’s situation goes down the drain?

Once the chute is deployed, the pilot basically gives up control of the plane. Prevailing winds will determine in what direction the plane floats and what its forward speed will be at landing. There will be significant vertical speed at impact which is absorbed by the landing gear at touchdown. A water landing eliminates that nice cushion from the gear.

A landing on a road, parking lot or other public space has some risk to those on the ground. Because the landing zone is much smaller in these vertical landings than in a gliding landing, there is a much lower probability for collateral damage.

Dropping into trees or buildings seems like it would be a scary event. The experience in these situations from the other brand C airplane actual chute pulls suggest it won’t be pretty, but personal injury will be at a minimum.

I’ve spent a lifetime being trained how to handle various in-flight emergencies. One of the scariest is an engine failure requiring a dead stick landing into unknown territory. Fortunately, I’ve never had an off airport landing, but I’ve recovered lots of planes that did. With few exceptions, the airplane is seriously damaged. The occupants often escape serious injury, but it’s no guarantee.

I received factory approved, insurance required, initial transition training in the other brand C aircraft earlier this year. The instructor was very experienced in stick and rudder training which he specialized in his Decathlon. A major part of the instruction related to the when, where and why of a chute pull.

The revelation moment for my buy-in to the parachute came during the second take off departure. At 500’ AGL my instructor asked what I would do if the engine failed (as he pulled the throttle to idle). There wasn’t enough runway ahead of us to land there and too low to attempt any sort of turn back to the runway behind us. My decision was to land in a very nice field just ahead.

I expected my instructor to challenge my choice to land instead of pulling the chute. Instead, he challenged my assessment of the field. As we descended, he began to point out the many obstacles that came into view. The field wasn’t flat at all, but rather short rolling hills that had been plowed. There were large ditches crossing in the area where we’d be landing. After all that, the power lines presented themselves.

As we applied power to climb away from the potential disaster, the reality of the situation began to sink in. Assuming I missed the power lines, a landing speed of fifty-plus knots in that field would have most certainly included ripping off the nose gear and probably flipping the plane on its back. Would we have survived?Probably. Would we be injured? Likely. Would the airplane be a total loss? Definitely.

My instructor then talked me through a chut pull at 500 feet AGL. Instead of fifty-plus knots forward speed, we’d touch down at maybe five knots forward speed and the plane would most likely remain upright. Would we have survived? Yes. Would we be injured? Not likely. Would the airplane be a total loss? Possibly.

I suddenly got it. There are plenty of situations where the best stick and rudder just won’t keep one from getting hurt. A parachute adds a new dimension to emergency situation recovery. In my landing scenario, the old school approach had a much higher chance for personal injury with no real difference in damage to the plane. The case for a parachute was made for me.

There’s still that problem of primacy. A good deal of training and deliberate preflight rehearsal is required to help one be prepared to take advantage of the capabilities of a parachute. There are plenty of parachute haters out there, but an honest assessment must lead one to accept the merits in many situations. As in all situations, let’s save injury to the people and make sure our insurance is paid up to care for the airplane.